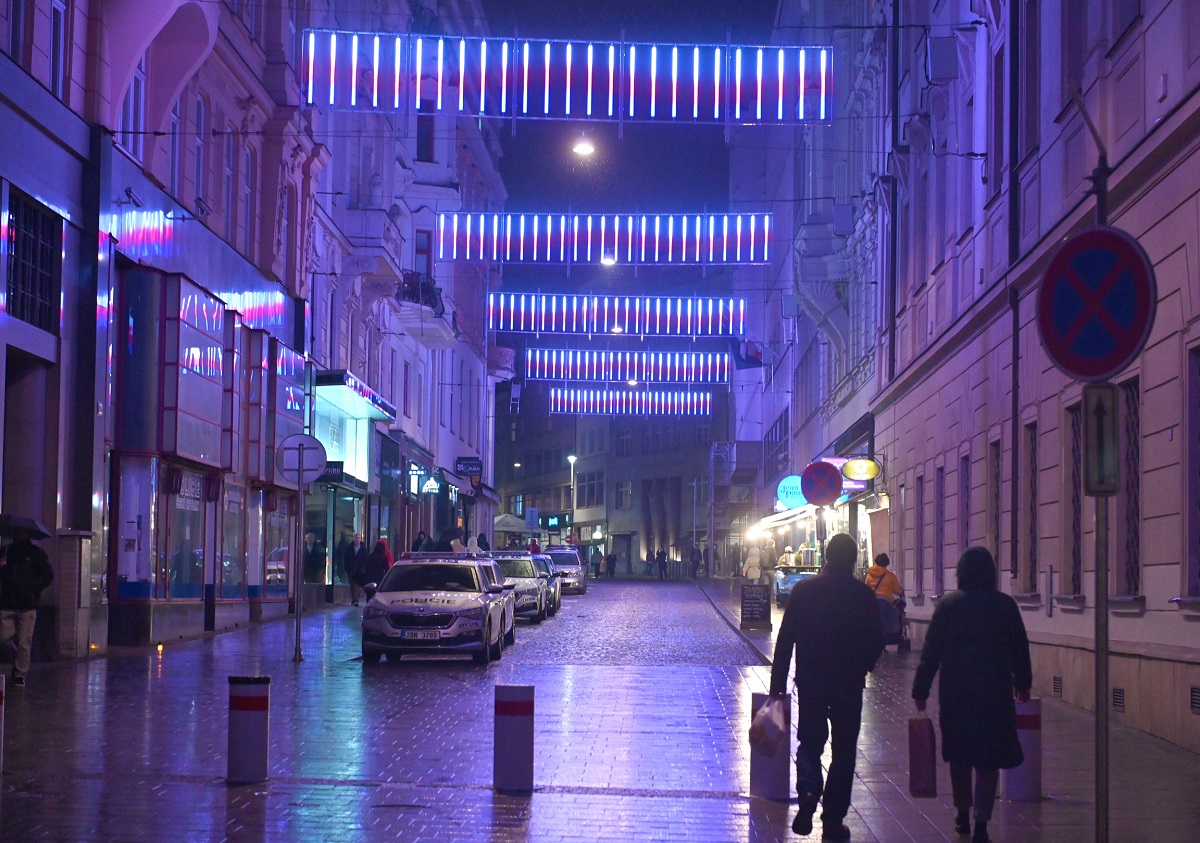 Brno, Nov 20 (BD) – Two years ago, Brno councillors approved a plan to create and install new festive lighting in the city centre. The garlands, whose design was chosen from an open competition, were lit for the first time on 17 November.

The festive street lighting in the centre of Brno has been in operation since 1959, and has been repaired several times during that time, even at the cost of losing its original character. The last major renovation took place 15 years ago, and another would be uneconomical given the overall design and technological obsolescence of the equipment.

“The chosen solution best represents the identity of Brno. Its basic expressive element is a simple line based on the uniform visual style of the city,” said Brno Mayor Markéta Vaňková. “The individual vertical light tubes can then be used to create various motifs referring to important personalities or events in Brno’s history and life. The new design of the garlands is designed with regard to current technical trends, modern technology, ease of repair and maintenance, and, of course, energy efficiency.”

According to Vaňková, the advantage of digital RGB LEDs is that their consumption can be regulated. The basic lighting mode will run at 40% power, and some animations can consume as little as a third of the power.

Since yesterday evening, different lighting schemes have been installed on different city centre streets, said René Černý, 1st Deputy Mayor. “The Sinfonietta, one of Leoš Janáček’s most famous orchestral compositions, will be visualised on Koblizna, while the depiction of DNA on Běhounská will recall the legacy of Gregor Johann Mendel. The motifs of the Brno city logo will feature on Česká and Masarykova. This scheme will be in place until 25 November, when it will be replaced by a display of falling snowflakes as part of the start of Brno Christmas,” said Černý.

The design of the new garlands came out of an open, two-phase design competition announced last September by the City of Brno together with Brno Technical Networks and MOBA Studio.

“The first phase was open to all potential participants without restrictions such as professional or technical qualifications,” said Councillor Filip Chvátal, who was one of the jurors. “It was about obtaining conceptual designs, the emphasis was on originality and artistic quality. From these, the jury then selected the four best ones and invited their authors to refine the technical design, demonstrate feasibility, and submit a budget. At the beginning of March this year, VISUALOVE’s project was evaluated as the best.”

In total, 36 garlands with 810 light tubes were created for five different streets in Brno.”The most modern digital LED technology was used, which makes it possible to control each pixel separately, of which there are 38,800 in total,” said Jan Machát, founder of VISUALOVE studio. “The garlands don’t just have to remain static, but also allow for moving animations. We can display different colours or, for example, fly flags for festive occasions, in addition to the DNA helix or the visualisation of the most famous Sinfonietta.”

The garlands took four months to make and assemble, and a month to hang. The lighting is not yet up on Středova, where construction work is underway.

“The connection of the hot water pipeline and sewerage system is to be completed by the end of the year, only then will it be possible to drive the platform and carry out the installation,” explained Miroslav Sečkář, Economic Director of Brno Technical Networks. “Finally, we will also complete the remote connection of all garlands with our central control room, from where all public and ceremonial lighting in Brno is controlled. This will allow us not only to continuously monitor and evaluate the functionality of the system, but also to change the lighting modes according to predefined scenarios.”

For the renovation of the ceremonial lighting, including the organisation of the centre, the City of Brno provided a subsidy of CZK 5,490,280 to Brno Technical Networks. This amount also includes the cost of organising a design competition of CZK 500,000.