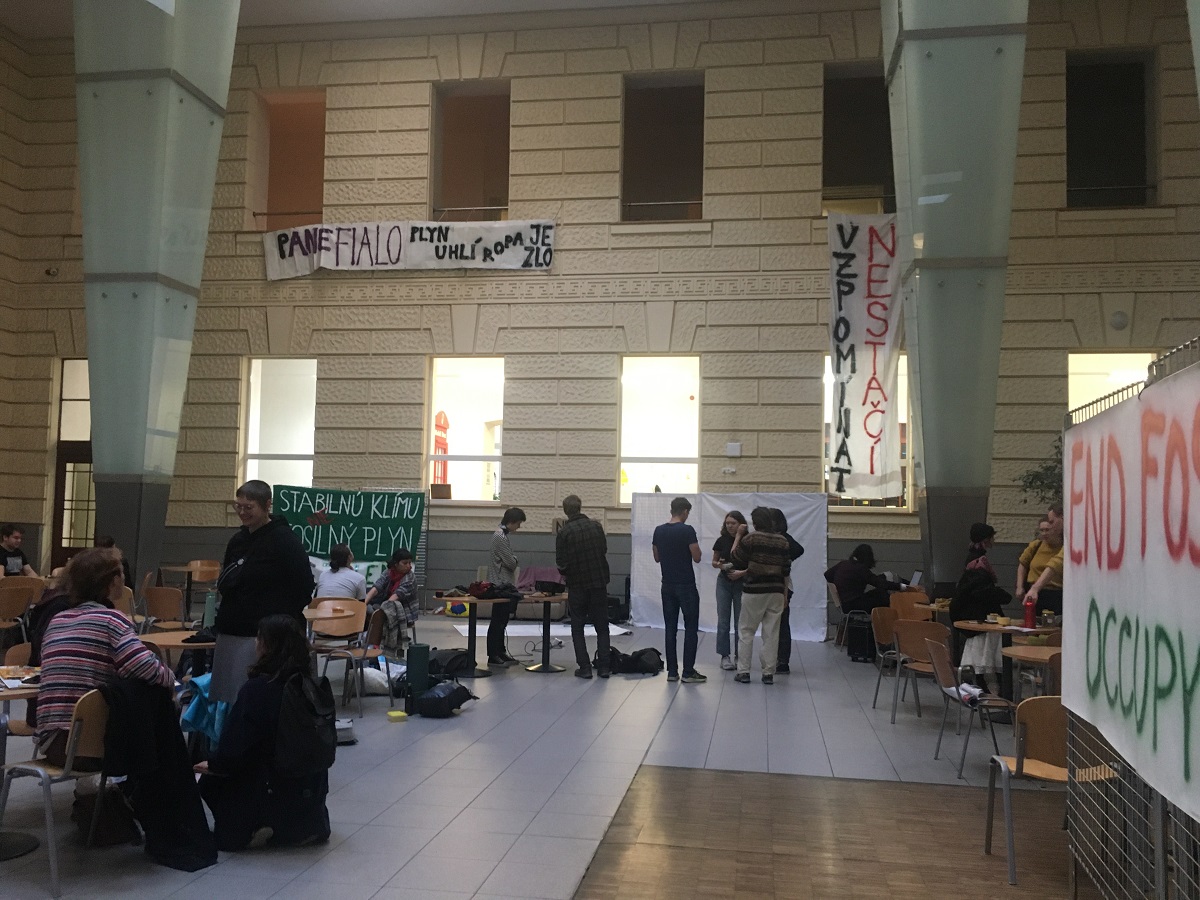 The strikes around the country are organised by the Univerzity za Klima collective. Photo credit: JS / BD.

Brno, Nov 15 (BD) – Student activists yesterday morning launched an “occupation strike for the climate” at several Czech universities, including Brno’s Masaryk University, calling for faster and bolder action from the Czech government to tackle the climate crisis, the soaring prices of energy, and growing social inequality.

Actions are taking place in Brno in MUNI’s Faculty of Social Studies (FSS MUNI), the Janacek Performing Arts Academy (JAMU), and the VUT Faculty of Fine Arts (FAVU). The strike, organised by the Univerzity za Klima (Universities for the Climate; UZK) collective has also been joined by university students from Prague, Olomouc, Usti nad Labem, Hradec Kralove and Plzen. The various occupations include programs of educational workshops, film screenings, discussions, lectures, and concerts, themed around climate change, energy poverty, social inequality, and the economic transformation of coal-mining regions in the Czech Republic.

The UZK Collective formed in 2019 at Prague’s Charles University, as a university-based offshoot of the Fridays for Future movement, which mainly concerned high school students. UZK’s first events were held later in 2019. The current actions are due to last until Wednesday, and will culminate with a march on Thursday, the national holiday to mark International Student Day.

“On International Student Day, we do not intend to just remember,” reads a statement on the UZK website. “We primarily want to offer an alternative to the current development. The future must not see the continuation of a system that leads to the destruction of nature and the disintegration of human societies. Solutions exist and we want to stand up for them.”

The collective is calling on the government to put the climate crisis as its priority and adopt bold measures to curb the greenhouse gas emissions which cause global warming. They say the government should set up a special ministry or establish the post of a government commissioner to coordinate the fight against climate change and its impacts.

The students also called on the government to close coal-powered power plants in the Czech Republic by 2033.

“All of us know that there is a need to close the coal-powered power plants and replace them with renewable sources of energy. The transformation must be fair and it must not hit working people or the most vulnerable population groups,” said student activist Anezka Lindaurova.

While most of the students’ demands are focused on the government, they are also demanding that universities expedite the insulation of buildings, start reducing energy consumption, and build their own capacities to generate energy from renewable sources. The students are emphasising that the strike is not targeted against the boards or staff of the faculties themselves.

In Prague, around 80 students gathered before midday yesterday at Jan Palach Square, carrying placards reading: “If the planet were a bank, politicians would save it”, “We want change, but not of the climate”, and “Our future is in your hands.” After reading the strike’s demands of the Czech government and university boards, the protesters chanted slogans such as “End to coal!” and “Climate justice”, before moving to their various faculties.

In Brno, students at FSS MUNI started their occupation strike for the climate on Monday morning in the atrium of the building on Joštova, with banners such as “Don’t grow”, “Withdraw from the Energy Charter” and “Wellbeing for all”, as well as several messages directed towards Prime Minister Petr Fiala (ODS), a former Dean of FSS MUNI. Initially, the atrium had been locked on the instructions of Dean Stanislav Balík, but it was opened at some point during the morning, and the students moved there from their temporary camp in the basement.

The occupation of the atrium followed negotiations between the activists and Balík. The Dean requested for the protest and cultural program in the atrium to take place only during the day, but the students consider the sleepover to be an essential part of their protest. It is acknowledged from both sides that the protest will not disrupt regular teaching activities in the faculty.

In a strongly-worded email to students, Balík said he agreed with the aims of the strike, but expressed concern about safety and the protection of health and property. He also called for students not to “abuse” the faculty space for “one sided presentation of views”, and argued that the description of the event used by the organising collective was inappropriate.

“Although I personally perceive climate change as a pressing and acute problem, I cannot support such a radical form of protest and the faculty will not join this initiative,” wrote Balik. “In the context of the ongoing real Russian occupation of Ukraine and in the context of the history of student strikes during the period of non-freedom (mainly 1968 and 1989), I consider the misuse of both terms – ‘occupation strike’ in the current situation – to be completely unacceptable.”

Petr Doubravsky, an activist involved in the occupation at FSS MUNI, told Brno Daily that UZK acknowledges the faculty as one of the better examples of sustainability in the university sphere, but as members of the academic community themselves, they wish to use the atrium as a shared and open public space to promote climate awareness and open academic dialogue.

“We believe that it’s our academic responsibility as university students to hold this protest and raise awareness of these facts, because science is not just about writing papers, but actually doing something about it,” said Doubravsky. “But also we feel it is part of our academic freedom.”

Regarding Balik’s comments about the inappropriate use of the atrium, Doubravsky added that: “The difference is that the Dean considers the faculty as his private property, while for us it is a common space, and everyone can be a part of this space.” He added that the student activists were attempting to use the space as a way to start academic discussion, which should be part of the atrium’s primary function.

He also defended the use of the term ‘occupation strike’, arguing that today’s climate protests should be seen as the successors to protests in 1939, 1968, and 1989, in the sense of young people laying claim to their futures.

“How I understand the occupation strikes in the past, is that the reason it was most of the time young people standing most loudly, most strongly, in all those examples, was that totalitarian society is somewhere where the future is impossible, where there is no future for young people, it doesn’t exist. It was clear then that there was no future without freedom, without democracy. But it’s the same case for us, there is no future for us without climate action that will actually keep us within this target of 1.5 degrees. We are all threatened, and it’s clear that the classic democratic ways are currently failing.”

He added that rulings of the Czech constitutional court have affirmed a “right to resist” when governments are not upholding the rights of their citizens, which the UZK collective argues applies in the case of climate action.

https://brnodaily.cz/2022/11/15/brno/student-climate-activists-occupy-faculty-buildings-in-brno-and-other-czech-cities/https://brnodaily.cz/wp-content/uploads/2022/11/FSS-occupation-nov22-feat-image-credit-JS-BD-1024x768.jpeghttps://brnodaily.cz/wp-content/uploads/2022/11/FSS-occupation-nov22-feat-image-credit-JS-BD-150x113.jpeg2022-11-15T10:25:55+01:00Jack StephensBrnoNewsBrno,Czech Republic,Environment,Politics,Protest,Students,SustainabilityThe strikes around the country are organised by the Univerzity za Klima collective. Photo credit: JS / BD. Brno, Nov 15 (BD) - Student activists yesterday morning launched an “occupation strike for the climate” at several Czech universities, including Brno’s Masaryk University, calling for faster and bolder action from the...Jack Stephens jack.stephens50@gmail.comAuthorA writer and English teacher originally from London who has lived in Brno since 2011, interested in politics, low culture, and all things strange and/or Czech.Brno Daily

A writer and English teacher originally from London who has lived in Brno since 2011, interested in politics, low culture, and all things strange and/or Czech.
View all posts by Jack Stephens →
« One Quarter of Czech School Teachers Feel Threatened by Burnout
Gender Inequality Persists on the Czech Labour Market, Says Human Rights Commissioner »