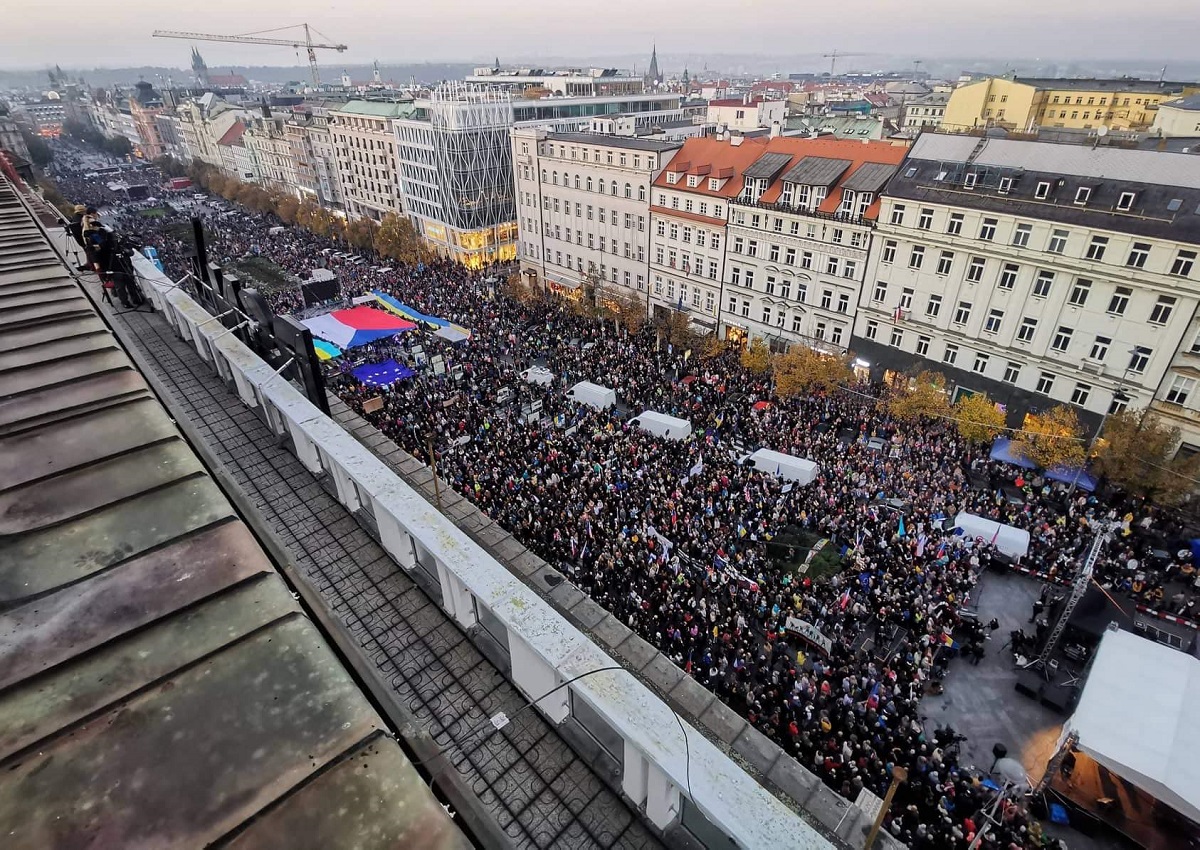 The protest was organised by the campaign group Million Moments for Democracy. Photo credit: Milion chvilek pro demokracii, via Facebook.

Prague, Oct 31 (CTK) – Ukrainian First Lady Olena Zelenska thanked the Czech Republic for its support for Ukraine in the face of the Russian invasion, in a video message to a demonstration organised by the Million Moments group in Prague’s Wenceslas Square yesterday. According to police estimates, the demonstration was attended by tens of thousands of people.

The Million Moments group said the event was “a protest against fear and hatred”, and wanted to express solidarity with Ukraine against the ongoing Russian invasion and highlight the importance of protecting democratic values.

Zelenska addressed the event in Prague online, via video message. She stressed that as long as people do not shut their eyes to the war, the light will keep burning.

Ukraine is experiencing the darkest period in its history, she said, noting that Russian missiles have been targeting power and heating plants in recent weeks. “They want to deprive us of light. Freeze us. Intimidate us,” she said.

However, Russia is fighting a light that will never go out, she added. She cited the examples of a power outage after attacks during a concert of the Lviv Philharmonic, when musicians finished the program under torchlight, and an exhibition opening in Kyiv to which people brought their own candles and torches.

It is probable that Ukrainians will spend the upcoming northern winter in the dark, she noted. “However, we do not let Russia draw us and the whole world into darkness. The same darkness in which Russia has been living for many years. Darkness will never win,” she said.

“As long as people all over the world do not turn a blind eye to our war, our light will never go out,” she said, adding that those who were in Wenceslas Square yesterday had “glittering eyes and burning hearts”.

“I, along with millions of Ukrainians, thank you for this support today. This is living evidence that it is impossible to take the light from those who have it inside,” she added.

The police estimate that a few dozen thousands of people attended the two-hour demonstration, about the same attendance as an anti-government rally on Friday. However, a CTK reporter on the spot said the square was more crowded than on Friday.

The participants carried Czech, Ukrainian and EU flags. Giant ten-metre flags of the Czech Republic and Ukraine were unfolded in the upper part of the square. Speakers appeared in front of banners reading “Czech Republic against Fear” and “We Can Do It!!”.

Senior political figures at the demonstration included Milos Vystrcil (ODS), who is expected to be re-elected soon as the Senate chairman.

PM Petr Fiala (ODS) wrote on Twitter that it was encouraging that so many citizens care about the direction of Czech society.

Million Moments founders Mikulas Minar and Benjamin Roll also addressed the demonstration, calling on the public not to be afraid, not to succumb to manipulation and “the merchants of fear” as they labelled the organisers of Friday’s anti-government rally.

Ukrainian Katarina from Donetsk, who has been a refugee for eight years and has not been home since 2014, told her story to the crowd. She thanked the Czech Republic for its welcome, adding: “Long Live the Czech Republic”.

Other Czech personalities sent video messages to the demonstrators, including legendary playwright, poet and musician Jiri Suchy, who called for courage.

Young singer Adam Misik sang the Czech national anthem at the end of the demonstration, followed by the anthems of Slovakia and Ukraine, which were also performed live.

More than 100 police officers, including uniformed police, detectives and anti-conflict personnel, were monitoring the rally.

The Million Moments group convened several previous events in support of Ukraine shortly after the Russian invasion in February, each attended by thousands of people.

The “Million Moments for Democracy” campaign group was established after the general election in 2017, won by Andrej Babis’s ANO. The group staged protest demonstrations criticising PM Babis for his conflicts of interest and failure to keep pre-election promises. In June 2019, the group’s biggest demonstration so far, in Prague’s Letna park, was attended by around 250,000 people.

On the national holiday on Friday, 28 October, a three-hour protest rally against the Fiala government was held in Wenceslas Square, with an estimated several dozen thousand participants filling the upper part of the square.