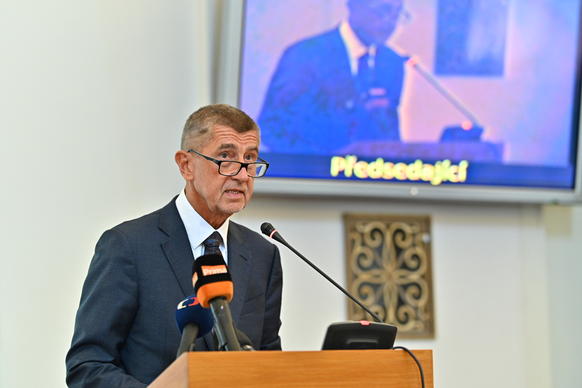 Until today, Babis had neither ruled out nor confirmed his presidential candidacy. Photo credit: vlada.cz

Prague, Oct 31 (CTK) – Former Prime Minister and leader of the opposition ANO party Andrej Babis finally confirmed in an announcement on TV Nova last night that he will run for the Czech presidency. He said he would ask the ANO leadership for their approval on Monday, and subsequently ask ANO MPs to support his candidacy.

Babis, 68, one of the richest businessmen in the country, is currently on trial at the Prague Municipal Court over suspected EU subsidy fraud related to the Capi hnizdo (Stork Nest) case. He said his main reason for running for president was to defend citizens’ interests.

“When I see how the government is not working, how it is not helping people, how passive it is, I have decided to go ahead,” Babis said. He added that, ever since moving into politics, his only goal has been to improve the lives of people in the country.

He said during the announcement that he does not have high chances of being elected. “However, I am a strong fighter and will do the utmost to persuade people that I am a good candidate for president,” he added.

Presidential bids must be submitted by 8 November, supported by the signatures of at least ten senators, 20 deputies, or 50,000 citizens.

ANO will hold a press conference on Monday to officially announce its presidential candidate. Before that, the party leadership is to debate and approve the proposal.

Until today, Babis had neither ruled out nor confirmed his presidential candidacy.

Babis met President Milos Zeman at the Lany presidential residence yesterday afternoon. The contents of their meeting was not released officially, but Babis told Nova later that he and Zeman had debated the current developments in the world and in the Czech Republic, mainly the economic situation, living standards of citizens and the actions of the government.

According to reports from Seznam Zpravy, the ANO headquarters has issued instructions to its regional organisations to seek suitable locations for Babis’s next tour of the Czech Republic to start in November. Babis toured the country in a caravan in the summer, though he denied this was part of his campaign for the presidential election.

Politicians from other parties reacted negatively to Babis’s announcement. Marketa Pekarova Adamova, Speaker of the Chamber of Deputies and leader of TOP 09, wrote on Twitter that she was surprised that Babis had announced his presidential candidacy before it was approved by the ANO leadership. Meanwhile, Prime Minister Petr Fiala tweeted: “In democratic countries, politicians who are under prosecution leave. Andrej Babis is seeking immunity at Prague Castle. And the Czech Republic does not deserve this.”

The first round of the presidential election in the Czech Republic will be held on 13-14 January 2023, with a second round two weeks later if required.