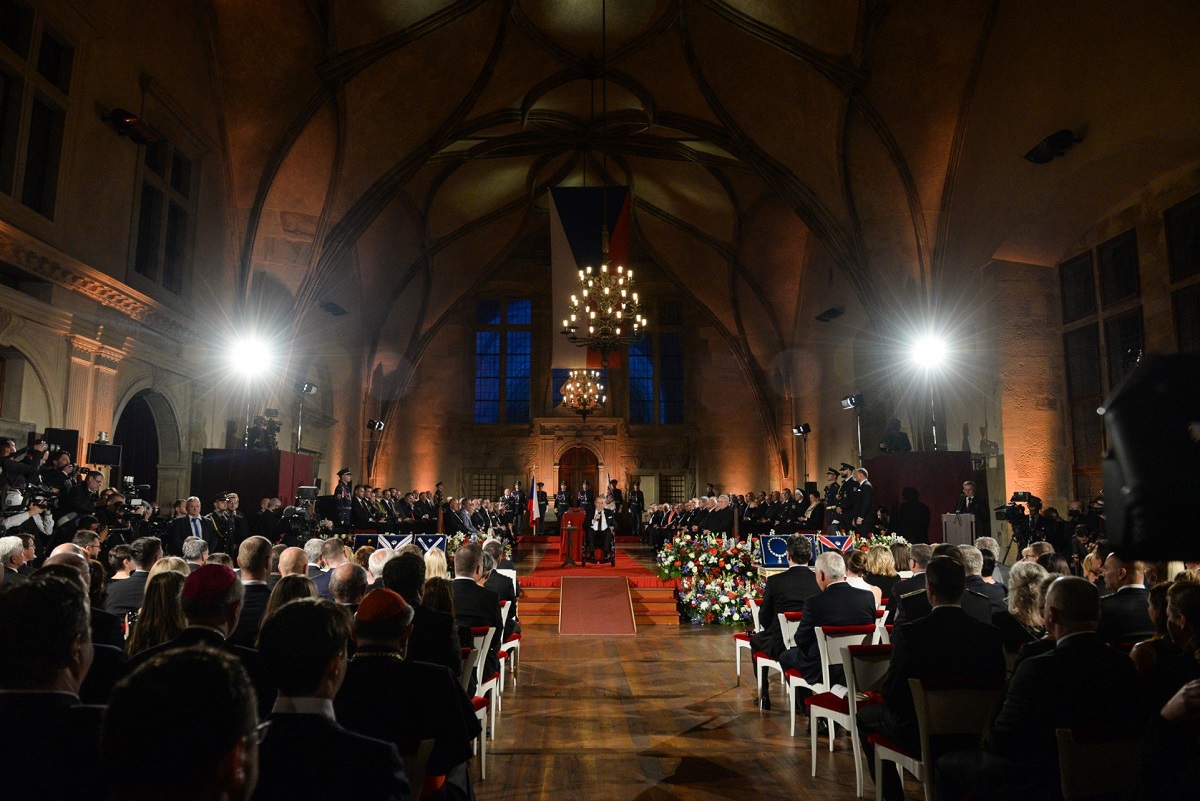 Zeman, whose second and final five-year mandate expires in March, yesterday presented the highest number of state orders and medals of his ten years in office, decorating a total of 78 people. Credit: Milos Zeman, via Facebook.

Prague, Oct 28 (CTK) – Yesterday evening, in a ceremony a Prague Castle to mark Czechoslovak Independence Day, President Milos Zeman presented the supreme honour of the Czech state, the Order of the White Lion, to Ukrainian President Volodymyr Zelenskiy, as well as in memoriam to a number of Czech wartime resistance fighters and pilots.

Zeman, whose second and final five-year mandate expires in March, yesterday presented the highest number of state orders and medals of his ten years in office, decorating a total of 78 people, compared to the next highest number of 42, in 2019. Zeman thus exceeded the number of orders and medals given by his predecessors, Vaclav Havel and Vaclav Klaus, in the last year of their presidency, but did not beat Havel’s record from 1998 of decorating almost 90 personalities to mark the 80th anniversary of the Czechoslovakia state.

The Order of the White Lion was awarded to members of the legendary Three Kings anti-Nazi resistance group: Josef Balaban, Josef Vladimir Masin and Vaclav Moravek. Balaban and Masin were executed in 1941 and 1942, while Moravek committed suicide before being arrested by the Gestapo in 1942. As Josef Masin’s daughter Zdena Masinova refused to receive the order from Zeman, Defence Minister Jana Cernochova (ODS) did so at the ceremony.

The supreme state order was also presented to fighter pilot and aerobatics champion Josef Hubacek, who was a member of an aerobatics trio and world champion before WWII, and another WWII pilot Josef Stehlik, who fought in France, Britain and on the Eastern front, as well as to legionnaires and anti-Nazi resistance fighters Karel Lukas and Vojtech Luza.

Three medals of heroism were bestowed on voluntary firefighters and police officers for assisting during the South Moravian tornado and extensive forest fire in the České Švýcarsko National Park, as well as on Roma anti-Nazi fighter Josef Serinek, imprisoned in the Roma concentration camp in Lety, south Bohemia, during WWII, and resistance fighter Tomas Houska. From modern-day Czech soldiers, Zeman decorated special force officer Petr Matous, who successfully disarmed a terrorist in Afghanistan.

Two volunteer firefighters, Jaroslav Fila and Marek Vrba, who tragically died in a family house explosion in south Moravia, and Miroslav Fenik, who died in a fire of his own house trying to save his wife and son, were decorated posthumously. A medal of heroism also went to two men risking their own lives to save other people, and a forest company employee who found a lost eight-year-old German girl in a border forest.

The president also presented several dozens of medals of merit, including to the late singer Hana Zagorova and Slovak-born musician Miroslav Zbirka, posthumously.

Another medal of merit in memoriam was bestowed on Czech-American businesswoman Ivana Trump, a former wife of US president Donald Trump. Their daughter Ivana Marie Trump and son Donald Trump Jr accepted the medal on behalf of their late mother.

New laureates of the medal of merit in the field of sport are Czech tennis player Ivan Lendl, now living in the United States, and hockey player Jiri Holik.

Zeman also decorated doctors Miroslav Zavoral and Miloslav Kalas, the main physicians responsible for looking after his health. As tradition, he gave medals to his aides, such as the Presidential Military Office head, lieutenant general Jan Kase, and to Jaroslav Tresnak and Oldrich Lichtenberg who helped sponsor his presidential campaign.

The president also bestowed a medal of merit on physician and former politician Boris Stastny, from the Senior Home Group, for providing medical care to Zeman in the presidential summer residence in Lany near Prague.