Ukrainian Protests in Brno: The Poignant Arsenal of the Ordinary 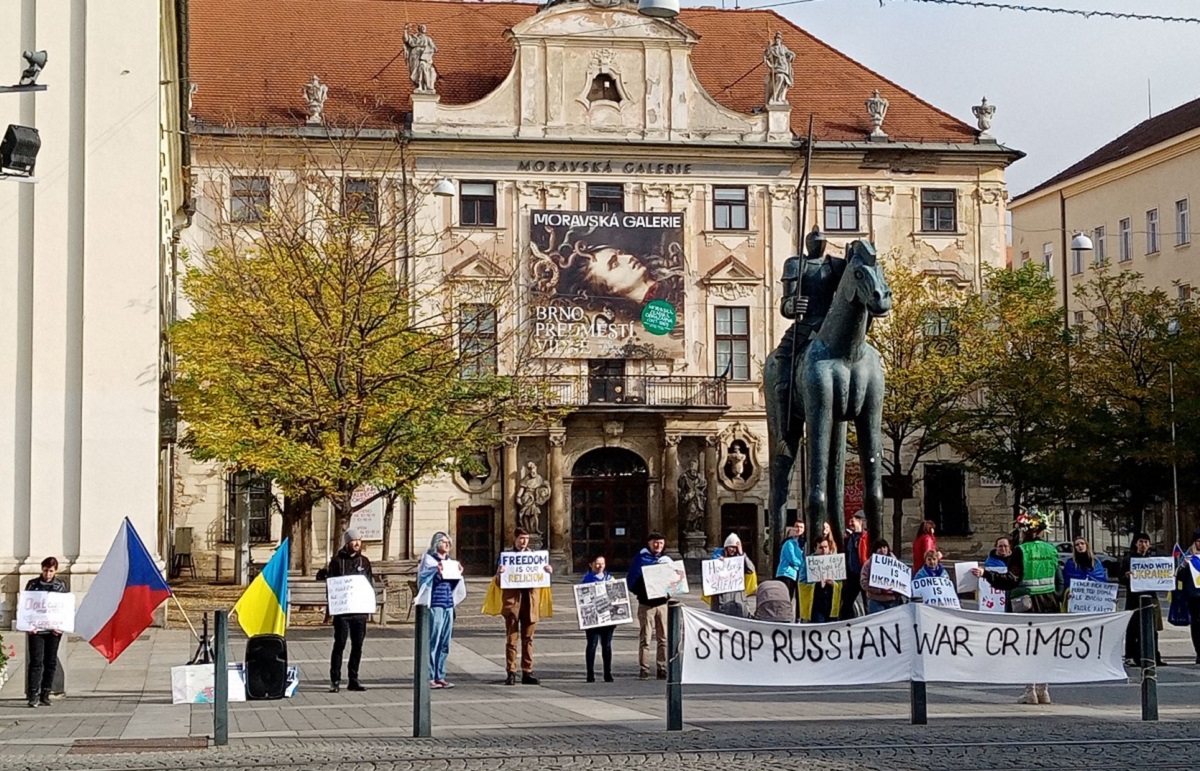 Since the beginning of the Russian invasion, Ukrainian protesters have gathered every Sunday in the squares of Brno in sombre witness to the events taking place in their homeland. In this report, Brno Daily’s Cathy Khoury-Prinsloo reflects on the meaning and power of these symbolic protests from ordinary people. Photo credit: Cathy Khoury-Prinsloo.

Brno, Oct 25. (BD) – War paint. We immediately think of brutal black smears and camouflage stripes. Who would have thought that delicate blue and yellow eye shadow could be an extremely effective, patriotic and poignant war paint?

It is when it is worn by Mariia Korotkova. This young Ukrainian woman wears blue eye shadow on her eyelids, and yellow eye shadow under her eyes, the colours of the Ukrainian flag, every Sunday. She leads a peaceful protest demonstration against Russia’s invasion of her home country in Brno town squares. The aim of the protest is to highlight the conflict and encourage ongoing support for Ukraine.

Mariia also wears a traditional Ukrainian wreath (or “Vinok”), where every flower or plant holds deep meaning. It is a visual emblem of hope that one day peace will return. She talks with emotion about the inclusion of wheat stalks symbolising the huge wheat fields of Ukraine, which produce great harvests exported around the world during peace time.

There are also poppies for remembrance in the Vinok, and some other flowers.

Before we take photos, she asks if she can please first put on the wreath. “It is important that I wear it.”

Her flight jacket is called a Konotop Witch, after a feisty female character with magical powers in a 19th Century Ukrainian story. The jacket is decorated with several humorous badges about a fantasy female “air force” of witches.

However, the badge on Mariia’s left arm comes from her father, from the regiment he is fighting in, and it means the world to her.

This is her uniform – make-up, wreath, flight jacket and badges.

Her small group of about 30 people of all ages wear Ukrainian flags around their shoulders. Their arsenal is the ordinary. They stand in a line for several hours, in front of a large hand-painted banner “Stop Russian War Crimes.” They hold up home-made signs that read, “Stand with Ukraine, Brno”, “How long will you be Silent”, “Donetsk is Ukraine” and “Luhansk is Ukraine”.

They bring their children in prams to take part in the demonstration. They bring one big speaker and other musical equipment to play Ukrainian songs. They set up a large Czech and Ukrainian flag together.

Mariia explains the urgency of these demonstrations. “Every drop of Russian oil is paying for weapons bombarding Ukraine. Usually there are norms and conventions in war. But Russia is dropping bombs on kindergartens. That is why we have to get the world to impose even more and tougher sanctions, to see that this is not a war – it is terrorism.”

”We are really so thankful to the whole world for its support, and especially to the Czech Republic and other countries, but we still need more support,” she adds.

A few people in the group pose for photos. Some smile, some are more sombre.

After the demonstration everything is carefully and neatly disassembled, and packed into portable parcels. Portable property.

This Sunday the Ukrainian group stood on Moravské Náměstí. It is such a very symbolic place to stand, on a sunny autumnal morning in Brno.

They stood in front of the historic and beautiful Church of Saint Thomas, the bronze statue of Courage the horse and his rider Jobst of Moravia, and the Moravská Galerie – once Napoleon Bonaparte’s military headquarters, now an art gallery.

Brno is a city so rich in history. It too has known many invasions and occupations. It has also seen the terrible horrors of war. There are many heart-breaking memorials to victims of World War II – plaques on buildings, monuments and the brass “stumbling stones” identifying the homes of Brno’s Holocaust victims.

https://brnodaily.cz/2022/10/25/lifestyle/ukrainian-protests-in-brno-the-poignant-arsenal-of-the-ordinary/https://brnodaily.cz/wp-content/uploads/2022/10/ukrainian-protest-moravske-namesti-credit-cathy-khoury-prinsloo-1024x658.jpghttps://brnodaily.cz/wp-content/uploads/2022/10/ukrainian-protest-moravske-namesti-credit-cathy-khoury-prinsloo-150x96.jpg2022-10-25T13:20:26+02:00Cathy Khoury-PrinslooBD MagazineBrno,Crisis in Ukraine,Politics,Protest,UkraineSince the beginning of the Russian invasion, Ukrainian protesters have gathered every Sunday in the squares of Brno in sombre witness to the events taking place in their homeland. In this report, Brno Daily's Cathy Khoury-Prinsloo reflects on the meaning and power of these symbolic protests from ordinary people....Cathy Khoury-Prinsloo cathykp7@gmail.comAuthorBrno Daily