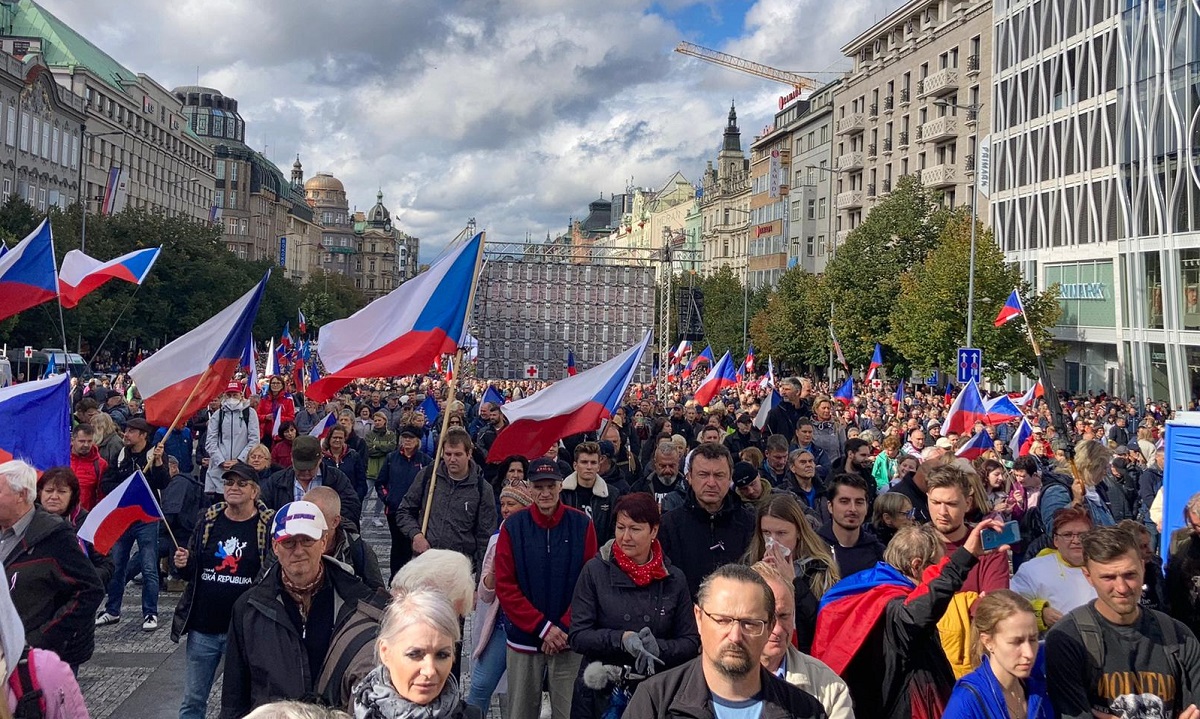 The protesters have called their movement “non-violent revolution”, and have planned another protest for 28 October. Photo credit: KSCM via Facebook.

Prague, Sept 29 (CTK) – Tens of thousands of people attended an anti-government rally  on Prague’s Wenceslas Square yesterday, demanding the resignation of the coalition cabinet and reversal of the current political course of the Czech government.

The protest was organised by the group Czech Republic First.

In early September, a similar rally was attended by about 70,000 people. The police said “some tens of thousands” of people came to the rally yesterday.

The organisers said that they would go to President Milos Zeman on 10 October and ask him to dismiss Prime Minister Petr Fiala’s coalition government and call an early election.

They have called another protest for 28 October.

Interior Minister Vit Rakusan (STAN) said that fear was understandable at an uncertain time, but he denounced disinformation and asked people not to be used by manipulators with offers of unrealistic solutions.

“We want to make a complete reversal of the political course in our country. We want to achieve this change in a non-violent way,” said organiser Jiri Havel.

Another organiser, Ladislav Vrabel, said the government should tender its resignation, new elections should be called and the control of the country should go to “patriotic experts.”

The first speech was delivered by Miroslav Sevcik, dean of the Prague University of Economics and Business. The crowd was also addressed by a former head of the Agrarian Chamber, Zdenek Jandejsek.

The demonstration started with the Czech national anthem, sung by Tomas Ortel, at 2pm.

The protesters carried Czech flags and banners against the government, bearing slogans such as “End of the government sick in spirit, brains and character.”

At the protest, the Communist party was running a stand to gather signatures in support of their presidential candidate Josef Skala.

The organisers describe themselves as independents, and have called their protest Non-Violent Revolution.

They have demanded the signing of gas treaties directly with Russia, Czech departure from NATO, the EU, the United Nations and the WHO, voluntary vaccinations, and an end to the “planned thinning of the nation” by Ukrainian refugees.

They also demanded food self-sufficiency and “liberation” of domestic industry from “dependence” on foreign corporations.

The protesters chanted “resignation,” “shame on you” and “thieves.” Speakers complained about oppression, censorship and totalitarianism, and condemned the delivery of arms to Ukraine.

The protesters were supported by an MEP for the Alternative for Germany (AfD), Christine Anderson, and German AfD deputy Petr Bystron.

Bystron said they were fighting “for family, god, homeland and our freedom”, and he and other speakers expressed support for former US President Donald Trump.

Organisers said the event at the Wenceslas Square was also being broadcast live at jumbotrons in the centres of Brno, Plzen, Liberec, Ceske Budejovice, Uherske Hradiste, Karvina, Havirov and Nejdek.

In Brno, an anti-government demonstration was attended by about 1,500 people. The participants also carried flags of the Czech Republic and Moravia.

One of the banners read “Fiala, that’s enough, you are war-mongers.”

« Over 87,700 Ukrainian Refugees Are Currently Working In Czech Republic, Says Labour Office
Brno Joins Other Cities This Friday Night For “Noc Vědců”, Devoted To The Promotion of Science »