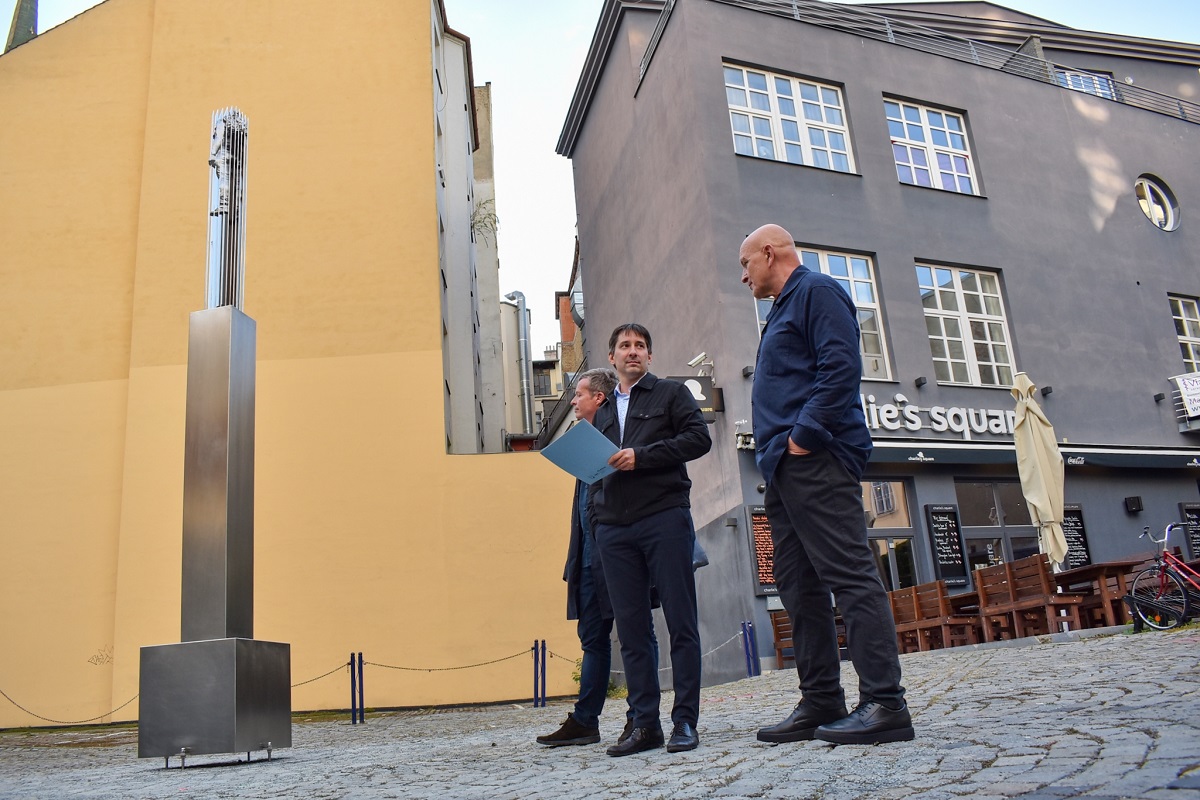 The statue made with a blend of traditional and modern techniques is being exhibited in Brno. Photo Credit:Brnostred

Brno, Sept. 23 (BD) – A new work of art has been added to the public space in the centre of Brno; the statue “Levitation” by sculptor Michal Gabriel has been placed in Římské náměstí in the central district of Brno, thanks to the donor organisation Kávéeska.

The statue is made of stainless steel and is installed on a high pylon of the same material. Made in 3D and modelled to a total height of over four metres, the object presents a figure of a girl looking up at the sky, woven into a slatted column. The statue embedded in the slats is always visible at a certain angle when walking around the object and requires the active involvement of the observer.

“We will have the ‘Levitation’ statue on loan for a year for Římské náměstí. With this sculpture we are opening another public Gallery Římák, where sculptors will rotate at certain intervals, as it has been working for several years on Šilingrovo náměstí in the Gallery Šilingrák,” said Vojtěch Mencl, Mayor of the Brno-Central district.

The sculpture was created thanks to the support of Rudolf Kasper, one of the leading patrons of art in East Bohemia. The first presentation of “Levitation” was in the Sculpture Gallery in 2016, and it was placed on the square in Hořice in the Hradec Kralove region.

“Michal Gabriel’s work has increasingly focused on finding new ways of creating work using digital technologies,” said Lucie Pangrácová, curator and director of the Trutnov City Gallery. “This ‘levitation’ statue is an example. In the column made of a grid of slats, a female figure appears until it is rendered with photographic precision, which gradually disappears when viewed from a different angle and only the column remains visible. Despite the high real weight due to the properties of the material used, the figure hidden inside the column looks light, ephemeral, almost like a hologram.”

https://brnodaily.cz/2022/09/23/culture/new-statue-levitation-installed-in-rimske-namesti/https://brnodaily.cz/wp-content/uploads/2022/09/levitation-statue-1024x683.jpghttps://brnodaily.cz/wp-content/uploads/2022/09/levitation-statue-150x100.jpg2022-09-23T16:55:04+02:00Bing NiArt & CultureArt,Brno,CultureThe statue made with a blend of traditional and modern techniques is being exhibited in Brno. Photo Credit:Brnostred Brno, Sept. 23 (BD) - A new work of art has been added to the public space in the centre of Brno; the statue “Levitation” by sculptor Michal Gabriel has been placed...Bing NiBing Nibingni1992@gmail.comAuthorPh.D student in Communication Studies, a hopeless cinephile and frontier culture fanatic and fussy music appreciator.Brno Daily