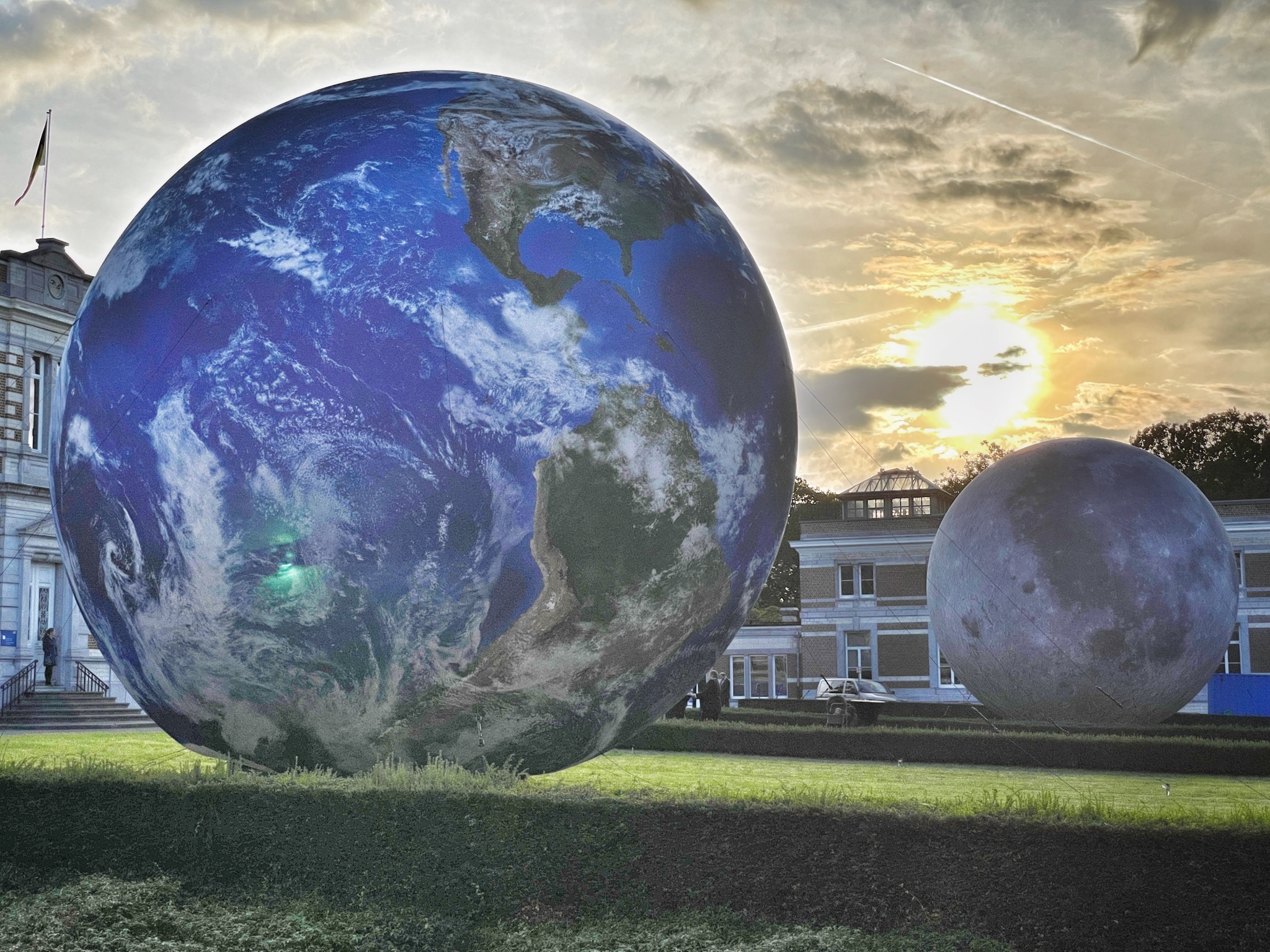 Terralóna and Lunalón, Brno’s famous inflatable models of the Earth and Moon, will be on display in Brussels this week. Photo credit: JMK.

Brno, Sep. 22 (BD) – This week, from 19-25 September, as part of the Czech Presidency of the Council of the European Union, Brno’s famous large-scale inflatable balloons Terralóna and Lunalón, representing the Earth and Moon, are on display at the Royal Belgian Observatory in Brussels, to symbolise Brno’s space industry and the field of science and research. The models were lent to Brussels by the Brno Observatory and Planetarium.

On Tuesday, 20 September, an evening reception with notable guests was held to mark the beginning of the exhibition. After the opening song “Fly Me to the Moon”, the reception was opened with a speech by the director of the Royal Belgian Observatory, Ronald Van der Linden. He was followed by Lucie Fojtová from the Brno Observatory and Planetarium, who said that each Lón weighs about 150 kg, is made of balloon material, and holds about 600 kg of air. The closing speech was delivered by Vendula Nováčková from the South Moravian Region’s EU Office, who described the high-level space industry in the South Moravian Region, the Brno Space Cluster, and the reputation of the region as a centre of innovation and education.

The exhibition was accompanied by educational boards describing space bodies, and the Brno region as the main driver of the space industry in the Czech Republic. The exhibition also celebrated the 1,200th anniversary of the founding of Moravia. Jiří Hlavenka, South Moravian regional councillor for science, research, innovation and IT, greeted the event via videolink.

Refreshments during the reception included traditional Moravian specialties prepared by Brno high school students, served with a selection of South Moravian wines. During the reception, there was also a presentation and tasting of fruit distillates from the RIPER family distillery. The grounds of the family-owned craft distillery are located in the picturesque South Moravian village of Syrovice near Brno, and the distillery uses high-quality fruit from local growers.

Alongside the large-scale balloons, the exhibition has a small accompanying educational demonstration presenting a description of the displayed space bodies, the space industry in the South Moravian region (Brno Space Cluster), and the narrative of the region as a centre of innovation and education.

The Royal Belgian Observatory’s planetarium will host the international travelling exhibition of the Arnošt Lustig Endowment Fund, entitled “I Want To Be Human: Arnošt Lustig’s message to the stars and everyone else”. The exhibition presents the “Czech calling card” of humanism and universal values, through the legacy of the writer and Holocaust witness Arnošt Lustig, and takes place in partnership with the South Moravian Region’s EU Office, the Czech School without Borders in Brussels, the Czech Literary Center, and the Brno Observatory.

The main partner in the promotion of Brno’s space industry is the Brno Observatory, one of 18 member organisations of the Brno Space Cluster, which acts as one entity to obtain commercial orders, popularise the space industry, and provide education. The Space Cluster is now also a member of the European Space Agency, working to increase Czech involvement in the agency’s work. “Let’s be proud of the Brno region, not only as a wine region but also because there are a lot of technologically superior companies,” commented Václav Havlíček, the manager of the Brno Space Cluster.

The entire exhibition is taking place under the auspices of the Czech Presidency of the Council of the EU and the Minister for European Affairs of the Czech Republic, Mikuláš Bek.

https://brnodaily.cz/2022/09/22/brno/brnos-terralona-and-lunalon-balloons-exhibited-at-royal-belgian-observatory-in-brussels/https://brnodaily.cz/wp-content/uploads/2022/09/baloons-planet-exhibition-brno-1024x768.jpghttps://brnodaily.cz/wp-content/uploads/2022/09/baloons-planet-exhibition-brno-150x113.jpg2022-09-22T10:33:36+02:00Jack StephensBrnoBalloon,Brno,Czech Republic,EU,Royal Belgian Observatory in BrusselsTerralóna and Lunalón, Brno’s famous inflatable models of the Earth and Moon, will be on display in Brussels this week. Photo credit: JMK. Brno, Sep. 22 (BD) - This week, from 19-25 September, as part of the Czech Presidency of the Council of the European Union, Brno’s famous large-scale inflatable...Jack Stephens jack.stephens50@gmail.comAuthorA writer and English teacher originally from London who has lived in Brno since 2011, interested in politics, low culture, and all things strange and/or Czech.Brno Daily

A writer and English teacher originally from London who has lived in Brno since 2011, interested in politics, low culture, and all things strange and/or Czech.
View all posts by Jack Stephens →
« Police Charge 40 Czech Citizens Over Support For The Invasion of Ukraine
MUNI Faculty of Informatics Hosts International Conference On Open Source Technologies »