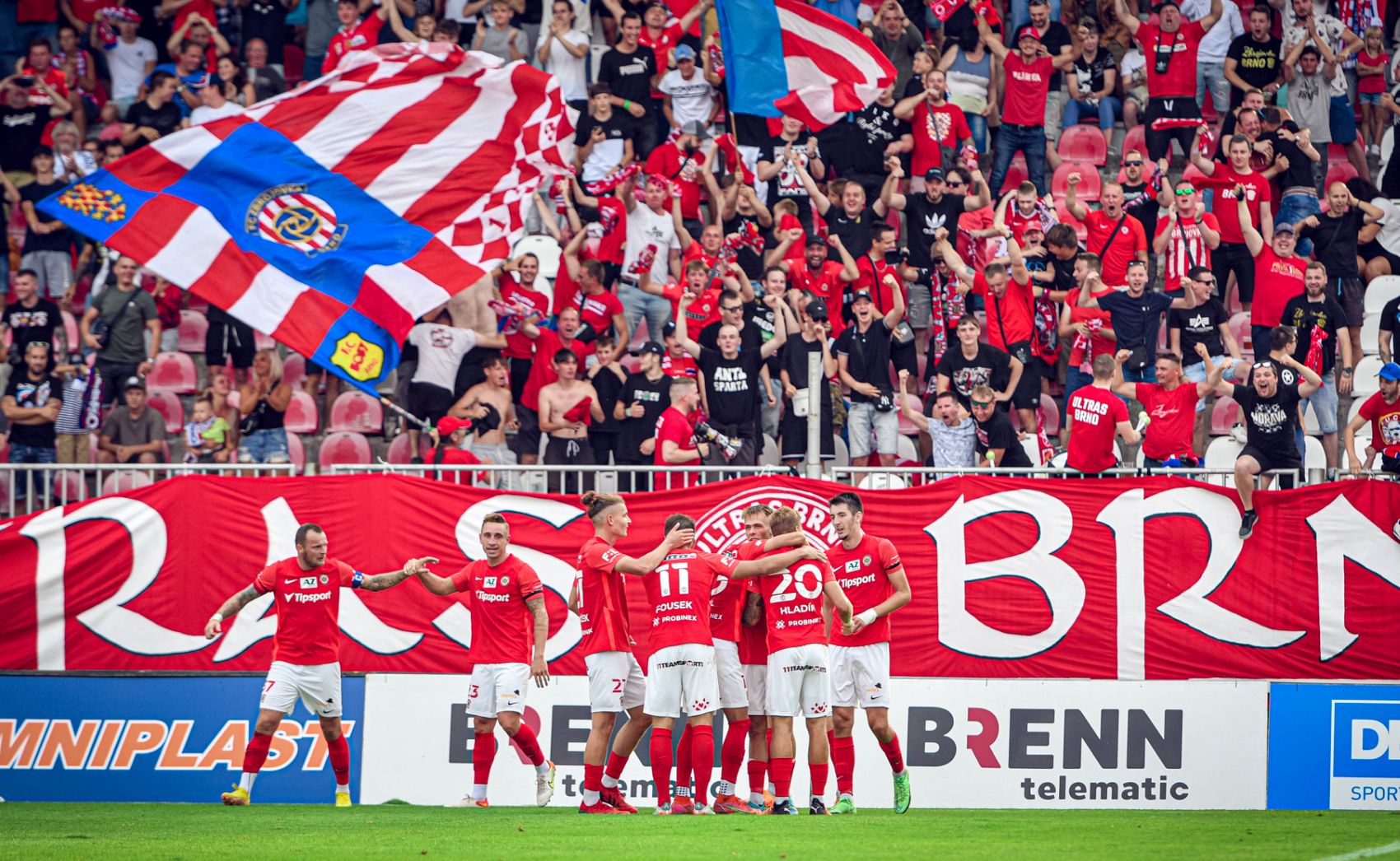 Brno, Aug. 26 (BD) — An event-filled Fanzone will start the festivities. Refreshment stands have been added throughout the Adax Invest Arena. Police will be out in force. And thousands and thousands of Brno football fans will roar into the night when FC Zbrojovka hosts Slavia Praha on Sunday at 7pm.

It is unlikely that the country’s record attendance of 44,120 (set in 1996 in a game between these two teams) will be broken, but it is a good bet that Zbrojovka fans will try their hardest to fill the current stadium to its capacity.

Defending champions SK Slavia Praha are currently, as expected, atop the standings with a 3-0-1 record through four matches. They have scored 14 goals, the most in the league, and conceded only four.

FC Zbrojovka Brno were not expected to perform as well as they have in their return to the Fortuna Liga. They are 2-1-0, with seven goals scored and three conceded through three games. Zbrojovka started the season with a 2-2 tie against Moravian rival 1.FC Slovacko, then beat SK Sigma Olomouc on the road, 0-2, and came from behind in front of a home crowd to beat FK Mladá Boleslav by 3-1 on 13 August. Last weekend’s game against FC Viktoria Plzeň was postponed due to an international scheduling conflict.

20-year-old midfielder Michal Ševčík is establishing himself as a rising star for Brno, with three goals. Veteran Jakub Řezníček has a goal and two assists. And goalkeeper Martin Berkovec has let in just three goals in 270 minutes of play.

Importantly, coach Richard Dostálek has the team believing in itself and he has so far made the right moves.

Brno football teams have traditionally attracted many fans. It set the national record for attendance on 2 October 1996, when Boby Brno tied Slavia 1-1 at Stadion Za Lužánkami in front of 44,120 fans. That stadium, which is still standing but unavailable for regular use, is the beating heart of the team, which still sings songs about its glory days.

There will be many additional activities on Sunday. At 5pm, the gates of the Fanzone will open behind the western tribune, accessible from Vodova.

There will be an autograph session with UFC champion Jirka “BJP” Procházka. A large screen will show the active Fortuna Liga matches.

Actor and Zbrojovák Alan Novotný will present the whole program. Fans can also compete in various events for prizes.

Get your tickets on the team website to avoid lines.

Draci Have Advantage in Czech Series

The battle of Brno teams has come down to the final weekend. The Draci have a three-games-to-two lead in the best of seven Czech baseball series. They need to win either of the final two games to take their 23rd national title.

Cardion Hroši Brno, however, have been playing good ball for the past few months, and cannot be counted out.

Game 7, if necessary, would be Saturday in South Brno at 1pm.

https://brnodaily.cz/2022/08/26/events-in-brno/sports-round-up-fc-zbrojovka-expects-huge-crowd-on-sunday-for-face-off-with-slavia/https://brnodaily.cz/wp-content/uploads/2022/08/FC-Zbrojovka-hosts-Slavia-Praha-fotball-soccer-Photo-credit-FC-Zbrojovka-Brno-1024x630.jpghttps://brnodaily.cz/wp-content/uploads/2022/08/FC-Zbrojovka-hosts-Slavia-Praha-fotball-soccer-Photo-credit-FC-Zbrojovka-Brno-150x92.jpg2022-08-26T10:33:30+02:00Bruno ZalubilBrnoEvents in BrnoSportBrno,SportThousands will head to Kralovo Pole on Sunday evening when FC Zbrojovka hosts Slavia Praha. Photo credit: FC Zbrojovka Brno Brno, Aug. 26 (BD) — An event-filled Fanzone will start the festivities. Refreshment stands have been added throughout the Adax Invest Arena. Police will be out in force. And thousands...Bruno ZalubilBruno Zalubilbzalubil@hotmail.comAuthorA connoisseur of the unpredictable and unscripted drama of sports.Brno Daily

A connoisseur of the unpredictable and unscripted drama of sports.
View all posts by Bruno Zalubil →
« Printed Commercial Advertising To Be Banned From The Centre of Brno
Half of Ukrainian Refugees In The Czech Republic Want To Return Home »