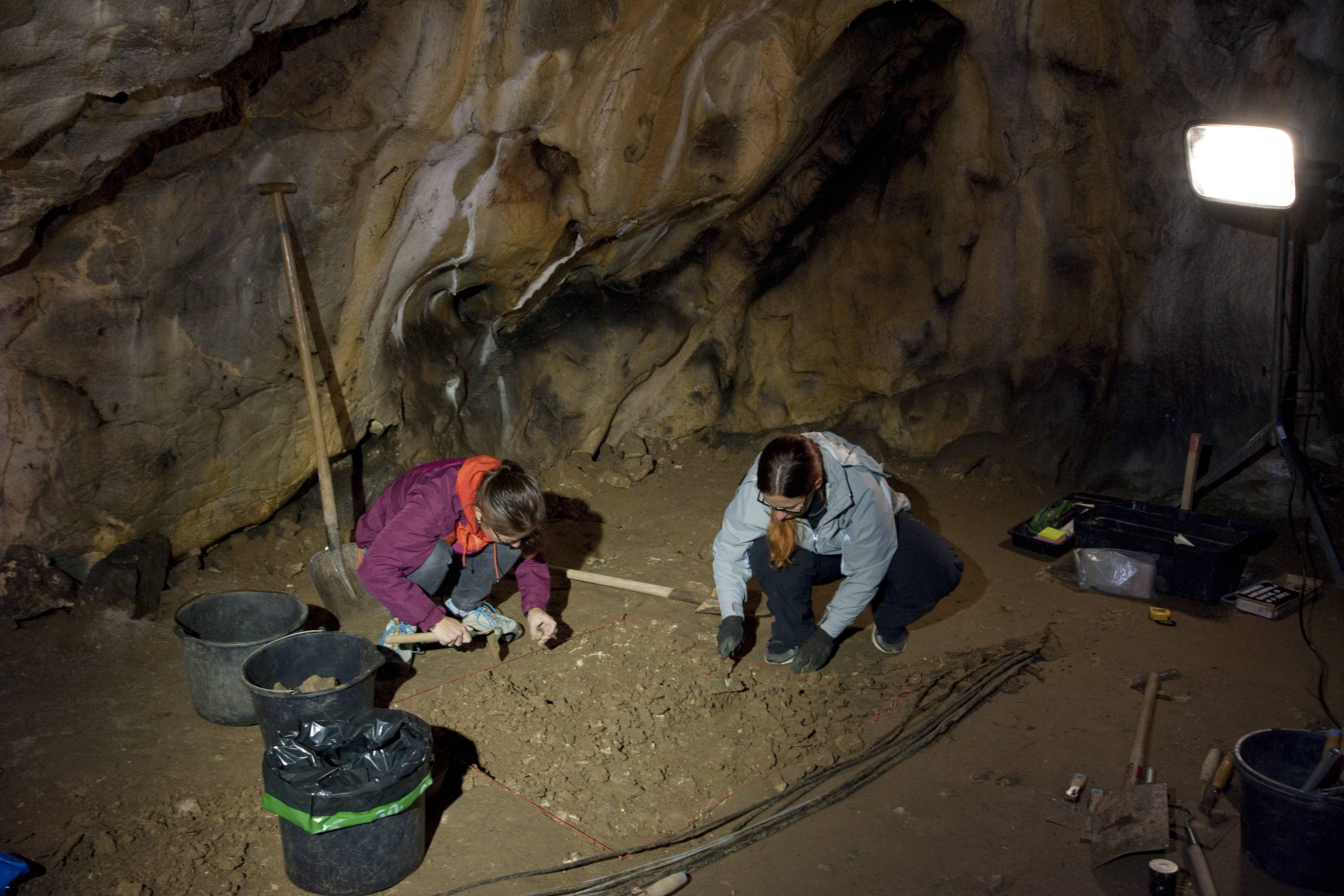 Brno, Aug. 16, (BD) – Kateřina Cave is an important palaeontological and archaeological site in Moravsky Karst, located in the deep canyon of Suchý žleb, near the Skalní mlýn information centre. After several years of epigraphic research in the cave, which revealed the oldest cave drawings in the Czech Republic, the first archaeological excavation inside the cave took place from 8 to 12 August 2022.

Prehistoric and mediaeval pottery shards were found during the excavations. “The prehistoric ones belong to the Bronze Age and are younger than the dated Neolithic rock drawings. However, a much bigger surprise was the discovery of a large number of coin blanks, so-called ‘sherds’, which have no minting and many are damaged in various ways. Scrap metal from the manufacturer also abounded. This discovery proves that there was a secret coin-making workshop on the premises of the Kateřina Cave in the Middle Ages, at the end of the 14th or during the 15th century,’ said Petr Zajíček of the Czech Cave Administration.

“The discovery in such a cave is the first in Moravia and the second in the Czech Republic. The Pennesozoo cave workshop was only known in the Koněpruské caves in the Bohemian Karst. It should be remarked that in the Middle Ages, penance-taking were considered capital crimes and the perpetrators were condemned to brutal torture and the death penalty,’ Zajíček adds. The research was conducted by the Czech Cave Administration, Palacký University in Olomouc (under the direction of Martin Golc) and Charles University in Prague. The results and findings of the research will be compiled and gradually published in professional and popular media.

Kateřina Cave is an archaeological site that has been open to the public and electrically illuminated since 1910. Its path covers a total length of 950 metres, and the one for visitors is a 580-metre-long track. Here, it is possible to see the famous Bamboo Forest with stick stalagmites several metres high or the formation of the Witch, whose emblem is depicted inside the cave. The main dome, 95 metres long and 44 metres wide, is the largest underground space in the Moravian Karst open to the public.

More information about Katerina Cave is available at the cave system’s website.

https://brnodaily.cz/2022/08/16/brno/secret-mediaeval-coin-workshop-discovered-deep-in-moravsky-karst-cave-system/https://brnodaily.cz/wp-content/uploads/2022/08/KAJ_zahajeni_praci_v_-Ledove_chodbe_PZ-1024x683.jpghttps://brnodaily.cz/wp-content/uploads/2022/08/KAJ_zahajeni_praci_v_-Ledove_chodbe_PZ-150x100.jpg2022-08-16T14:43:04+02:00Ilaria BriziBrnoArchaeology,Brno,Kateřina CaveTwo archaeologists examine the artefacts found in the Kateřina Cave (Kateřinské jeskyni). Photo credit: Petr Zajíček / SJ CR Brno, Aug. 16, (BD) - Kateřina Cave is an important palaeontological and archaeological site in Moravsky Karst, located in the deep canyon of Suchý žleb, near the Skalní mlýn information centre....Ilaria Brizi ilabrizi12@gmail.comAuthorItalian girl with a master’s degree in marketing and advertising. I love travelling, reading, writing, listening to music, but most of all I love having breakfast. Against cheese on tuna pasta.Brno Daily

Italian girl with a master’s degree in marketing and advertising. I love travelling, reading, writing, listening to music, but most of all I love having breakfast. Against cheese on tuna pasta.
View all posts by Ilaria Brizi →
« SAKO Brno Presents First Electric Garbage Truck In The Czech Republic
13 Brno Clubs Combine Forces For Biggest Club Night Ever In Brno »