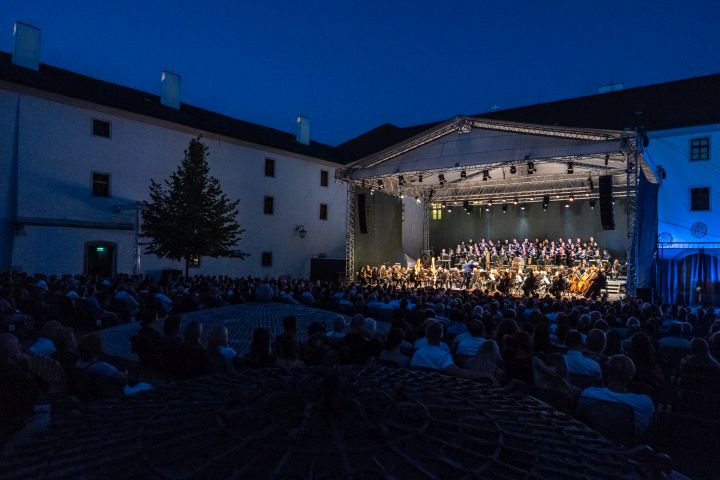 Brno, Aug. 15 (BD) — Filharmonie Brno will kick off the 23rd Špilberk International Music Festival this week. There will be four large concerts in the castle courtyard over the next 10 days.

“We are sticking to the tried and tested model in order to show classical music to those who do not normally attend concerts,” said Marie Kučerová, director of the Filharmonie Brno.

The festival has already proven to be popular: two of the performances are sold out.

TONIGHT — The opening concert will present Romantic-period compositions from Mendelssohn, Stravinsky, and Tchaikovsky.

French cellist Camille Thomas, an international star, will be accompanied by the Prague Philharmonia (PKF). She will perform Bruch’s Kol Nideri, inspired by the melodies of Jewish songs, and David Popper’s Hungarian Rhapsody. The concert will be conducted by Alvetina Ioffe, the music director of the Mikhailovsky Theatre in St. Petersburg and the first woman to lead such a major institution in her country.

WEDNESDAY ­— Film music will fill the night sky when the Czech National Symphony Orchestra performs the greatest hits of John Williams, including well-known compositions such as the themes from Star Wars, Jaws, Harry Potter, Jurassic Park, Indiana Jones, and Schindler’s List. As of last week, there were only standing-room tickets available.

THURSDAY — Brno art-rock legend Roman Dragoun will lead an unusual arrangement with the B-Side Band, the Czech Ensemble Baroque Choir, and members of Filharmonie Brno. It will bring together artists from different genres to produce thought-provoking music.

THURSDAY, AUG 25 — The final evening of the festival is a week later, putting Filharmonie Brno and its chief conductor, Dennis Russell Davies, on stage. The orchestra will play Dvořák’s Symphony No. 9 “From the New World”, Leoš Janáček’s Jealousy, and Erich Wolfgang Korngold’s Violin Concerto in D major. This concert is sold out.

Korngold dedicated his composition to his teacher’s wife, Alma Mahler. “This Brno native became famous overseas as a composer of film music, for which he won two Oscars in the 1930s,” Kučerová noted.

Tickets for the festival are available at the Philharmonic’s advance sale or on the event website.

All concerts start at 8 p.m.

For those with reduced mobility, a shuttle bus service starts an hour before all of the concerts at the park on Husova (opposite the International Hotel).

A connoisseur of the unpredictable and unscripted drama of sports.
View all posts by Bruno Zalubil →
« Brno Institutions Collaborate To Develop Centre for Artificial Intelligence In Oncology
Škoda’s Profits Drop By One Third In First Six Months of 2022 »