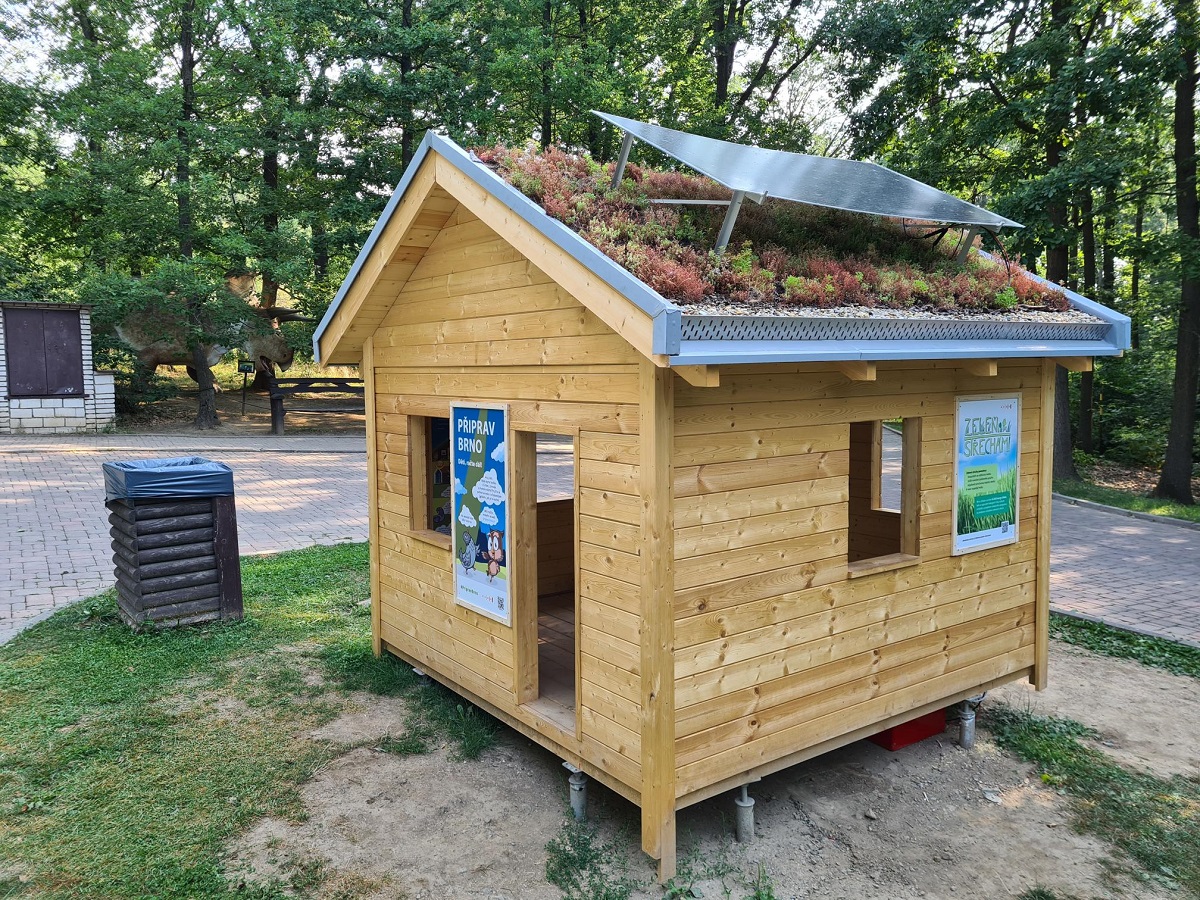 The wooden houses, like this one at Brno Zoo, are designed to educate and inform about climate change resilience in a playful way. Photo credit: MMB.

Brno, 11 Aug. (BD) – The effects of climate change on our planet will become increasingly felt by the next generations. It is therefore necessary to talk about the crisis not only with adults, but also children. Wooden houses with green roofs fitted with photovoltaic panels are being installed for this purpose at the Brno Zoo and the Llama Centre in Hády. Councillors approved a donation agreement today, meaning the houses will become the property of the city.

Brno has committed to reducing CO2 emissions and increasing its resilience against the local impacts of climate change, such as chronic drought, extreme cold, heatwaves, and torrential rains. As part of this, the city has launched the Prepare Brno challenge, which targets citizens as well as companies and institutions. City authorities have themselves implemented or are planning to implement a number of measures, including the construction of a municipal solar power plant, subsidies for the “Šalinkarta”, the replacement of public lighting with energy-saving LED sources, and of outdated steam pipes with modern hot water pipes.

“The city wants to promote the issue of adaptation to climate change as much as possible,” said Brno Mayor Markéta Vaňková (ODS). “One way is by installing wooden houses, which serve as a toy as well as an illustrative example of what ordinary living in the future could look like. They are equipped with green vegetation roofs made of limestone carpet, and also a small functional photovoltaic power plant with battery storage. The first house has been at Riviera since last year, and two more have been at Brno Zoo and the Hády Llama Centre since June of this year.”

According to 1st Deputy Mayor Petr Hladík (KDU-CSL), educational materials related to city projects, the Sustainable Energy and Climate Action Plan (SECAP) and the environmental education program for schools are installed in the houses. The rooftop solar panels could eventually power electrical devices inside, such as a sound metre proposed for the zoo, and a thermometer at Hády. “In a playful way, the houses inform people about the city’s goals in the expansion of green roofs and the Green Roofs subsidy program, including the retention of rainwater and the development of the use of renewable energy sources,” said Hladík. “They allow children and parents to test the functionality of these measures in practice.”

The foundations were built by the municipal company SAKO Brno, and the project activity was managed by the Brno Technical University, which also built the houses. For the construction, the Brno Forests Company provided lumber, including its preparation, in the form of a sponsorship gift worth CZK 103,000. Construction costs totalled CZK 238,000.

The owner of the eco-houses is SAKO Brno, which is donating them to the city of Brno; the contract was approved by Brno City Council today. The purpose of the donation is the future use of the houses, for example transferring or lending them to the Brno Zoo or the llama centre management company for more efficient management and maintenance.

https://brnodaily.cz/2022/08/11/brno/new-eco-houses-installed-at-hady-llama-centre-and-brno-zoo/https://brnodaily.cz/wp-content/uploads/2022/08/220810_32_ekodomecky_zoo-credit-MMB-1024x768.jpghttps://brnodaily.cz/wp-content/uploads/2022/08/220810_32_ekodomecky_zoo-credit-MMB-150x113.jpg2022-08-11T16:36:18+02:00Jack StephensBrnoNewsBrno,Brno Zoo,Education,Energy,EnvironmentThe wooden houses, like this one at Brno Zoo, are designed to educate and inform about climate change resilience in a playful way. Photo credit: MMB. Brno, 11 Aug. (BD) - The effects of climate change on our planet will become increasingly felt by the next generations. It is therefore...Jack Stephens jack.stephens50@gmail.comAuthorA writer and English teacher originally from London who has lived in Brno since 2011, interested in politics, low culture, and all things strange and/or Czech.Brno Daily

A writer and English teacher originally from London who has lived in Brno since 2011, interested in politics, low culture, and all things strange and/or Czech.
View all posts by Jack Stephens →
« Czech Senate Approves Finland and Sweden’s NATO Accession By Large Majority
Children of Antifascists Call On Babis To Resign From Public Posts Over Comments »