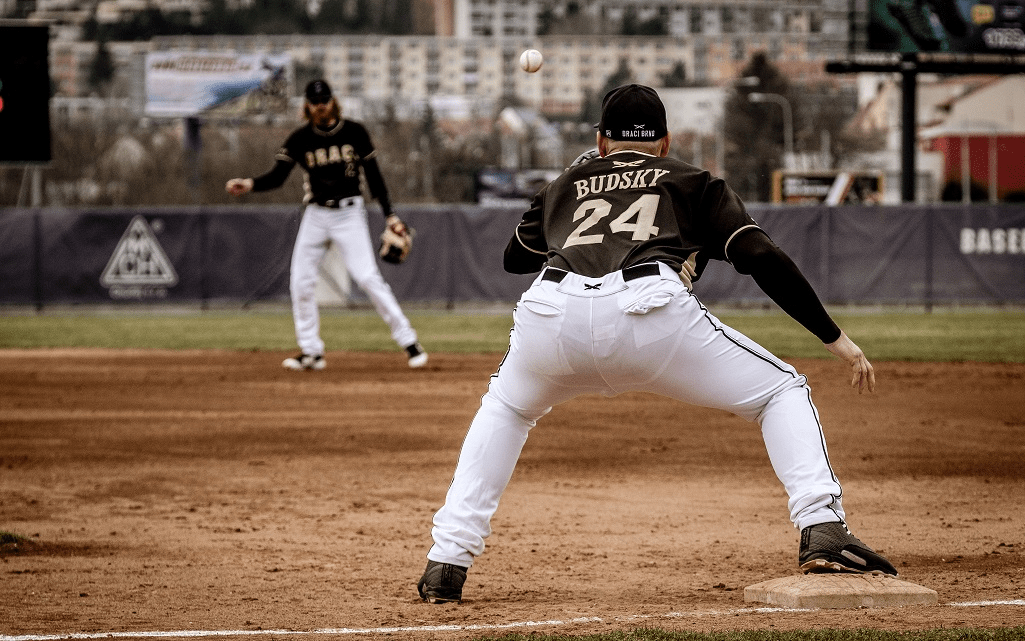 Brno Draci are back in the Czech Series, and so is 48-year-old Hall of Famer Pavel Budský. Photo credit: Baseball.cz

Brno, Aug. 10 (BD) — After catching fire in the heat of the summer, Cardion Hroši Brno have reached the finals of the Czech Baseball Extraliga to play cross-town rivals Draci Brno.

It is the first time in 11 years that two Brno teams will face off for the national title.

Game 1 will be hosted by Draci Brno this Friday in South Brno. First pitch is at 7pm.

The Draci, who are celebrating their 50th year of baseball, have won 21 titles. They topped the standings in the regular season and the Top Six part of the season. They needed five games to beat Eagles Praha to return to their normal place in the Czech Series.

The Hroši are newcomers. They have a shorter history and less success, generally finishing in the middle of the standings over the past several seasons. This summer, after finishing with an 11-10 record during the regular season, they caught fire in the Top Six part of the season to finish with a record of 10-5, just a game behind the Draci (11-4). Then they won their semifinal series 3 games to 1 against Tempo Praha.

Pitching was a major difference. The Hroši dropped a half run off of their team ERA after the regular season. In the semifinals, Lukáš Ercoli won twice, including the clinching game. Tomáš Ondra and Boris Večerka also made significant contributions.

The Draci, always a strong all-around team, also shaved a bit off of their ERA. A lot of their success, however, has been at the plate, where they have maintained a team batting average of over .300 for the entire season.

One of the big surprises of the early football season is that recently-promoted FC Zbrojovka provided a strong showing against two of their Moravian rivals to start their return in the Fortuna Liga. In Game 1 on 30 July, Brno shocked 1.FC Slovacko by holding on for a 2-2 tie. Last Saturday, Zbrojovka travelled to play the well-regarded Olomouc team and won, 2-0.

Zbrojovka takes to field again this Saturday when they host Mladá Boleslav at 4pm. Tickets are still available.

Liberec is the only team to have won both of its games through two weeks of the season. Bohemians, Plzeň, and Slovacko also have four points after having notched a win and a tie. Defending champions Slavia are 1-0-1 after opening the season with a loss to FC Hradec Králové.

Zbrojovka blitzed through the Fortuna:Národní Liga last year. They finished at the top of the standings with 69 points, 16 points ahead of the second-place team, to earn promotion.

The team, which is still coached by former player Richard Dostálek, dropped several older players, retained much of its team from the successful promotion squad, and added a few experienced older players. Midfielder Michal Ševčík, who turns 20 on Saturday, scored and had an assist in Olomouc. Grizzled scoring veteran Jakub Řezníček, who led the second league in scoring last year, also scored in Olomouc. Goalkeeper Martin Berkovec continued to serve as a competent backstop for the defense, which has been playing over its head and contributing mightily to the team’s early success.

Wale Musa Alli, a 21-year-old Nigerian, brought a welcome jolt of energy at the end of the Olomouc game; his quickness is such that, at times, his own teammates, let alone the defenders, have trouble keeping up.

For updated information and the schedule for the Fortuna Liga, go to the league website at https://www.fortunaliga.cz/.

If you live in a Czech city that is crazy about hockey — and which city is not? — then a good time to experience games with children is during the pre-season, which started this week.

The atmosphere still has beating drums and rabid fans in their designated areas (because everyone has to get into regular-season form) and it is much easier (and cheaper) to get good tickets. Plus the beer lines are much shorter.

The actual league games start in the middle of September.

https://brnodaily.cz/2022/08/10/sport/sport-round-up-brno-teams-face-off-in-czech-baseball-series/https://brnodaily.cz/wp-content/uploads/2022/08/Draci100822.pnghttps://brnodaily.cz/wp-content/uploads/2022/08/Draci100822-150x94.png2022-08-10T12:08:33+02:00Bruno ZalubilSportBaseball,Brno,football,SportBrno Draci are back in the Czech Series, and so is 48-year-old Hall of Famer Pavel Budský. Photo credit: Baseball.cz Brno, Aug. 10 (BD) — After catching fire in the heat of the summer, Cardion Hroši Brno have reached the finals of the Czech Baseball Extraliga to play cross-town rivals...Bruno ZalubilBruno Zalubilbzalubil@hotmail.comAuthorA connoisseur of the unpredictable and unscripted drama of sports.Brno Daily

A connoisseur of the unpredictable and unscripted drama of sports.
View all posts by Bruno Zalubil →
« Brno Day Returns To Commemorate The City’s Key Historical Events From 12-14 August
Brno National Theatre Hosts “Summer With Opera” In Spilberk Castle and Mikulov Amphitheatre »