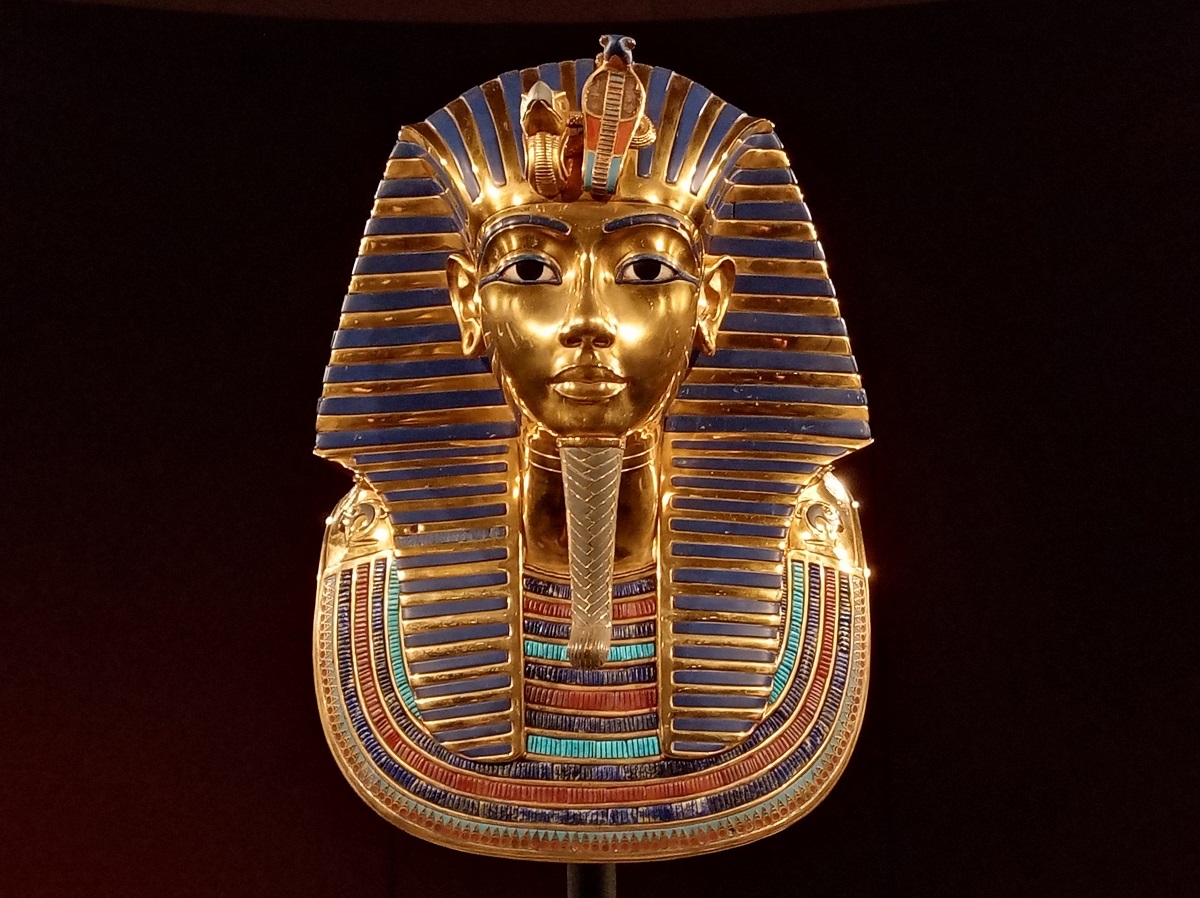 Tutunkhamun’s famous death mask is the centrepiece of the exhibition, which will now run until the end of 2022. Photo credit: Cathy Khoury-Prinsloo.

Visitors to the Tutankhamun Exhibition at Brno Exhibition Centre will echo these words.

The exhibition uses carefully, and beautifully crafted replicas. They are positioned as closely as possible to the original arrangement that Carter and his sponsor Lord Carnarvon saw when they opened the tomb for the first time, exactly 100 years ago. Excavation photographs and diagrams have provided accurate frames of reference.

The exhibition allows us to walk in their footsteps, and to see the outer burial chamber first, filled with elegant, animal-shaped gold seats, furniture, parts of chariots, and even containers which held food – everything the ancient Egyptians felt the king would need on his final journey.

We then tour the treasury, and finally the inner burial chamber.

It is a bedazzling show. There are so many glinting gold surfaces, and over 1000 beautiful objects to wonder at. From shrines, coffins, sculptures and wall paintings, to chariots, furniture, headrests, weapons, shields, model ships, jewellery and amulets.

Visitors may find they need to focus on some favourites, as this panoramic display really requires more than one visit to absorb fully.

In terms of sheer spectacle the four gold-panelled shrines are monumental. There is so much detailed imagery and hieroglyphics on the walls that the viewer cannot take it all in. Fortunately photographs are allowed (without flash), so you can re-examine the details and the information boards later.

In order for visitors to view the replicas of the shrines, the organisers had to arrange them in a line. However, originally in the tomb, they were nested one inside each other, with the stone sarcophagus housing the most precious items of all – the king’s coffins.

There is an outer gilded coffin, a middle coffin with elaborate and delicate cloisonné work of gold set with gemstones, and an inner coffin of pure gold weighing 110.4kg.

The inner coffin is elaborately patterned and decorated, with finely etched winged figures, and contains the famous death mask, positioned over the mummified head of the king. These are wonderful copies of exceptional, precious, breathtaking works of art.

By the end of the exhibition, however, it is a few small, comparatively humble objects which possibly evoke the visitors’ deepest emotional, even empathetic response. They give us a very human insight into this fabulously rich, revered but ultimately tragic king.

In startling contrast to the multiple gold nested shrines and coffins of the king himself, in the same tomb lay two small coffins simply wrapped in linen. Within these coffins were inner coffins containing a five month old foetus, and a newly born little girl – Tutankhamun’s children. Their deaths meant the end of the family dynasty.

Another miniature coffin, also containing an inner coffin of wood, has Tutankhamun’s paternal grandmother’s name, Tiye, inscribed on it, and contains a plaited lock of her hair. It evokes the great love of the king for his grandmother, that he wanted a tangible piece of her to accompany him on his final journey.

It also makes us realise how very young Tutankhamun was when he died – only about 18 years old.

By including this memento of his babička in his final resting place, Tutankhamun has ensured that she shares a kind of immortality with him. She is intricately connected with the story of the tomb. With future DNA testing of her hair she will also provide more information about this family.

Other modern technology has provided new visual information about Tutankhamun’s appearance to compare with his exquisite, stylised gold death mask.

The mask is an unforgettably iconic image. On the headdress gold alternates with blue – the colour of life, the sky and the Nile. Above the forehead it features small figures of a vulture and a serpent, symbolising Upper and Lower Egypt. The king’s expressive kohl-rimmed eyes are beguiling. He wears a multi-strand necklace, in favoured colours of royal blue, turquoise and red.

In 2005 a CT scan of his skull produced a very human, photographic-like portrait. It reveals that Tutankhamun was a handsome young man. He had prominent cheekbones, a long, straight nose, sensual lips and long ears – thought by some to indicate intelligence. In comparison, although stylised, the death mask seems to have captured his key features accurately.

There is some mystery about the cause of his death. He may have suffered an injury to one leg which did not heal. Forensic tests show he contracted malaria at some stage. The separation of his ribs may indicate a chariot accident involving being run over by a wheel. A small splintering of the skull possibly indicates a blow to the head. He may have been murdered.

Skullduggery was definitely committed by the reactionary people who came to power after Tutankhamun. His father, Akhenaton, introduced a revolutionary view of religion which offended these reactionaries, who then tried to wipe out all traces of his father’s reign. Despite Tutankhamun trying to appease them during his life, by returning to some traditional thinking, they also tried to obliterate him from historical records and art.

They did not succeed.

They removed all mention of Tutankhamun’s name from the front of an impressive statue which the king had made of himself, and which was found at the Temple of Amun. However, they failed to realise that the statue had a panel with his name clearly stated on it at the back. Possibly this was because the statue was positioned up against a wall, and the back was hidden.

Ironically today, through the discovery of his tomb, Tutankhamun is the most famous of all the Egyptian kings. He was a young ruler living in ancient times, in a distant country, who faced many of the challenges, political upheavals and intrigues of a modern day king or president.

Perhaps the most valuable treasures of all are the glimpses we get of the man behind the pharoah’s mask. The exhibition, however, cannot solve all the mysteries of his life or death.

Recently an Egyptologist discovered that the large stone sarcophagus had some engravings removed from it. He also found out that the wings of the corner figures were added much later than the rest of the carvings. The lid of the sarcophagus is of a different material to the base. We still do not know the full story of the construction of this sarcophagus, and that’s intriguing and puzzling.

The exhibition highlights that Carter’s life is a masterclass of puzzle solving and marathon perseverance. With the help of Carnarvon’s funding, and 100 workmen, he initially spent five fruitless years in the desert searching the Valley of the Kings for the tomb of the missing king.

In desperation, when Carnarvon was going to withdraw his funding as a result of a financial crisis, Carter begged him for one more chance, and retraced his steps, to some rough builders’ stone structures below the tomb of Rameses VI, where he finally found a walled up entrance with a seal on it, bearing Tutankhamun’s name.

The outer burial chamber was briefly disturbed but not emptied by robbers. Carter beat them to finding the walled up inner burial chamber. Carter realised that 2 life-sized statues facing each other appeared to be guarding the wall behind them, and he broke a small hole in this wall to investigate. The intact 3,300 year old inner burial chamber Carter discovered has contributed an unparalleled, and ongoing wealth of information about this ancient Egyptian dynasty.

The Tutankhamun exhibition provides great family edutainment. There is an interactive game for the young children to play including “a stamping of secrets” to help them focus on certain key features. There are also worksheets for older children. Audio tapes in Czech or English provide more information about the exhibits.

It has recently been announced that the exhibition will be extended until the end of 2022, so you have plenty of time to get to the exhibition and discover the mysteries of the young king’s life for yourself.

« Brno Safety Perceptions Study: 42% of Brno Residents Have Witnessed A Crime
Down My Street: Smetanova (Part 1) »