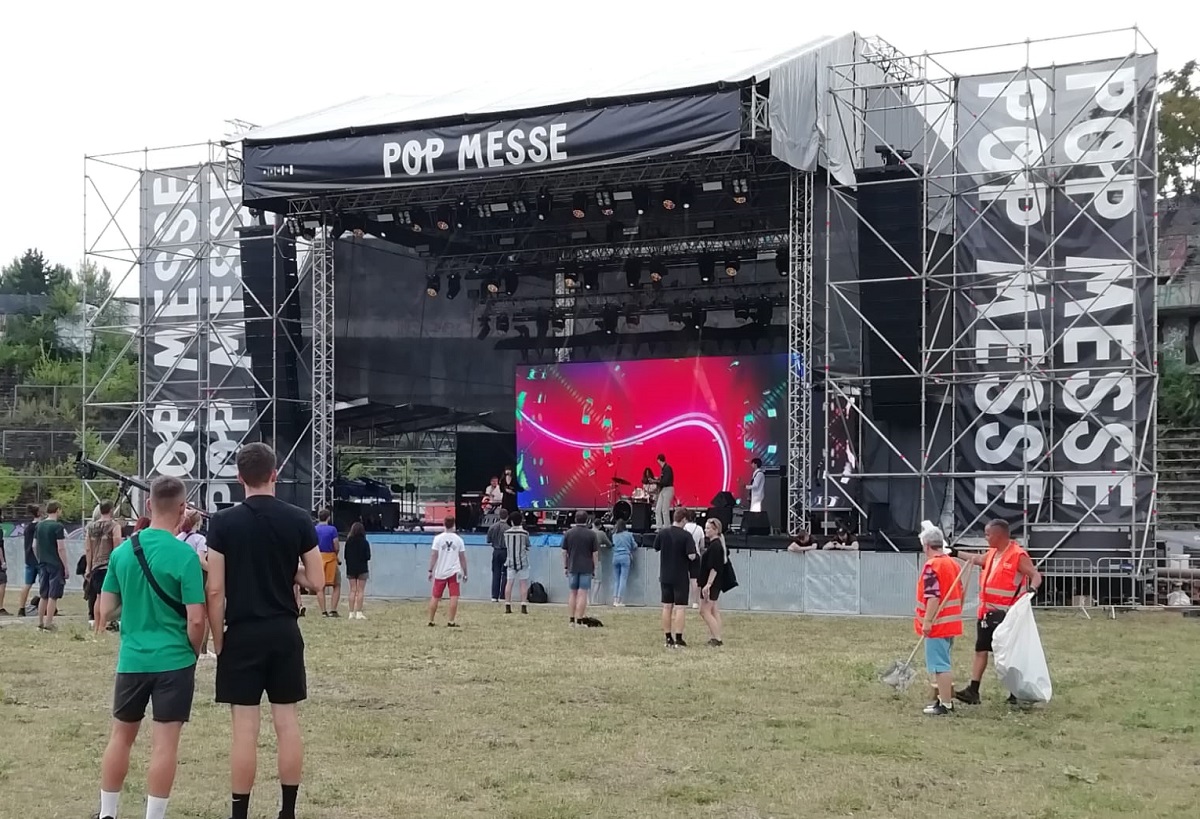 The Pop Messe festival returned to Brno this weekend for the second year running. Expanding beyond its existing setting of the Za Lužánkami stadium, this year’s festival boasted increased capacity, spreading to five stages from last year’s two, to occupy the oddly-named “Zoner Bobyhall” nextdoor. Alongside the feast of new and underground music on offer, the big names at the top of the bill, most obviously UK grime heavyweight Skepta, were further indications of a much higher level of ambition – and resources – from the organisers. Heavily supported by the City of Brno, this event is clearly on something of a mission to raise Brno’s profile in the Czech festival scene.

The formula seems to have worked; over 8,000 people attended this year’s event, and most of the festival-goers who spoke to Brno Daily were from out of town, citing either Skepta or Belfast’s electronic wizards Bicep as the main draw. It was not just the big names that shone this weekend in place of the timid sun, however; program director Tomáš Kelar, formerly of Kabinet Muz, managed to put together a rich, wide-ranging schedule of innovative acts to provide a superb weekend of music.

The headliners led from the front of what was a distinctly London-heavy line-up. The  beloved veteran of the London grime scene, Skepta closed the main stage on Friday in strident form, though the crowd was larger and probably more responsive for the previous set by Bicep, who create ornate electronic soundscapes variously laid over soulful house or slamming techno. The duo’s famous close attention to the technical side of the craft was clearly evident; the sound quality spoke for itself, and the mesmerising light show received repeated purrs of approval from the 2,000-ish crowd as they were periodically bathed in lasers.

The British contingent was represented on Saturday by West London’s Alewya, whose energy and dancehall-flavoured set got the crowd jumping, despite appearing early in the day on the second stage, and could easily have fitted into the program much later. The Brits saved their best for last, however, with performance poet Kae Tempest, the unofficial voice of the UK’s disillusioned youth, who headlined the main stage on Saturday with an intensely powerful hour of lyrical truthbombs, hard, tough, and urban-depressive, yet simultaneously confessional, comforting, and cathartic. For a performer to reach this level of intimate connection with a crowd of thousands is not an ordinary feat, yet everyone we spoke to after the set had the same feeling of watching something special, unforgettable, and the best kind of emotionally exhausting.

And all the more so, given that this set came almost immediately after the weekend’s other highlight, Shortparis. As festival directors of all genres around Europe grapple with the supposed dilemma of whether to excommunicate Russian artists from line-ups, Pop Messe provided an extremely clear argument for the folly of this approach, as the St Petersburg industrial art-punk collective and their compatriots IC3PEAK brought two of the most interesting, uncompromising, and downright original offerings of the weekend. Shortparis combined sinister stage theatrics and shamanic chanting with the confrontational industrial nihilism of 1980s West Berlin to create a sound and visual performance that felt truly of its time – social and political uncertainty with manic banging beats. Meanwhile, in their Friday set, Gen-Z firebrands IC3PEAK exhibited the iconoclastic menace which has seen them long banned from playing in their homeland, a dystopian drill-punk nightmare in a format that recalls t.A.T.u. and Die Antwoord, but mashed up and rewritten by a futurist Brothers Grimm.

Neither of these bands could come from anywhere but Russia, and both of them have crucially important witness statements to make about the state of their country, and huge potential to contribute to the creative exchange of the international music scene. Cultural promoters in the rest of Europe should see their role as foregrounding these voices, allowing a public discourse to take place openly between Russian artists that is not permitted in Russia itself.

As a diverse showcase of artists making interesting, alternative music, the rest of the line-up also did not fail to please. Crowd-pleasing veteran Czech hip-hop collective Prago Union offered smooth and soulful funk-laden rhythms early on Friday; Ukrainian-born Brno-based rapper Michajlov provided a searing party set in the stadium on Saturday evening; and San Francisco’s Avalon Emerson closed the dance room on Friday night with her typically playful full-bodied melodic tech-house. Also worth mentioning was electro-indie outfit Nauzea Orchestra, of Usti-nad-Labem, who delivered an excellent show on Friday afternoon. With an Air-meets-Charta 77 stylistic presentation, complete with Havel-lookalike vocalist Ondřej Švandrlík, they channelled an unmistakably Czech blend of playful charm and understated melancholy. Bassist Ivo Mikšovský is Brno Daily’s nomination for best dressed man of the weekend: truly a man from another era of dapper.

The relatively expensive CZK 2,000 entry fee served somewhat to keep Pop Messe on the vaguely bougie end of the festival spectrum: music heads only. Although that will be of aggravation to those accustomed and attached to Brno’s normal inclusive cheap prices, this was no doubt a conscious decision, allowing for conceptual ambition, state-of-the-art sound tech, and more high-profile artists. In fact, in the end it was the consistent quality of the music that answered the price tag and the various other minor organisational criticisms; Brno seems to have established a cute little festival, with a world-class line-up, and here’s hoping it continues to grow in confidence and stature. It could be something great for the city.

https://brnodaily.cz/2022/08/03/culture/pop-messe-review-brno-an-ambitious-village/https://brnodaily.cz/wp-content/uploads/2022/08/pop-messe-featured-credit-laura-usai-BD-1024x699.jpeghttps://brnodaily.cz/wp-content/uploads/2022/08/pop-messe-featured-credit-laura-usai-BD-150x102.jpeg2022-08-03T09:48:45+02:00Jack StephensArt & CultureBrno,Culture,Festival,Music,Music Festival,Pop MesseThe second edition of the Pop Messe festival landed in Brno's Za Lužánkami stadium last weekend. Brno Daily was there to survey the scene... Photo credit: Laura Usai / BD. The Pop Messe festival returned to Brno this weekend for the second year running. Expanding beyond its existing...Jack Stephens jack.stephens50@gmail.comAuthorA writer and English teacher originally from London who has lived in Brno since 2011, interested in politics, low culture, and all things strange and/or Czech.Brno Daily

A writer and English teacher originally from London who has lived in Brno since 2011, interested in politics, low culture, and all things strange and/or Czech.
View all posts by Jack Stephens →
« Brno Architecture Days Festival Returns To Open The Doors To Otherwise Inaccessible Buildings
Two Adults and Two Children Die Following Violent Incident in Zlin Region »