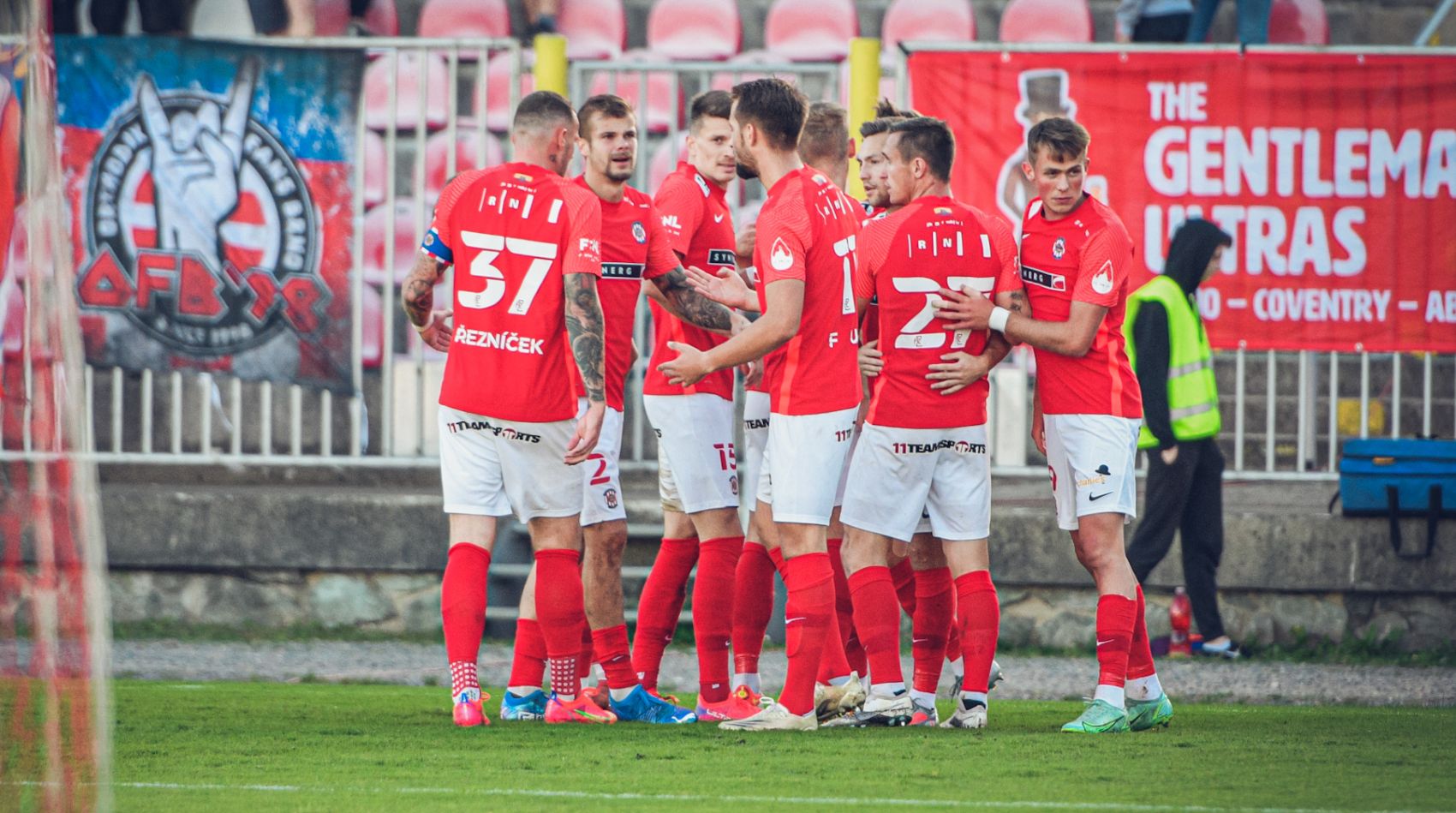 The club’s Fortuna Liga season starts at home against rival 1.FC Slovácko on Saturday, with top-scorer Jakub Řezníček (left) leading the team into their first match. Expect a large and lively crowd when the stands fill for the first top-flight game after a season in the second league. Photo credit: FC Zbrojovka Brno

Brno, July 28 (BD) — After spending last year in the second league of Czech football, football fans will celebrate this Saturday as FC Zbrojovka will again be counted among the top football teams of the country.

Brno will host rival 1.FC Slovacko in the opening day game of the Fortuna Liga. The game starts at 4pm at Srbska Stadium in Kralovo Pole, now known as the ADAX Invest arena. Tickets are still available.

Zbrojovka blitzed through the Fortuna:Národní Liga last year, finishing at the top of the standings with 69 points, 16 points ahead of the second-place team, to earn promotion.

The team, still coached by former player Richard Dostálek, has retained much of its team from the successful promotion squad, while dropping several older players, and adding a few experienced players.

Still here are the grizzled scoring veteran Jakub Řezníček and the young midfielder Michal Ševčík, and Jakub Přichystal is always a dangerous scoring threat. Forward Adam Fousek and goalkeeper Martin Berkovec, who was invaluable last season, both signed new contracts this summer to stay with the team.

New faces include Šimon Falta (a 29-year-old midfielder with national-team experience on a one-year loan from champions FC Viktoria Plzeň), Róbert Matejov, and Josef Divíšek (who just came from Slovacko). The quick-footed Wale Musa Alli is a 21-year-old Nigerian who has shown some impressive moves as he earned his spot with the team during pre-season. Ondřej Pachlopník, who has many moves of his own, is back from an inconsequential loan to Plzeň.

1.FC Slovácko, based in Uherske Hradiste, are a traditional rival for Brno. They are currently a top team that has enjoyed a lot of success lately, including earning a berth in the Europa League. Last year, they won the MOL Cup, setting off region-wide celebrations.

Since 2004, Zbrojovka has had the upper hand in the rivalry, winning 14 and losing 8, with five draws. Many fans still remember the trouncing on 24 October 2010, when Brno beat Slovácko 7-0.

For updated information and the schedule for the Fortuna Liga, go to the league website, or the FC Zbrojovka team website (both in Czech).

https://brnodaily.cz/2022/07/28/sport/fc-zbrojovka-brno-return-to-top-czech-football-league-on-saturday/https://brnodaily.cz/wp-content/uploads/2022/07/Zbrojovka280722-1024x572.jpghttps://brnodaily.cz/wp-content/uploads/2022/07/Zbrojovka280722-150x84.jpg2022-08-04T16:26:23+02:00Bruno ZalubilBrnoSportBrno,FC Zbrojovka,football,SportThe club’s Fortuna Liga season starts at home against rival 1.FC Slovácko on Saturday, with top-scorer Jakub Řezníček (left) leading the team into their first match. Expect a large and lively crowd when the stands fill for the first top-flight game after a season in the second league. Photo...Bruno ZalubilBruno Zalubilbzalubil@hotmail.comAuthorA connoisseur of the unpredictable and unscripted drama of sports.Brno Daily

A connoisseur of the unpredictable and unscripted drama of sports.
View all posts by Bruno Zalubil →
« Vast Forest Fire Is Burning In České Švýcarsko National Park
EU Support For Ukraine Through European Peace Facility Increased To €2.5 Billion »