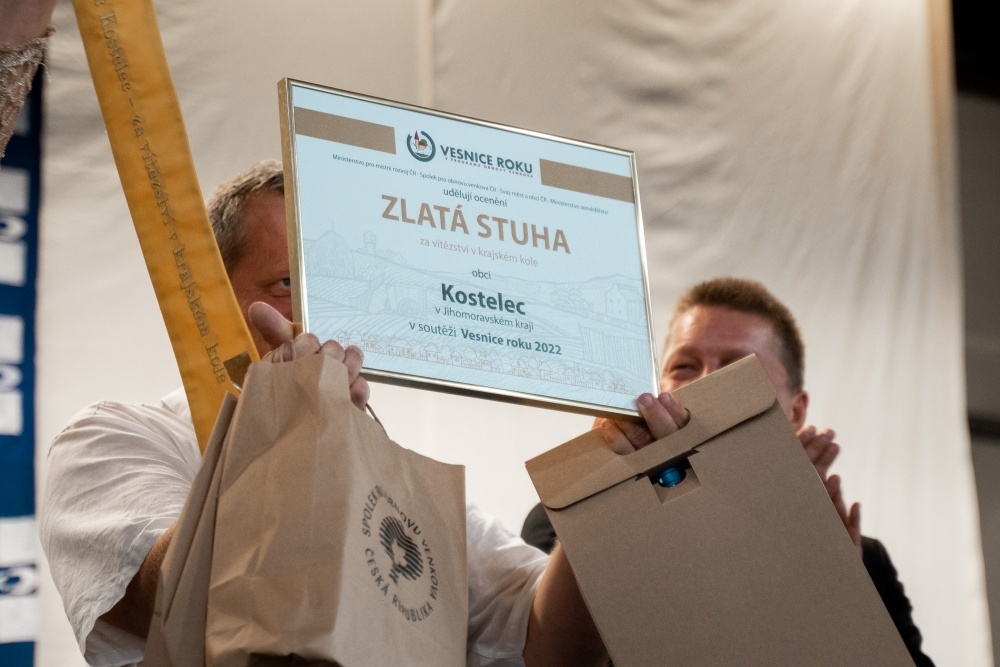 Kostelec in the Hodonín region has been named the South Moravian Village of the Year 2022 and will represent the region in the national finals of the competition. On Friday, 22 July, the village leaders received the Golden Ribbon from the Governor of the South Moravian Region, Jan Grolich, the Minister of Agriculture, Zdeněk Nekula, and the Deputy Minister of Regional Development, Radim Sršná, at a ceremony in Kostelec. Photo credit: JMK

Brno, July 25 (BD) – Kostelec, with 894 inhabitants, is located in the Hodonín district near the town of Kyjov in the foothills of the Chřiby Mountains, one hour drive from Brno. There are nine civic associations and clubs in the village. There is an original school café within the primary school where children offer refreshments to parents and other visitors. The parish uses the “Old Post Office” community center in partnership with the village.

“The Region has released CZK 1.4 million from its budget for the organisation of the competition,” said Grolich. “I am very happy that the largest ever number of municipalities from our region entered the competition – out of 175 competitors, 20 were from South Moravia. We have a lot of great municipalities here, and especially well run ones. Kostelec deserves first place. And I keep my fingers crossed for the national round, so that we can show that the most beautiful villages are in South Moravia.”

The Village of the Year competition has been running since 1995 and promotes countryside traditions and way of life. It draws attention to the importance of the countryside and also encourages citizens to participate in the development of their home villages. The competition is open to villages of a rural character (including those with the status of towns and townships) which have a maximum population of 7,500 inhabitants, and which have drawn up their own strategic document for the development of the village, a village renewal program or a development program for their territorial district. This year’s winner will be announced on 17 September at the Rural Fair in Luhačovice.

https://brnodaily.cz/2022/07/25/brno/kostelec-wins-title-of-south-moravian-village-of-2022/https://brnodaily.cz/wp-content/uploads/2022/07/Kostelec-village-of-the-year-credit-JMK.jpghttps://brnodaily.cz/wp-content/uploads/2022/07/Kostelec-village-of-the-year-credit-JMK-150x100.jpg2022-07-25T16:00:35+02:00Julie ChretienBrnoNewsBrno,Contest,Kostelec,News,South Moravia,VillageKostelec in the Hodonín region has been named the South Moravian Village of the Year 2022 and will represent the region in the national finals of the competition. On Friday, 22 July, the village leaders received the Golden Ribbon from the Governor of the South Moravian Region, Jan Grolich,...Julie Chretien julie.chretien29@gmail.comAuthorA 21 year-old French student currently doing a Master's degree in management and communication in Lyon, France. Always thrilled to learn about new cultures and languages, and also, big fan of foods. Loves cats and karaoke night with friends.Brno Daily

A 21 year-old French student currently doing a Master's degree in management and communication in Lyon, France. Always thrilled to learn about new cultures and languages, and also, big fan of foods. Loves cats and karaoke night with friends.
View all posts by Julie Chretien →
« EU Targets Additional 54 Individuals and 10 Entities In Response To Russian Invasion of Ukraine
Consumer Confidence In Czech Economy Falls To Lowest Level On Record »