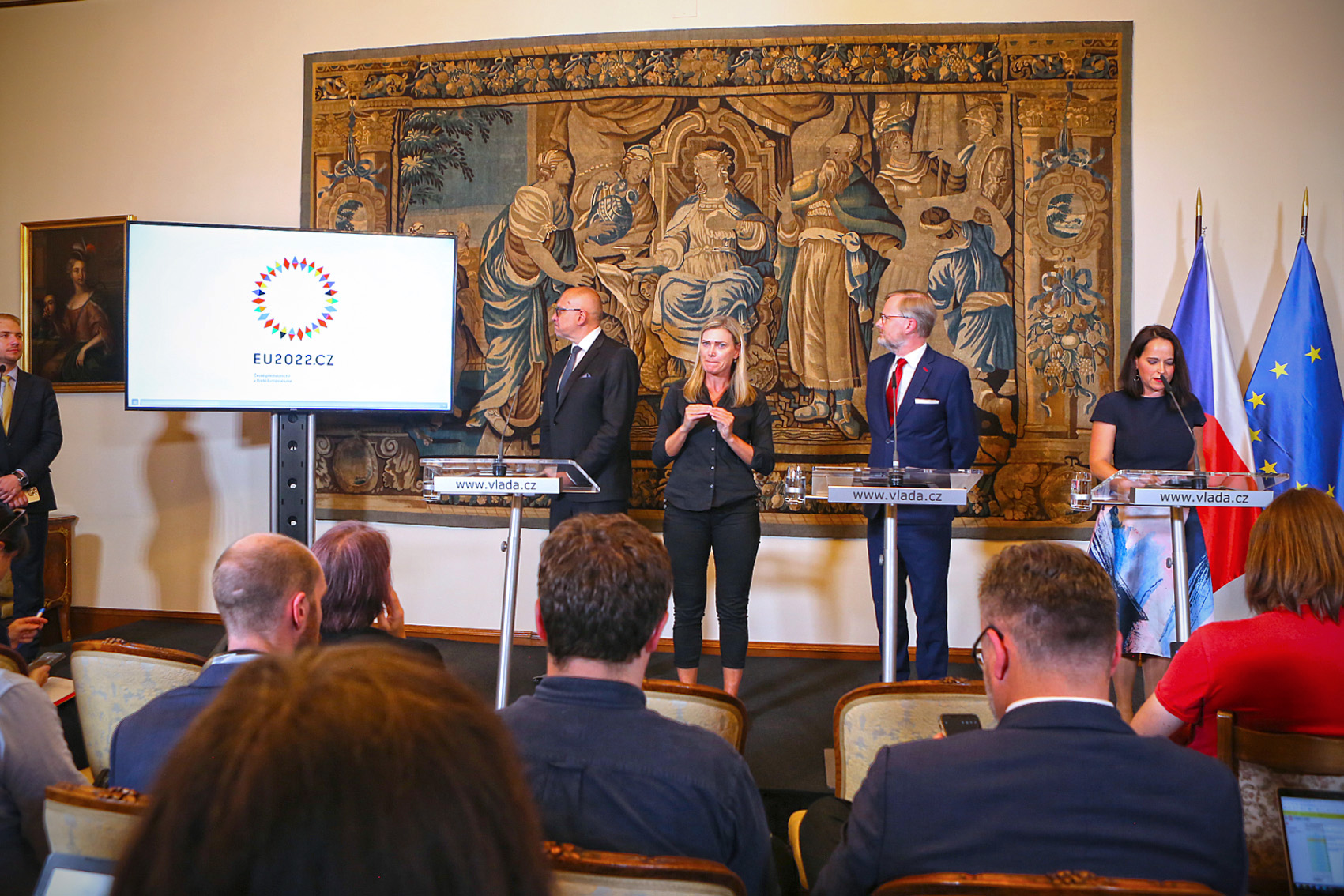 On Thursday, 16 June, Prime Minister Petr Fiala and other members of the Government held talks at the Liechtenstein Palace with a delegation from the European Parliament, led by its President Roberta Metsola. The main topic of the meeting was the upcoming Czech Presidency of the Council of the European Union and the key priorities they will focus on. Photo credit: vlada.cz

Czech Republic, June 20 (BD) – The meeting between members of the Czech Government and the President and other representatives of the European Parliament was the first event held under the auspices of the Czech Presidency of the Council of the EU (CZ PRES). This followed the presentation of the logo, motto and priorities of CZ PRES, which were presented the day before, on Wednesday, 15 June. The main purpose of the meeting was to discuss the priorities of the Czech Presidency, which begins in July.

During the six-month presidency, the Czech Republic will focus on five key priorities: managing the refugee crisis and post-war reconstruction in Ukraine, energy security, strengthening European defence capabilities and cyberspace security, strategic resilience of the European economy, and the resilience of democratic institutions.

“All these pillars reflect the long-term strategic interests and priorities of the Czech Republic,” said Fiala. “These are values that the Czech Republic has long stood for and is proud of, which are reflected in the priorities of our Presidency. Together with our European partners, we will strive during our six months at the helm of the European Union to be stronger together and to use our strength to the benefit of those who need it.”

Fiala also noted that this year marks 18 years since the Czech Republic joined the EU. “On the first of July, we will enter our historic second Presidency of the Council of the European Union. We can therefore say, with only a little exaggeration, that it will be a bit of a test of maturity, which will by no means be easy. Europe, and with it the whole world, is undergoing a fundamental change, because the Russian invasion of Ukraine has shaken many of our certainties. It has certainly exposed weaknesses in Europe’s security architecture, which we will have to take a new look at and, above all, develop actively, not just as observers relying on others,” he said.

Fiala also highlighted the huge wave of refugees triggered by the Russian invasion of Ukraine. “We must exert maximum effort and focus on Ukraine’s post-war reconstruction and help Ukraine on its path to the European Union,” he said. “But Russia’s aggression has also undermined the fundamental pillars of our economy – energy security, supply chains – at a time when we have literally only just started to breathe again after Covid-19. It is therefore our fundamental duty to ensure Europe’s strategic resilience in all these areas. Food security for citizens, for example, should remain a certainty. The availability of strategic materials and products, such as medicines and other items, should be a priority.”

Fiala said that the world would not be the same after the Russian invasion, bringing a challenge for leaders. “We want to play an active part in making it what it will be, because we have a unique chance and opportunity to write the future of Europe.” He added that in this context, “The task of the Czech Presidency will be, above all, to reach consensus and achieve European unity.”