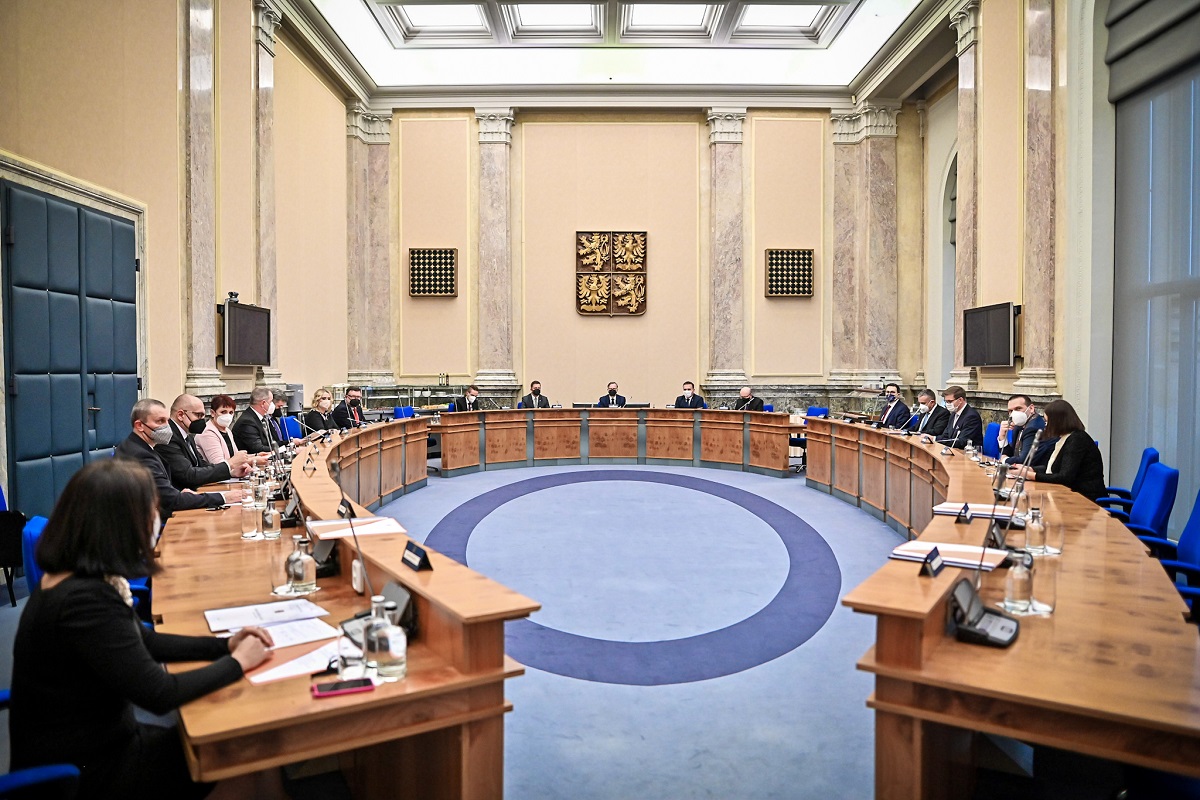 The government has approved a pension increase that will come into effect as early as September. A change in legislation to strengthen the state’s energy security was also discussed. Photo Credit: vlada.cz

Czech Republic, 27 May (BD) – Pensions in the Czech Republic will rise again from September, by 5.2%. The third increase in pensions this year was approved by the government of Petr Fiala at a meeting on Wednesday, 25 May. The government also discussed a draft amendment to the Energy Act to increase the Czech Republic’s energy security, and extended the state of emergency until 30 June.

The average old-age pension will increase by CZK 700 from September, at a cost to the state budget of CZK 7.8 billion. The total increase in the average pension will thus exceed CZK 2,500 this year. “The increase in pensions is necessary because of the rising prices and cost of living. Any pension recipient, whether elderly, disabled or other, is among the most vulnerable groups of people. The increase will help improve their quality of life and alleviate their condition due to restricted budgets,” said Minister of Labour and Social Affairs Marian Jurečka (KDU-CSL).

Concerning the rising prices, Jurečka also submitted a further proposal to the government for further assistance in the form of a one-off allowance for families. This would consist of CZK 500 for each child before the start of the school year. The government will discuss this proposal again next week.

The government also approved a draft amendment to the Energy Act, aiming to increase the capacity of gas storage facilities as soon as possible to strengthen the energy security and self-sufficiency of the Czech Republic. “We have taken energy security seriously and responsibly from the very first moment we took office as a government. We are trying to take all steps to ensure sufficient sustainable energy for Czech households, Czech citizens and Czech companies and to ensure that this energy is accessible,” said Fiala (ODS).

The amendment to the Energy Act is aimed primarily at the gas industry, and its main objective is to ensure sufficient gas reserves in the event of supply disruptions due to the Russian aggression in Ukraine. In the case of gas storage, the government proposes to introduce a “use it or lose it” principle, according to which gas traders who do not meet the required minimum quantities of gas within a specified time period will lose the right to use the reserved storage capacity. In this way, the government hopes to encourage efficient use of capacity in gas storage facilities.

“It is not a common practice, but we are in a situation where we cannot afford to have unfilled gas tanks on our territory,” continued Fiala. “Having them filled can be crucial in the event of a supply interruption or restriction. Gas storage facilities in the Czech Republic are able to hold one third of the annual gas consumption. As you know, we have taken a number of steps to make this happen, and at the moment they are more than 50% full. We will continue to do so, as this is something that contributes, at least in the short term, to the energy security of the Czech Republic.”

The government also adopted a resolution extending the state of emergency in the Czech Republic for another month until 30 June, with the prior consent of the Chamber of Deputies. The government said that the extension is necessary to have effective measures in place to deal with the refugee crisis.

The Council of Ministers also approved further humanitarian aid for Ukraine. The Regional State Archives in Prague will provide Ukraine with shelving and shelving systems to the value of CZK 1.74 million, to help Ukraine save valuable archival material from Russian invaders. The government also approved a financial donation of CZK 3.2 million from the Czech Interior Ministry’s Security Development Cooperation Program for the Ukrainian National Police. With this money the police can buy the protective equipment required to operate.

https://brnodaily.cz/2022/05/27/news/politics/government-increases-pensions-and-targets-energy-self-sufficiency-in-response-to-rising-prices/https://brnodaily.cz/wp-content/uploads/2021/12/first-meeting-of-fialas-cabinet-credit-vlada.cz_-1024x683.jpghttps://brnodaily.cz/wp-content/uploads/2021/12/first-meeting-of-fialas-cabinet-credit-vlada.cz_-150x100.jpg2022-05-27T11:25:12+02:00Ilaria BriziCzech Republic / WorldPoliticsCzech Republic,Energy,News,Pensions,PoliticsThe government has approved a pension increase that will come into effect as early as September. A change in legislation to strengthen the state's energy security was also discussed. Photo Credit: vlada.cz Czech Republic, 27 May (BD) - Pensions in the Czech Republic will rise again from September, by 5.2%....Ilaria Brizi ilabrizi12@gmail.comAuthorItalian girl with a master’s degree in marketing and advertising. I love travelling, reading, writing, listening to music, but most of all I love having breakfast. Against cheese on tuna pasta.Brno Daily

Italian girl with a master’s degree in marketing and advertising. I love travelling, reading, writing, listening to music, but most of all I love having breakfast. Against cheese on tuna pasta.
View all posts by Ilaria Brizi →
« New Beer Brewed To Commemorate Mendel, Founder Of Genetics
Brno Days of Health Campaign Returns With Educational and Healthy Activities For All Ages »