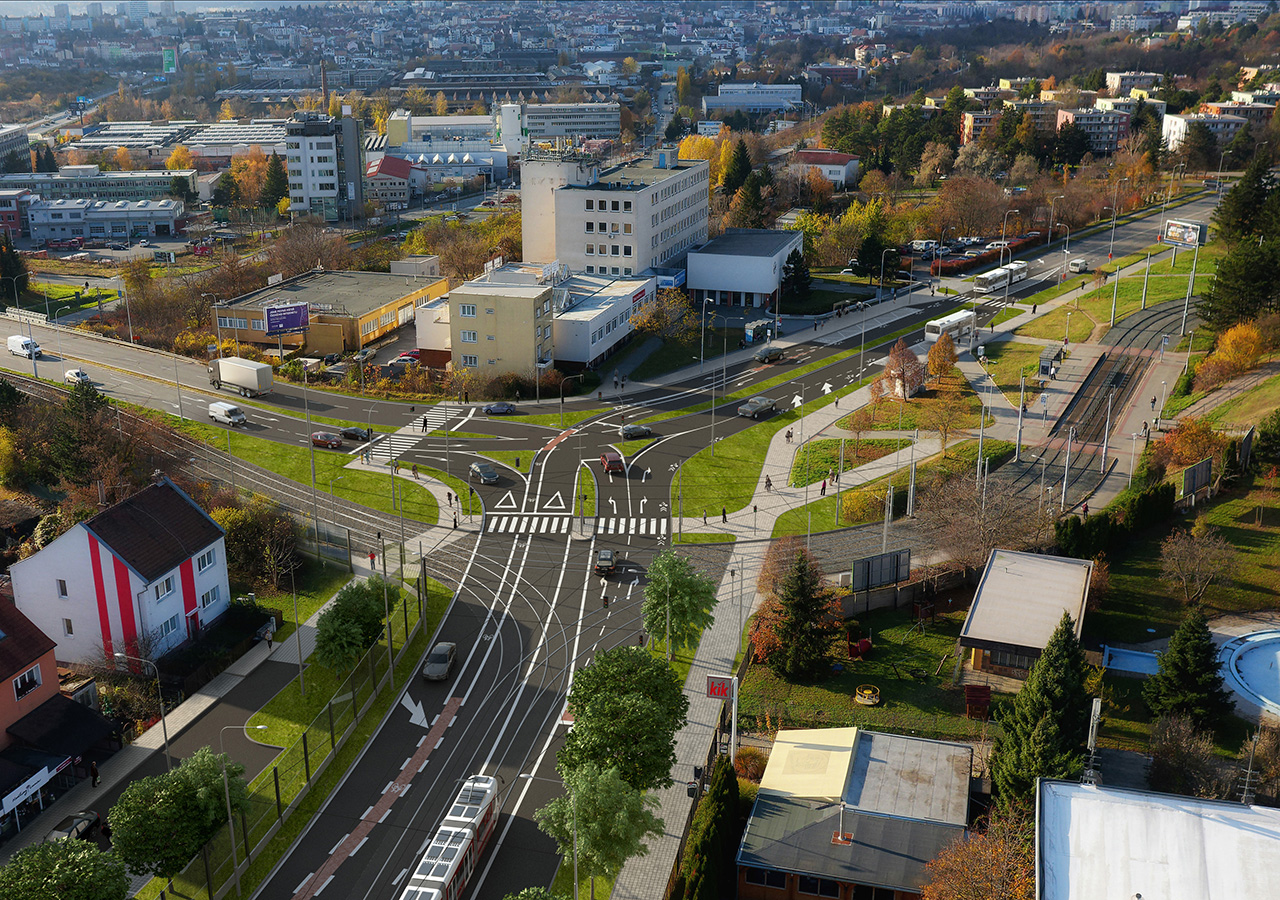 A new tram line extension to Lesná will provide faster and more convenient connections between the city centre and the north of the city. The route of the new tram line is already known, and now new visualisations by PK Ossendorf, s.r.o. show how the new line will look. Photo credit: PK Ossendorf, s. r. o

Brno, March 23 (BD) – “The extension of the tram from the Štefánikova čtvrt’ loop to Lesná has been in preparation for many years,” said Markéta Vaňková, Mayor of Brno. “Today we have made a major breakthrough. In addition to the project documentation for the construction permit, which is currently being prepared by the Brno Transport Company, we now know what the route will actually look like. The visualisations will undoubtedly help the residents of Lesná to imagine the future appearance of their surroundings.”

The plan for the future construction is divided into two phases, the first of which is scheduled to begin in 2023. It includes the reconstruction and rehabilitation of the bridge over the railway line on Merhautova, which is in a dilapidated state. The City of Brno and the South Moravian Region will be involved in the funding. The second stage will consist of the actual laying of the tracks to the junction with třída Generála Píky.

“The project also includes the total reconstruction of the street area,” added Petr Kratochvíl (ODS), Brno city councillor for transport. “This includes modification of roads, pavements, parking, protection of the surroundings from road noise and also revitalisation of the surrounding greenery. The intersection of Okružní and Seifertova, which is designed with a non-standard roundabout, will undergo major changes. Thanks to the reconstruction, the road will be clearer for drivers and cycle lanes will be created along the entire length of the newly repaired road. Everything is clearly indicated in the new visualisations. We expect the construction work to start next year.”

The project includes the creation of a new bus stop on Provazníkova. It will allow convenient transfer from the key trolleybus routes 25 and 26. The existing public transport stops at Štefánikova čtvrt’, Lesná nádraží, Poliklinika Lesná and Halasovo náměstí will also be improved.

Given the benefits of this construction for the City of Brno, the project will seek co-financing from EU sources under the Transport 3 Operational Programme. The project cost is currently provisionally estimated at CZK 800 million.

https://brnodaily.cz/2022/03/23/brno/new-visualisations-reveal-details-of-planned-tram-extension-to-lesna/https://brnodaily.cz/wp-content/uploads/2022/03/lesnaTT_viz_LET1_vizualizace_PK_Ossendorf__2_-1024x720.jpghttps://brnodaily.cz/wp-content/uploads/2022/03/lesnaTT_viz_LET1_vizualizace_PK_Ossendorf__2_-150x105.jpg2022-03-23T11:56:26+01:00Lou KaemoBrnoNewsBrno,News,Tram,TransportA new tram line extension to Lesná will provide faster and more convenient connections between the city centre and the north of the city. The route of the new tram line is already known, and now new visualisations by PK Ossendorf, s.r.o. show how the new line will look....Lou Kaemo loukaemobrno@gmail.comAuthorFrench intern, studying political sciences in Paris. Interested in media studies and journalism. Driven by curiosity, which pushed me to travel and always discover new things.Brno Daily

French intern, studying political sciences in Paris. Interested in media studies and journalism. Driven by curiosity, which pushed me to travel and always discover new things.
View all posts by Lou Kaemo →
« Self-Driving Minibus Begins Trial On The Streets of Brno
EU Tourism Recovered In 2021 After End of Pandemic Restrictions »