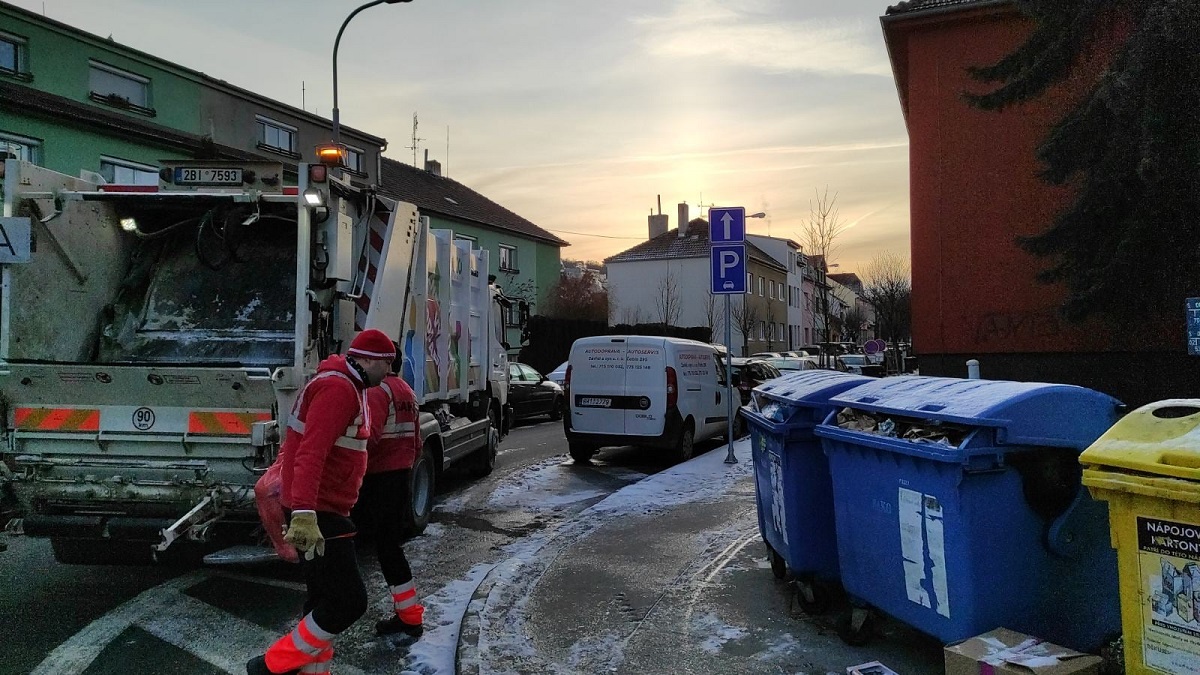 The collection of biowaste from 240-liter garbage bins began in April 2021. Since then, a total of 903.21 tons of biodegradable household waste from Brno has reached the Central Composting Plant. Credit: SAKO Brno.

Brno, Jan 04 (BD) – Last April, the City of Brno deployed nearly 1,000 bins for the collection of biowaste, mostly at existing waste sorting points. Since then, 903 tons of biodegradable waste have been transported to the Brno Central Composting Plant, with an average contamination rate of under 6%, as announced at a press conference this week by Petr Hladík, First Deputy Mayor, and Filip Leder, Chairman of the Board of SAKO Brno, which manages biowaste collection in Brno.

“At the moment, I can already call the pilot project of biowaste collection a success,” said Hladík. “I admit that there were some concerns, based on the experience of other cities, which had to limit the collection of biowaste due to the large amount of unwanted contamination. However, as it turns out, this is not the case in Brno. On the contrary, we believe that after evaluating the pilot operation, we could increase the number of bio-waste bins in the city. I am proud that the people of Brno have used the possibility of collecting household bio-waste very responsibly. We could see that this element of recycling services was lacking. From April 19th to December 31st, a total of 903.21 tons of biodegradable household waste reached the Central Composting Plant.”

The bins saw the highest amount of waste recycled during July and September, and the least in the first month after the start of the collection and during the Advent period. Over 30 tons of biowaste per week was collected in mid-July, then again for most of September and in mid-October.

“I assume that the milestone of 1,000 tons collected will come at the end of the month, because even during the winter months we can collect about 20 tons of biowaste per week,” said Leder. He said that plastic bags were the most common contaminating material placed in the bins, as well as food scraps of animal origin, including oils. “Cooking oils, meat, and food derived from animals do not belong in organic bins. Containers with excessive contamination do not get to the composting plant and end up in the incinerator instead, which is a pity, because the bio-waste can otherwise be used to produce quality compost. Some also confuse the brown bins with bins for mixed municipal waste, and dispose of materials belonging to the yellow and blue containers, such as cans, plastics or glass. In the summer, our staff even found one used tyre in the same bio-bin for four consecutive weeks, even though the waste collection center, which takes the tyres for free, was relatively close by.”

One crew is set aside for the collection of biowaste in Brno, which will gradually cover the whole city. They start each day at 6am, driving about 100 kilometers a day, and an average of 500 kilometers a week. The crew covered over 18,000 kilometers from the start of April to New Year’s Eve 2021.

The 240-liter brown bins are designed for the collection of kitchen biowaste, especially residues of plant-based food, peels and cuttings, kernels, coffee grinds, loose tea, and so on. Under no circumstances should animal waste appear there, such as meat, fats, skin and bones, dairy products, frying oils, packaging, newspapers, diapers, handkerchiefs, cigarettes or dead animals. For reasons of capacity, it is not suitable to fill the bins with cut grass, branches, leaves or other garden waste.