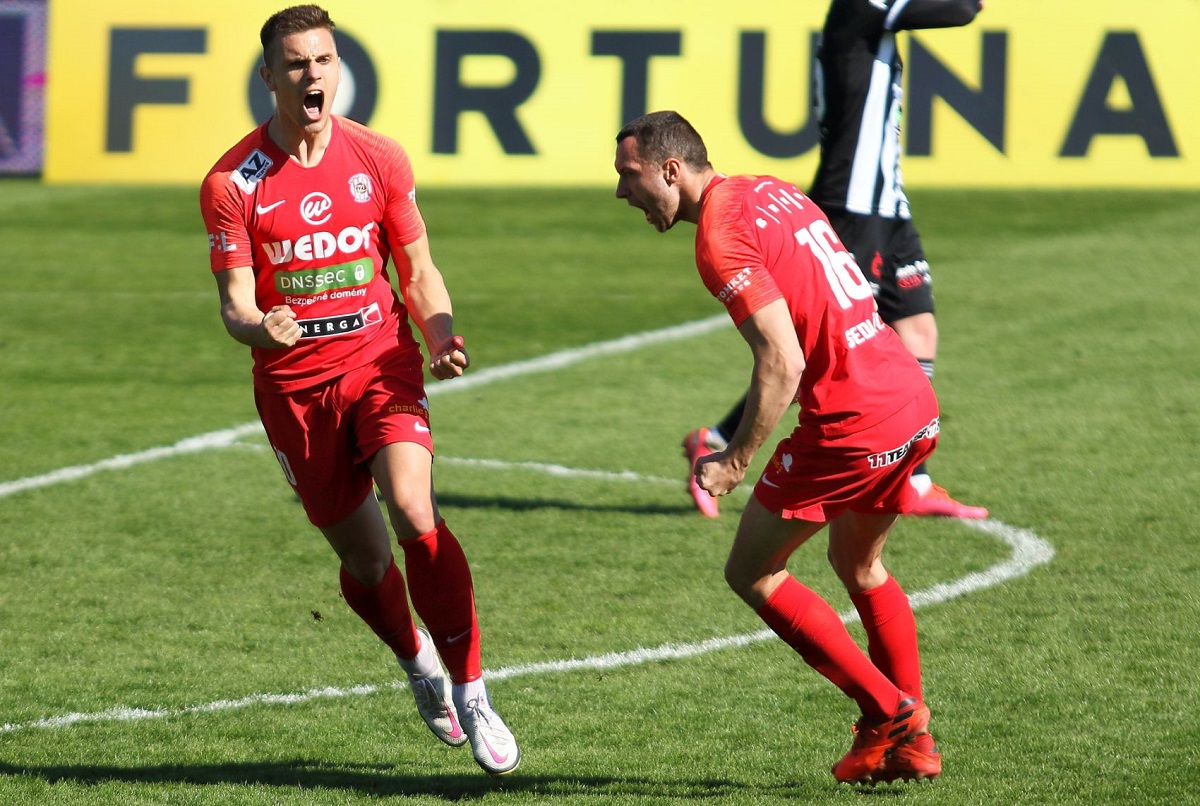 Top-team FC Zbrojovka is the target for everyone in the Fortuna: Národní Liga, including second-place AC Sparta Praha B this Friday in North Brno. Photo credit: FC Zbrojovka.

Brno is atop the Fortuna:Národní Liga with a four-point advantage through nine rounds, but second-place AC Sparta Praha B will come to town on Friday to try to chip away at that lead in what will, surely, be a lively atmosphere.

The game starts at 5 p.m. and, though, it could be taken as an embarrassment for the top team of the second-biggest city in the country to be playing in a league with the second team of the traditional league powerhouse, Sparta is still Sparta, and the crowd and team-appropriate chants will no doubt be in abundance.

Brno (7-1-1, 22 points) is on a roll. The team has won three games in a row and it is unbeaten since an 0-2 aberration in Prostějov in early August. Sparta B (6-0-3, 18 points) is in its first season at this level; it’s parent club is in third in the country’s top league, the Fortunate Liga.

Last week, Brno traveled to the northwest of the country and piled on the goals to win 1-6 at Ústí nad Labem, an organization that not long ago had been a fixture in the top league. The Brno offense was purring: Jakub Přichystal had two goals and an assist; Michal Ševčík, Jan Hladík and Jakub Řezníček all had a goal and an assist; and Adam Fousek had two assists.

Řezníček leads the league with seven goals through nine games.

Zbrojovka has the largest goal differential in the league with 20 goals scored and eight allowed (12), which is five better than the next best total.

Zbrojovka will have a MOL Cup game at Varnsdorf next Wednesday, where they will try to avenge a 2-2 draw in league play, which is one of the two blemishes on Zbrojovka’s record.

Another Friday night game follows after a weeklong break: Vyškov visits Brno on Oct. 15 at 5 p.m.

It took until three minutes into extra time, but SK Líšeň 2019 edged past FC Vysočina Jihlava, 2-1, with a penalty kick.

It was the fourth Fortuna:Národní Liga victory in a row for Líšeň (5-2-2, 17), which is in a three-way tie for third place with FK Varnsdorf and FK Dukla Praha.

Jan Silny converted the late-game penalty kick to notch is fifth goal of the season. He is third in the league.

Líšeň has outscored its opponents 8-1 in the four-game run. (Líšeň did get eliminated from the MOL Cup when it lost 0-3 to AC Sparta Praha in the third round on Sept. 22).

Basket Brno burst from the starting gates of the Kooperativa NBL season with two victories.

The first was a dominating home victory over GBA Fio banka J. Hradec, 110-83, where the final minutes of the game were played out by Brnoan teenagers. The second showed how Brno would handle a top scorer: Adam Číž got 37 points but his GEOSAN Kolín lost, 80-89.

Kolín was the team that beat Brno in the consolation-final series last season, leaving Brno in fourth place in what was its best season as an organization.

“We came here today richer in experience from last season,” said Lubomír Růžička, the head coach of Basket Brno after the Kolin game. “In short, we were prepared and we made fewer mistakes. I think we have a more mature team this year. It is a great win for us and it will strengthen us for further work.”

In additional to the victories, through two games Brno is leading the league in scoring (99.5-point average) and rebounds (54.5, which is nine more than second-place Praha).

The Kooperativa NBL has 12 teams. The first phase of the season has each play each other, home and away; the 22nd round is in mid-January. The top teams move on to the second phase in order to determine postseason seeding. The weakest teams face relegation. Last year, Basket Brno reached Group A1 for the first time when it finished fourth in the first phase of the season with a 13-9 record.

For updated information and the schedule for the Czech National Basketball League, go to the league website at https://nbl.basketball/. The Basket Brno team website is at https://basketbrno.cz/ . Use Google Chrome, right-click anywhere on the page and select “Translate to English”.

Žabiny Brno started the ZBL season with two victories, almost doubling up KARA Trutnov, 83-44, on Saturday and then holding off Slovanka in the fourth quarter, 50-69, on Tuesday.

Anna Jurčenková, who has returned to the team after a year away, made the difference in the final minutes of the game at Slovanka. She led the game with 14 points.

For KP Brno, Michaela Stejskalová, a former national-team player, had a 15-point performance to help the team take control of the second half and beat SBŠ Ostrava, 68-52.

Next, Šelmy Brno plays at VK Dukla Liberec and Královo Pole plays at Olymp, both on Thursday at 5 p.m.

Let this be yet another warning: Never leave a game early.

Last week HC Kometa got an end-of-game shock when they led HC Skoda Plzen scored with three seconds left in regulation time to tie the score at 5-5. After the extra period, Brno won the shootout and the two points in the standings.

The game, over all, was a strange one. Brno was down 4-0 before it rallied back with five straight goals.

“After a bad entry into the match, we are of course glad that we were able to turn such an unfavorable result on our side,” said Brno head coach Jiří Horáček. “Only a few seconds were missing in the home power play and we could have had three points. But then we took back the bonus point in overtime and today we are very happy for two points.”

HC Kometa had three wins in a row until a 3-2 extra-time loss at Sparta Praha on Sunday. Then the wheels came off in a 1-4 loss at home against HC Motor České Budějovice on Tuesday.

Brno plays at HC Verva Litvínov at 5:30 p.m. on Friday, then returns home on Sunday for a 5:20 game avainst HC Vitkovice Ridera, which will be televised on CT Sport.

For updated information and the schedule for the Tipsport extraliga, go to the league website at https://www.hokej.cz/tipsport-extraliga. The HC Kometa team website is at https://hc-kometa.cz/ . Use Google Chrome, right-click anywhere on the page and select “Translate to English”.

Lokomotiva Hopes to be Top of the Rest

After six rounds of the top women’s football league, the standings have settled into what many expected: Prague teams at the top, Slovacko just underneath and then the rest.

Lokomotiva Brno-Horní Heršpice, which is having its best season, is at the top of the rest in fourth place with a record of 3-0-3 and 9 points.

A connoisseur of the unpredictable and unscripted drama of sports.
View all posts by Bruno Zalubil →
« Number One Draws Attention To Disposable Waste Packaging
Beyond the Numbers of the Biggest Food Wasters: Households and Agriculture »