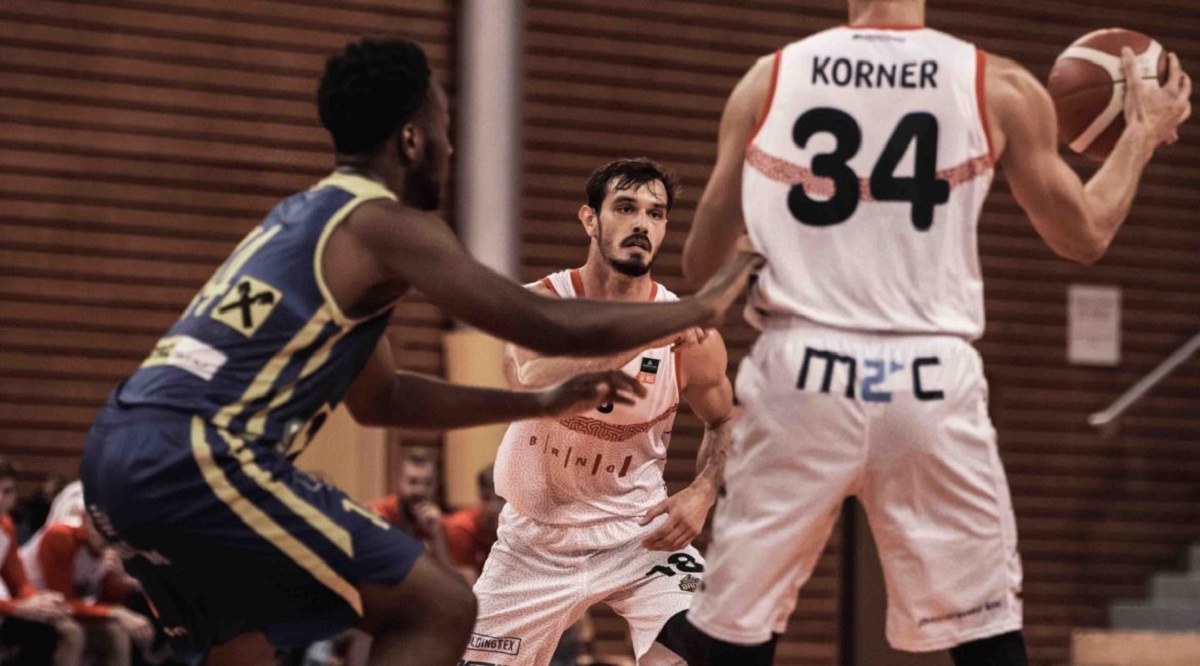 After their best ever season, Basket Brno are back with talented young players, several new faces, a lot of height and big hopes.

The season begins tonight at Hala Vodova when Basket Brno welcome GBA Fio Banka Jindřichův Hradec to town. Tip off is at 6pm.

Head coach Lubomír Růžička has a lot of options at his disposal to try to get the team back into the postseason and improve on their semi-final finish of last year.

Radek Farsky has gone to Greece to play professionally, but several top players have joined the team. Roman Marko has come down from Svitavy to work with the talented Viktor Půlpán to create a formidable backcourt that should be able to move the ball efficiently. Richard Bálint, an 18-year-old who was named the “Best Young Player of the 2020-21 Season” (see below) will also get a lot of playing time.

Šimon Puršl, who was among the Brno players to play for the national team in a couple of games, is a scoring and rebounding machine. Richard Körner was impressive on the wing in a few games a couple seasons ago before he got a better offer to play with Inter Bratislava; he is now back in Brno.

There is also a lot of height under the basket. In addition to captain Jakub Krakovič (205 cm), who is currently injured, Jakub Nečas (204 cm) and Ondřej Husták (214 cm), who both came up through the youth program, look to get a lot of playing time.

To add a foundation of lifelong basketball experience, post Hunter Mickelson (208 cm) and forward Rashad Madden are both from the state of Arkansas in the United States.

The Kooperativa NBL has 12 teams. The first phase of the season has each team play each other, home and away; the 22nd round is in mid-January. The top teams move on to the second phase in order to determine postseason seeding. The weakest teams face relegation.

Basket Brno got a bye in the first weekend of the season when their game against USK Prague was postponed.

Jindřichův Hradec, in their first year in the Kooperativa NBL, lost their opening game on Friday against Olomouc, 92-100.

“Jindřichův Hradec certainly did not get lost in the first match, when they narrowly lost in Olomouc,” said Nečas, who is 17 years old and the first-game poster boy for the team. “We have to focus mainly on ourselves and play our game. In preparation, we stepped up our performances in (preseason) games and the home hall should also play in our favor. We want to enter the new season with a win.”

Last year, Basket Brno reached Group A1 for the first time when they finished fourth in the first phase of the season with a 13-9 record. The fan base was light because of the coronavirus.

“I believe that Brno fans will find their way to Vodova Hall and create a nice atmosphere for the beginning of the new year,” Růžička said.

Hygiene measures are in place for tonight’s game.

Brno travel to GEOSAN Kolín on Saturday for a 5:45pm game. TVcom.cz is showing all of the league games.

For updated information and the schedule for the Czech National Basketball League, go to the league website at https://nbl.basketball/. The Basket Brno team website is at https://basketbrno.cz/ .

Richard Bálint, an 18-year-old Basket Brno player, was named the “Best Young Player of the 2020-21 season” last week for his success with both the Kooperativa NBL and the national U20 team.

Bálint played a total of 41 matches in the NBL, averaging 15 minutes and 7 points per game. He had the best free-throw percentage on the team (78.1%). He was a mainstay of the U20 youth team that won an important tournament and he even got playing time on the men’s national team in several preparatory matches.

“It’s great that someone noticed me after that first year at Kooperativa NBL,” Bálint said. “I take this award as motivation to continue working and to improve my own performance so that I am able to contribute out on the court.”

FC Zbrojovka beat Žižkov, 2-1, on Sunday night and took the top spot in the Fortuna:Národní Liga after eight rounds.

The next game is on the road at Ústí n. Labem on Friday at 6pm.

Zbrojovka entered the weekend just behind Dukla Praha (5-1-2, 16 points). Dukla, however, gave up a late goal at home and lost to Příbram in a nationally televised game on Friday.

SK Líšeň 2019 won their third game in a row to move into fourth place in the league.

Líšeň will try to extend their winning streak when they host ninth-place FC Vysočina Jihlava (3-2-3, 11) this Saturday at 4:30pm.

Through five games of the Tipsport extraliga season, HC Kometa clearly like 3s and 2s: Brno have won three games and lost two, and all three of their victories have been by scores of three goals to two, including two in extra time.

The most recent win was on Sunday on the home ice of HC Oceláři Třinec, which swept Brno last season in the quarterfinals and went on to defend their league title.

“Great hockey, up and down,” Kometa head coach Jiří Kalous said after the game. “From the middle of the match we leveled the game and we were a balanced opponent. These are very valuable points, especially against a team like Třinec. They are the defending champion, a great team.”

In this game, Tomáš Bartejs, with an assist from Daniel Rákos, scored the winner three minutes into extra time.

Kometa have two more road games this weekend: at HC Škoda Plzeň on Friday at 5:30pm and at HC Sparta Praha on Sunday at 4pm. The team return home next Tuesday to host HC Motor České Budějovice at 6pm.

For updated information and the schedule for the Tipsport extraliga, go to the league website at https://www.hokej.cz/tipsport-extraliga. The HC Kometa team website is at https://hc-kometa.cz/ .

After a week off for an international break — during which the Czech women’s national team took huge steps toward World Cup 2023 when they drew 1- 1 in the Netherlands and beat Cyprus, 8-0 — the domestic league will continue this weekend.

Several of the players on the extended national roster will be in South Brno to play Lokomotiva Brno-Horní Heršpice on Saturday at 11am.

A connoisseur of the unpredictable and unscripted drama of sports.
View all posts by Bruno Zalubil →
« Schoolchildren Choose Pirates and STAN or SPOLU Over Babis’s ANO
FutureGate Sci-Fi Film Festival 2021 Started Yesterday, With A Post-Apocalyptic Theme »