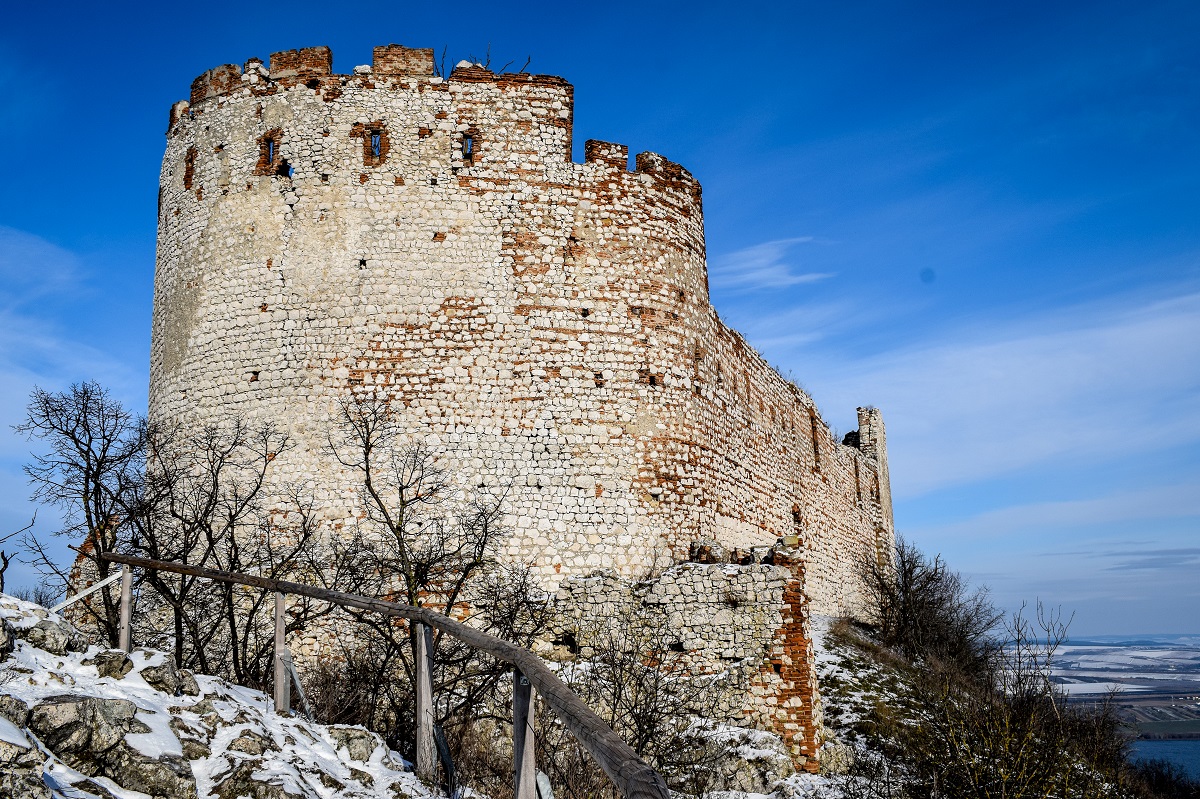 Curious about where to travel in the Czech Republic, places to visit in South Moravia or hiking near Brno? Brno Daily’s Kim Bingel takes us on an adventure through the historic ruins of Děvičky Castle and one of the world’s leading archaeological sites. Photo: Děvičky Castle, Pavlov, Czech Republic. Credit: KB / BD.

Having spent many months working from home, my mind has started to wander to all the places I have not yet seen. My feet itch for the adventures I know I cannot have and my heart aches to be somewhere far from the city streets. I remind myself that I am in a unique and beautiful country which should not be taken for granted. Surely, there must be local destinations to ease my wanderlust.

The wine-growing village of Pavlov, the archaeological treasure that is Dolní Věstonice and the ruins of Děvičky Castle are wonders that have earned their place on my list of destinations to visit when museums and cafes reopen. Until then, I can say without a doubt that the National Nature Reserve Děvín-Kotel-Soutěska is ideal for hiking.

Recently, I visited Děvičky Castle, about an hour’s drive south of Brno. I shouldn’t have been surprised by the number of families and friends who had planned a similar trip to see the castle ruins that weekend. Amidst a flurry of Czechs wearing city shoes and jeans, I tried not to feel out of place as a foreigner in my hiking gear and boots. Regardless of nationality, it doesn’t hurt to diversify your knowledge of spots to visit in the Czech Republic with the odd castle ruin, and perhaps decide to visit on a quiet weekday instead if you have the chance.

After a demanding ascent, a captivating view of the countryside and Nové Mlýny reservoir awaits. At the top, you will also find an information board (in Czech only) with a brief history of the ruins. I was fortunate to have a friend who could translate it and save me from yet another disappointing visit to a beautiful place without information in English.

The castle has earned a handful of names in its time: Dowina, Dewiczky, Dívčí Hrady and Maidenburg (under German colonization). According to legend, the three rock cliffs which stand in front of the castle are believed to be three petrified maidens. It is said that soft wailing can be heard from the stones on quiet evenings.

What remains of Děvičky Castle is the legacy of a castle built in 1222 to protect the trade route from Mikulov to Brno and Olomouc. Strategically positioned on a steep peak of one of the Pavlov Hills, it is inaccessible on three sides. It was destroyed during a raid in the 13th century and later built up again with the addition of a bastion in the renaissance style. During the Thirty Years’ War in the 1600’s, the Swedes plundered the castle and set fire to it. In the 18th century, it was completely abandoned and left to the elements.

After exploring the ruins for a little while, we stood at a crossroads and debated whether we had time for the 10km hike to Mikulov – deciding against it we made our way down. We had to be careful as we descended the icy path of the green route through the forest. Soon the path levelled out and offered a view over Pavlov. We passed the Boží muka (‘The passion of the Christ’) and vineyards until we reached the village streets.

If you’re the more adventurous type, you may not want to simply walk directly back to Pavlov, but could be tempted by the red route which takes you either to the beautiful town of Mikulov or to the small village of Dolní Věstonice near the bridge.

Looking out across the landscape from the castle, I was totally unaware that I was looking down on an archeological wonder. I’ve been a huge fan of archaeological sites ever since I visited the neolithic settlements on the Orkney Islands in the North of Scotland. Even at the time I thought of how much the long-stretching water’s edge and Moravian landscape with sparse hills reminded me of Scotland.

The small, unassuming village, Dolní Věstonice, is known for a number of archaeological sites from the ice age and is where the oldest human settlement in the world was discovered. Mammoth hunters in the Czech Republic? It still amazes me.

Perhaps you have heard of the Venus of Dolní Věstonice? It was found here during archaeological excavations in 1925 and is believed to be the oldest surviving ceramic work. The prehistoric statue is currently kept at the Anthropos Pavilion in Brno and is rarely on display.

In this village, you can be sure to find a Vinařství (‘wine store’), and within a stone’s throw, quite a few were open and selling products to take away. I learned that the Pavlov Hills are also part of the Pálava Protected Landscape Area, a UNESCO Biosphere Reserve.

Adding to the beauty, culture and history of the village is the Pavlov Archeopark. The museum, with modern design, takes visitors back to the time of mammoth hunters around 30,000 years ago. Partially underground, the exhibition reveals the fascinating culture of hunter-gatherers, including their rituals, burial rites and art. The collection of findings from Pavlov, Dolní Věstonice and Milovice include skeletal remains, animal bones, venus sculptures, tools and evidence of technologies to grind stone, weave fabric and produce ceramics.

Take a virtual tour of the museum here.

How to Get to the Castle Ruins?

I recommend installing the Mapy.cz and IDOS transport apps, then using IDOS you can search for the best way to get to Pavlov using public transport. After you arrive at the Pavlov bus stop, you can follow either the markings of the yellow or the green route up to the castle. For those who prefer to drive, there are several parking spots in Pavlov which cost CZK 50 for the day.

Check out the routes nearby on Mapy.cz.

All photos were taken by Kim Bingel / BD.

https://brnodaily.cz/2021/01/31/travel-tips/explore-pavlovs-13th-century-castle-ruins-and-archaeological-wonders/https://brnodaily.cz/wp-content/uploads/2021/01/devicky-castle-Pavlov-ruins-credit-KB-BD-2-1024x682.jpghttps://brnodaily.cz/wp-content/uploads/2021/01/devicky-castle-Pavlov-ruins-credit-KB-BD-2-150x100.jpg2021-01-31T13:12:14+01:00Kim BingelColumnOpinionTravelBrno,South Moravia,Travel TipsCurious about where to travel in the Czech Republic, places to visit in South Moravia or hiking near Brno? Brno Daily’s Kim Bingel takes us on an adventure through the historic ruins of Děvičky Castle and one of the world's leading archaeological sites. Photo: Děvičky Castle, Pavlov, Czech Republic....Kim BingelKim Bingelkjbingel@gmail.comAuthorSouth African in Brno. Independent international traveller. Enjoys nature and a sustainable lifestyle.Brno Daily