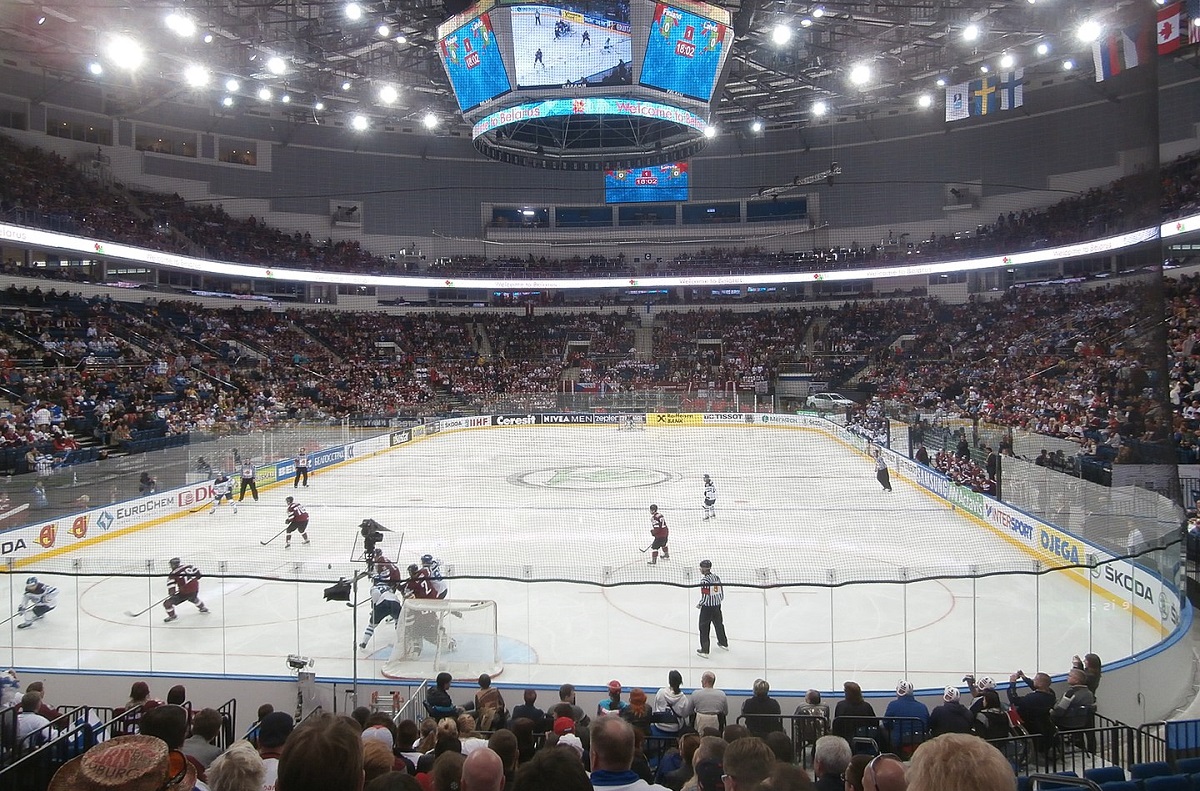 The Czech carmaker Škoda Auto has announced that it will not sponsor this year’s Ice Hockey World Championships, part of which are due to be held in Belarus, due to concerns over human rights. The International Ice Hockey Federation is considering Denmark or Slovakia as alternative locations for the championships. Photo: Minsk Arena in Belarus, Finland v.s. Latvia in May 2014. Credit: By Pjotr Mahhonin – Own work, via Wikimedia Commons under license CC BY-SA 4.0.

Czech Rep., Jan 18 (BD) – Škoda Auto, a leading carmaker from the Czech Republic, has announced that it will withdraw its sponsorship of this year’s Ice Hockey World Championships, due to be co-hosted by Belarus and Latvia from May 21st to June 6th. Explaining their reasons on Twitter, Škoda Auto wrote that “We have been a proud partner of the World Cup for 28 years. At the same time, however, we consistently respect and promote all human rights. That is why Škoda Auto will resign as a sponsor of the IIHF 2021 Ice Hockey World Championships if Belarus is confirmed as its co-organizer,”.

The International Ice Hockey Federation (IIHF) has itself been under pressure for several weeks from a number of countries over Belarus remaining as a host nation. It appears likely that the location of the championships will be changed, amid calls for Belarus to be expelled from the event due to Alyaksandr Lukashenka’s continuing crackdown on protesters who dispute the results of the August 2020 election. Czech Foreign Minister Tomáš Petříček wrote on Twitter that he could not imagine the competition taking place in Belarus, adding: “Thank you, Škoda. I am glad that, as the flagship of our companies, it has been decided not to support the beating of girls and violation of human rights in Belarus. The best advertisement is to have a reputation as decent people”.

IIHF president René Fasel stated in an interview on January 13th that the championships may be transferred to Denmark or Slovakia. Fasel added, “The Belarusian government agreed to open and constructive dialogue with the opposition to take the 2021 IIHF Ice Hockey World Championships out of the political focus and to use sports as a means to bring people together. We acknowledge that our requests are outside sport and going into the direction of politics, but we feel the end results of our requests were necessary to ensure a safe championship.”

https://brnodaily.cz/2021/01/18/news/politics/skoda-auto-withdraws-sponsorship-for-ice-hockey-world-championships-in-belarus/https://brnodaily.cz/wp-content/uploads/2021/01/Minsk-Arena-2014-Finland-Latvia-By-Pjotr-Mahhonin-Own-work-CC-BY-SA-4.0-httpscommons.wikimedia.orgwindex.phpcurid53633561-1024x675.jpghttps://brnodaily.cz/wp-content/uploads/2021/01/Minsk-Arena-2014-Finland-Latvia-By-Pjotr-Mahhonin-Own-work-CC-BY-SA-4.0-httpscommons.wikimedia.orgwindex.phpcurid53633561-150x99.jpg2021-01-18T16:32:33+01:00Melis KarabulutCzech Republic / WorldPoliticsCars,Czech Republic,Politics,SportThe Czech carmaker Škoda Auto has announced that it will not sponsor this year's Ice Hockey World Championships, part of which are due to be held in Belarus, due to concerns over human rights. The International Ice Hockey Federation is considering Denmark or Slovakia as alternative locations for the...Melis KarabulutMelis Karabulutmeliskarabulut97@gmail.comAuthorA journalist from Turkey; an enthusiast of investigative stories on migration and politics in the Czech Republic. Writes about the journeys of inspirational expats living in Brno; and the bits of life that spark inspiration.Brno Daily

A journalist from Turkey; an enthusiast of investigative stories on migration and politics in the Czech Republic. Writes about the journeys of inspirational expats living in Brno; and the bits of life that spark inspiration.
View all posts by Melis Karabulut →
« Weather Report: Warm Front To Bring Freezing Rain and Ice on Roads
Winter Swimming: A Growing Trend in the Czech Republic »