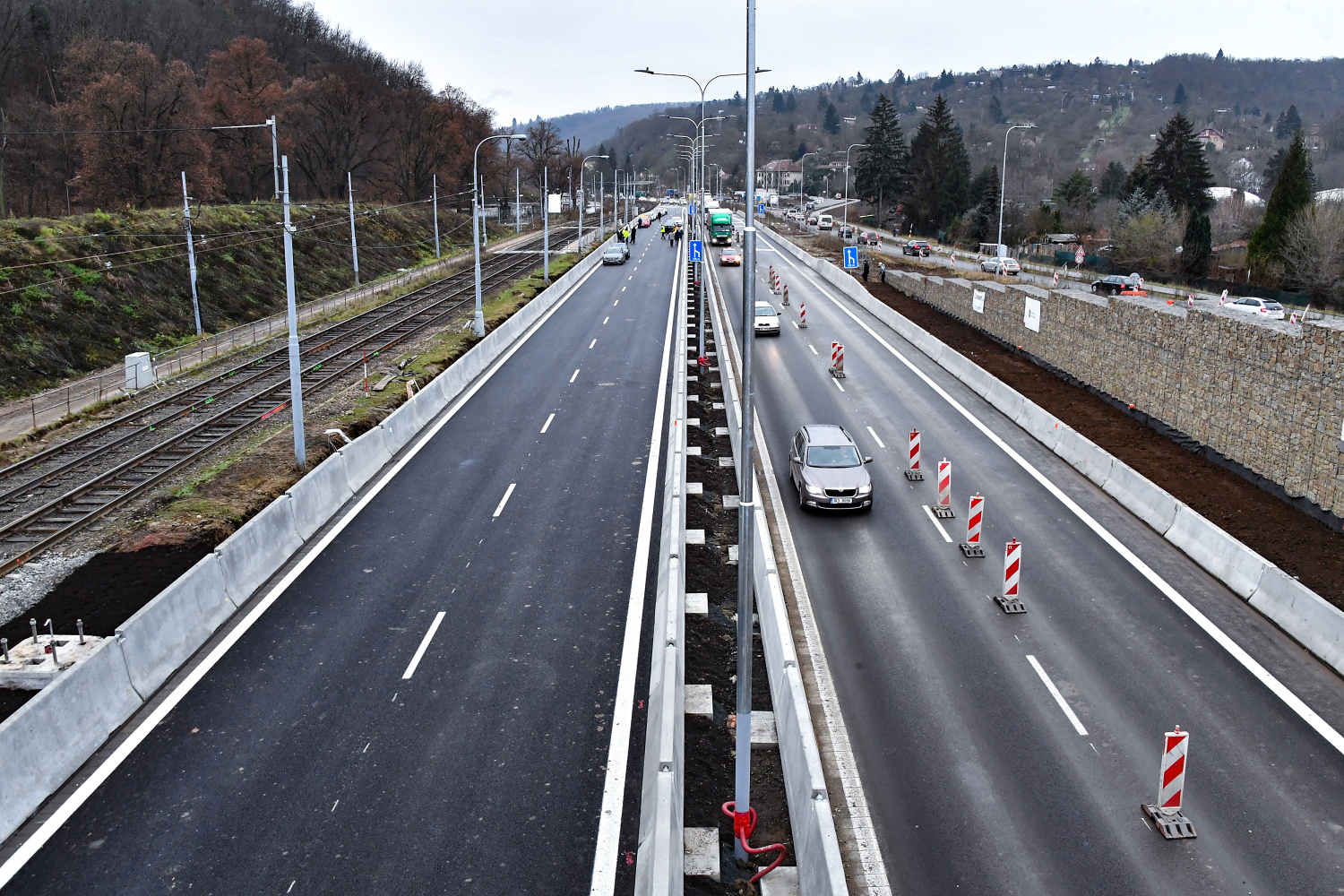 As of December 17th, the road layout has changed on Žabovřeská. Fanderlíkova and the service road used by those driving from Bystrc to Pisárky have closed. The footbridge over the four-lane road is open, and the roads completed in the first stage have come back into limited use. The project should facilitate smoother traffic. Photo credit: M. Schmerkova, MMB.

Brno, Dec 18 (BD) – From Thursday, the road layout on Žabovřeská has changed. The roads used to access Pisárky from Bystrc, Fanderlíkova and a service road, have closed completely. Due to the closure of Fanderlíkova, the passage on Žabovřeská going from the Královopolský tunnel will be narrowed.

Yesterday, the footbridge opened over the four-lane road, an important service facility for the construction work, and works from the first stage came into limited use. In both stages of construction, CZK 200 million has been allocated to the project from the Brno city budget. The expansion of the road to four lanes will facilitate smoother traffic.

The second stage of construction begins at the turn of the year between Kamenomlýnský Bridge and the Hlinky level crossing. From January, tram line 1 will close for two years to make space for tunnelling. The tram line will be moved so that the road can be widened. The excavation of the tunnel will begin in Spring.

The first stage of construction was between the Kníničský and Kamenomlýnský bridges. A service road and a footbridge over the busy road were built to solve the dangerous crossing between Žabovřeské louky and the Bráfova stop.

“As soon as the footbridge is operational, workers will complete the final modifications to the road. The four-lane arrangement will thus be operational from Thursday evening at the latest, for limited use. We plan the full opening at the end of March 2021, by which time all sidewalks, accompanying roads and landscaping will be complete. The postponement of the deadline was not only due to covid, but also complications with the building permit. The construction, which began on October 8th, 2018, will move into the second stage next year. The outer city ring road project is very important for the city, and needs to be completed without causing undue delays. These occurred mainly on Žabovřeská due to the narrowing of the road, which caused significant traffic jams, especially during rush hour,” said the Mayor of Brno, Markéta Vaňková.

Construction of the Outer City Ring Road (VMO) Žabovřeská is being carried out by the city in cooperation with the Directorate of Roads and Motorways of the Czech Republic (ŘSD).

“As part of the construction, the city is mainly providing construction facilities related to the service of the area, such as the service roads Žabovřeské louky and Fanderlíkova, sidewalks, the footbridge over Žabovřeská, which cost about CZK 30 million, public lighting and the Bráfova tram stop. The largest financial investment is the construction of roads and sidewalks to serve the territory of Žabovřeské louky along the VMO Žabovřeská for motor and non-motor transport, including bus stops for public transport. This cost about CZK 42 million,” said Deputy Mayor Robert Kerndl (ODS).

“In this part of the construction, it will be necessary to break through into the tram tunnel, to create the necessary space for the widening of the road. This will require the two-year closure of tram line 1, which will allow the works to be completed in a significantly shorter time. We anticipate that the tram in this area will stop running in January 2021, but service will continue to Stránského and Bráfova stops. The stop at Konečné náměstí, which has been extended and made accessible in preparation for the increase of tram traffic via Veveří, also now has a traffic light. A connection has also been made in the triangle at Vozovna Komín. These steps had to be taken before routes to Žabovřeská were suspended,” said Petr Kratochvíl (ODS), Brno City Council member for transport.

The construction project is one of the city’s largest strategic projects. It will result in a four-lane road for the entire length of Žabovřeská, with the tram line moving to a partially excavated and sanded tunnel. Two footbridges will be built between the Kníničský bridge and the Hlinky level crossing for pedestrians to cross the busy road.

“We have 33 buildings here, which mainly provide services for the accompanying roads and sidewalks. The footbridge will cross the sidewalk over the I/42 road and the Pisárky – Komín tram line, thus connecting Wilson’s Forest with the left bank of the Svratka River. We are also planting a lot of greenery and making other modifications to vegetation costing more than CZK 13 million, and upgrading a neo-Gothic chapel from 1884, which is a cultural monument. While the first stage cost the city about CZK 104 million, a quarter of the total costs, for the second stage we should pay about CZK 121 million,” added David Grund (ODS), Brno City Councilor for investment.

https://brnodaily.cz/2020/12/18/news/transport/changes-to-road-layout-as-brnos-outer-city-ring-road-project-moves-to-stage-ii/https://brnodaily.cz/wp-content/uploads/2020/12/Ring-road-transport-brno-traffic-201217_VMO_Zabovreska-sch-courtesy-MMB-1024x683.jpghttps://brnodaily.cz/wp-content/uploads/2020/12/Ring-road-transport-brno-traffic-201217_VMO_Zabovreska-sch-courtesy-MMB-150x100.jpg2020-12-18T10:21:19+01:00Kim BingelCzech Republic / WorldTransportBrno,Czech Republic,News,Traffic,TransportAs of December 17th, the road layout has changed on Žabovřeská. Fanderlíkova and the service road used by those driving from Bystrc to Pisárky have closed. The footbridge over the four-lane road is open, and the roads completed in the first stage have come back into limited use. The...Kim BingelKim Bingelkjbingel@gmail.comAuthorSouth African in Brno. Independent international traveller. Enjoys nature and a sustainable lifestyle.Brno Daily