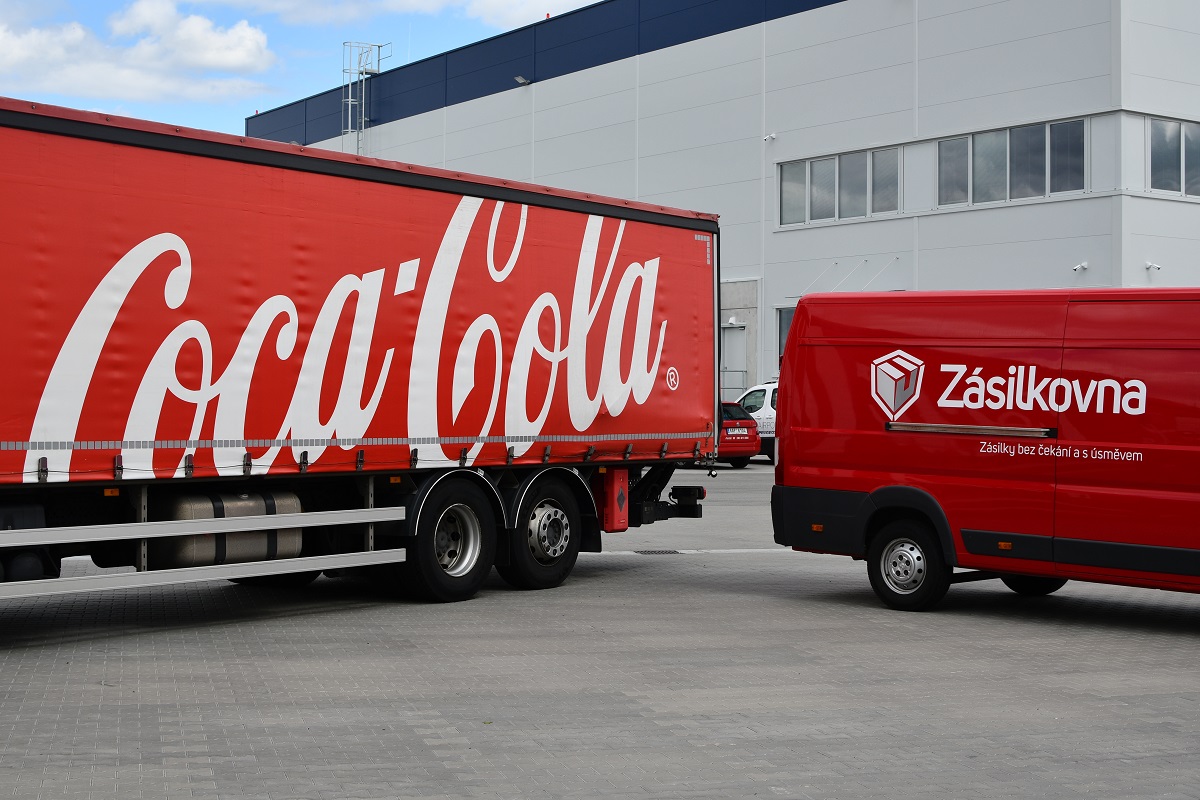 The tenants are logistics companies Coca-Cola HBC and Zásilkovna, who are already operating in their new hub. The new hall, which was ceremoniously opened on Thursday, covers around 9,500 m2, and is just a part of the logistics and distribution complex that the Accolade Group are hoping to build around the airport. Photo credit: TMA / Brno Daily.

Brno, Aug 31 (BD) – Last Thursday, a new modern logistics and storage hall next to Brno-Turany Airport was opened with a ribbon-cutting ceremony, by representatives from the owner of the park, Accolade, the constructors of the logistics area, Panattoni, and the two new tenants: Coca-Cola HBC and Zásilkovna. The halls cover 9,500 m2 and function primarily as distribution centres and depots.

The new hall is part of Accolade’s wider goal to build a large multimodal complex around the airport, and, according to the company, it was built with the aim of achieving the highest possible BREEAM certification for environmental sustainability, reflecting the company’s emphasis on durability, sustainability and environmentalism in their facilities. “If we want to be self-sufficient and develop sustainable business on the old continent, modern halls seem to be the right path,” said Milan Kratina, CEO of the Accolade Group.

According to all parties involved in the opening and operating of the new hall, its location, and the possibility of a future multimodal complex, are considered attractive and strategically beneficial. This is not only because of its vicinity to the airport, but also to Brno itself, which according to Kratina is regarded as an “excellent location,” that “[connects] four key Central European markets and attracts large players.” And while opening the new hall now, as the majority of the economy has seen a slowdown in turnover due to the coronavirus, seems counter-intuitive, this does not apply to the new tenants operating at the hall, as certain sectors, most notably e-commerce, have seen business booming. According to Kratina, e-commerce, warehousing and logistics have proven to be a key component of today’s European economy, and have even kept it going during “the deepest quarantine.”

Delivery company Zásilkovna, part of the Packeta Group and one of the new tenants, is one of the big players that has both seen a huge boost in business due to the boom in e-commerce, and been looking at Brno due to its strategic logistics advantages. “This year, we will probably surpass another magical milestone in our ten-year history, namely half a million shipments in a single day. That is why we have significantly strengthened our portfolio of depots; we currently have eleven in the Czech Republic, and by the end of October we will reach number fourteen. Brno is one of our key strategic locations,” explained Simona Kijonková, founder of Zásilkovna and CEO of the Packeta Group.

For the other tenant Coca-Cola HBC, the logistics partner of the well-known drinks giant, Brno is a strategic solution to the lack of efficient direct delivery from any of their production plants to their customers in Moravia. From the new hall, they will be supplying approximately 5,000 customers in the Moravian region. “In 2012, we transformed the traditional branch with several days of stock in Brno into a relatively unique break-bulk cross-dock distribution model, where we deliver only as many goods on a daily basis as we need for sale the next day. This operation is thus highly efficient for us, now even in more modern conditions – that is, exactly as we need it,” said Jan Turek, supply-chain manager of Coca-Cola HBC. Now, the bottles at the new hall stay there for only a couple of hours at most, and approximately 10 to 12 delivery trucks leave the facility every day.

Although the new hall is an important location for these big economic players, and the opening of the new facility should lead to improvements in service for the tenants’ South Moravian customers, its direct impact on the region’s economic development, especially employment, seems minimal. Despite the volume of goods moving through the hall, Zásilkovna employs just 60 staff at the Turany park, and Coca-Cola HBC a further 40. Zásilkovna, currently seeing enormous growth in packages handled, of over 100% year-on-year, is planning to invest CZK 170 million into automation of its processes in 2020-21, compared to just CZK 3 million into staff and human resources.

https://brnodaily.cz/2020/08/31/brno/new-sustainable-hall-for-drinks-and-packages-opens-at-brno-airport/https://brnodaily.cz/wp-content/uploads/2020/08/cocacola-zasilkovna-trucks-credit-TMA-BD-1-1024x683.jpghttps://brnodaily.cz/wp-content/uploads/2020/08/cocacola-zasilkovna-trucks-credit-TMA-BD-1-150x100.jpg2020-08-31T12:38:14+02:00Tessa AdamsonBrnoNewsBrno,Business,Economy,NewsThe tenants are logistics companies Coca-Cola HBC and Zásilkovna, who are already operating in their new hub. The new hall, which was ceremoniously opened on Thursday, covers around 9,500 m2, and is just a part of the logistics and distribution complex that the Accolade Group are hoping to build...Tessa Adamson T.M.Adamson@hotmail.comAuthorExpat student from the Netherlands, passionate about writing, travelling, languages and politics.Brno Daily