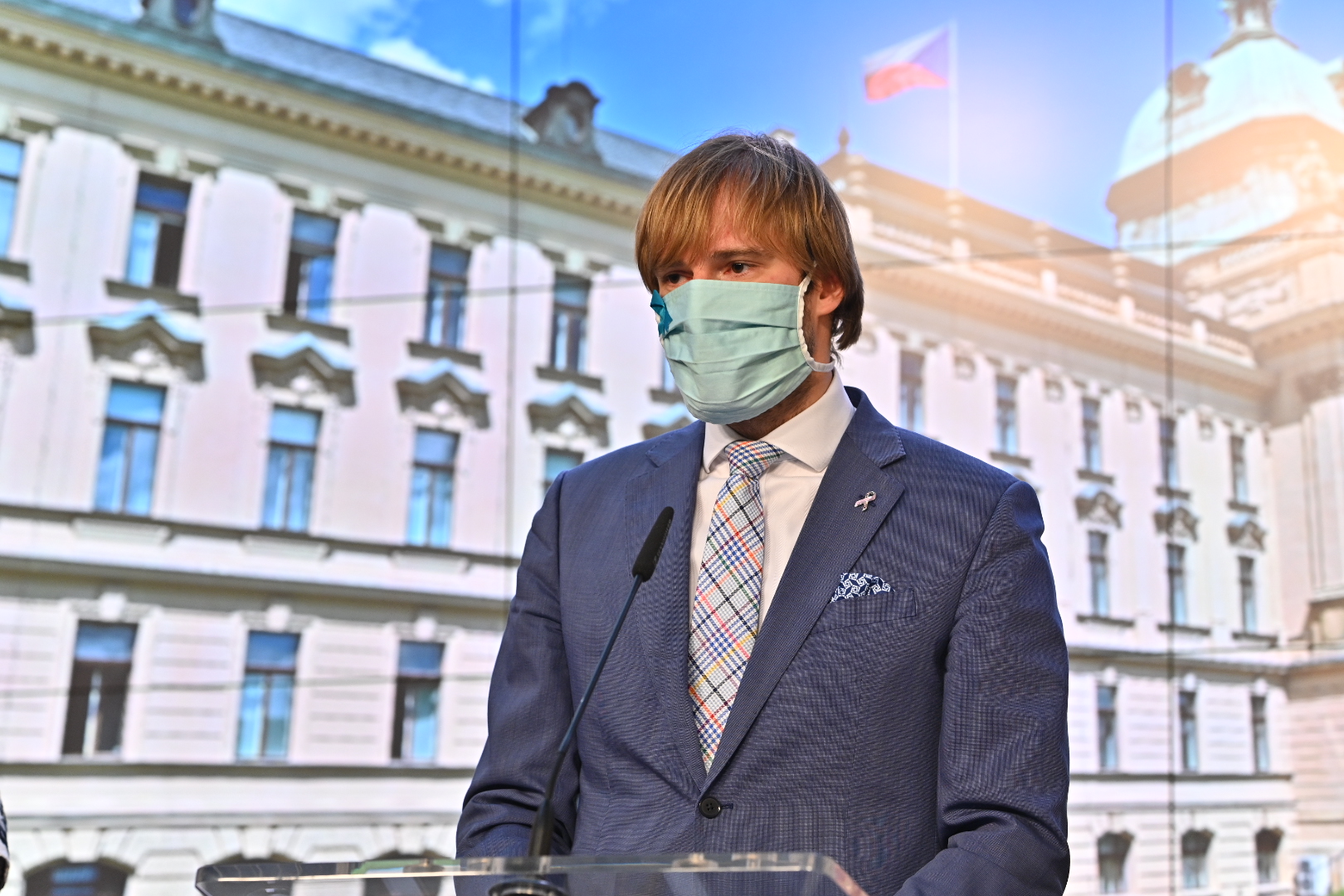 The new regulations announced on Wednesday, which would have reintroduced the requirement to wear facemasks in indoor public spaces, were then changed one day later, meaning it will no longer be necessary to wear the facemasks in most of the places originally announced. The changes were attributed to “new developments” since the measures were originally discussed and announced on Monday. Photo credit: Vlada.cz.

Czech Rep., Aug 21 (BD) – Yesterday, Minister of Health Adam Vojtech (ANO) announced that facemask regulations to apply from September had been amended after a meeting with Prime Minister Andrej Babis (ANO), where they had discussed the extraordinary measures that were issued the day before. Under the updated regulations, set to come into force from September 1st, facemasks will now only be mandatory on public transport, in public offices and official buildings, post offices, social and medical facilities, polling stations, and at indoor events attended by more than 100 people.

Facemasks will no longer be required in any shops or shopping centres, or when visiting pubs, restaurants, cafes, services such as hairdressers or massage salons, or indoor events below 100 participants.

Schools will now be subject to the district-level traffic light system, and facemasks become mandatory only if the school is in an orange or red district. So far districts have only been evaluated as white or green. For the start of the school year, the risk map will be published on Friday, August 28th, rather than Monday, “so that schools can prepare for it,” said Chief Hygienist Jarmila Rážová at the press conference, according to CTK. She added that the risk map would subsequently be published at fortnightly intervals.

While facemasks now only have to be worn at indoor events with more than 100 people, the regulations will apply as planned to theaters, cinemas and churches. In restaurants and other catering facilities such as pubs and cafes, visitors are no longer going to be required to wear facemasks, even when not eating, but they will be mandatory for staff of these establishments.

The previously-announced exceptions to the regulation will remain, including court participants, judges, witnesses and experts; TV and radio moderators and reporters; performing musicians, actors and dancers; bus or tram drivers who are not in direct contact with passengers; children under the age of two; and people with mental disabilities. Facemasks will also not be required for athletes during competitions; during exercise in gyms; in swimming pools and saunas; when photographing portraits; for participants of official academic ceremonies; or for couples at their weddings or registrations of partnerships.

According to CTK, Babis told reporters yesterday that he “did not like the extraordinary measures issued, and [they] contained many exceptions he did not understand,” which is why he met with Vojtech. The meeting was also attended by the Minister of Education Robert Plaga (ANO), representatives of the army, hygienists and the Institute of Health Information and Statistics.

Vojtech said that the vast majority of measures would not change. The reason for yesterday’s update to the regulation, he explained, was that the situation had developed since Monday, when the rules were announced, and that they were “reacting to the situation,” reported CTK.

The updated regulations have not yet been officially published.

https://brnodaily.cz/2020/08/21/news/politics/regulation-requiring-facemasks-indoors-from-september-partially-withdrawn/https://brnodaily.cz/wp-content/uploads/2020/08/vojtech-credit-vlada.cz-1-1024x683.jpghttps://brnodaily.cz/wp-content/uploads/2020/08/vojtech-credit-vlada.cz-1-150x100.jpg2020-08-21T14:32:05+02:00Tessa AdamsonCzech Republic / WorldPoliticsCoronavirus,Czech Republic,News,PoliticsThe new regulations announced on Wednesday, which would have reintroduced the requirement to wear facemasks in indoor public spaces, were then changed one day later, meaning it will no longer be necessary to wear the facemasks in most of the places originally announced. The changes were attributed to “new...Tessa Adamson T.M.Adamson@hotmail.comAuthorExpat student from the Netherlands, passionate about writing, travelling, languages and politics.Brno Daily

Expat student from the Netherlands, passionate about writing, travelling, languages and politics.
View all posts by Tessa Adamson →
« National Cleanup Day Coming Up in September
Brno from B to Ž: A Tough-Love Guide to the City’s 48 Neighborhoods, Part 4 – Bystrc »