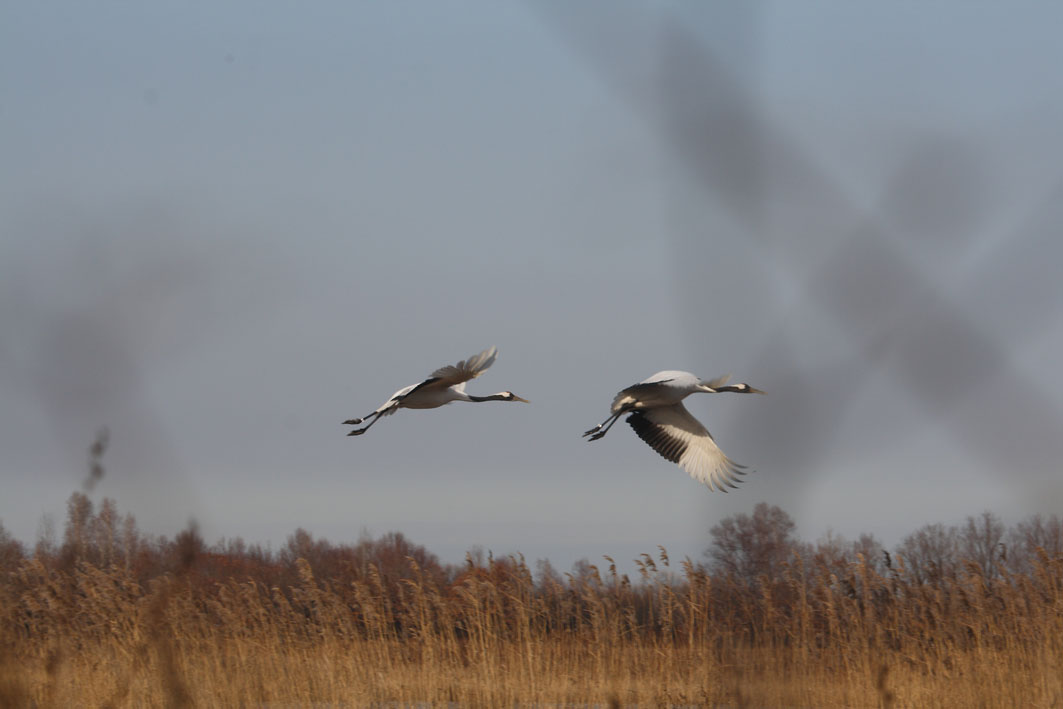 Two cranes that were raised in captivity have found their way back after winter to where they were released. Cranes need to learn migration routes from other birds, and establishing that they were able to learn from wild cranes marks a milestone in the project to reintroduce them to the wild. Photo: Courtesy of Khingan Nature Reserve.

Brno, Jun 23 (BD) – This week saw a welcome milestone for Brno Zoo’s program to reintroduce Manchurian and Daurian cranes to the wild, as two cranes that were bred in captivity were able to find their way back to where they were released after winter. Because cranes do not have a genetically imprinted migration route and have to learn from their parents, this presents a challenge when introducing them to the wild. With this milestone, the project has shown that released cranes can learn from other birds as well, improving the chance of successful reintroduction.

Three bird eggs were shipped from Brno Zoo to the Khingan Nature Reserve in the Amur region of eastern Russia, where they were monitored by staff at the reserve, as well as ornithologists from China, South Korea and the USA. One of the birds was sadly found dead in the reserve earlier this year. The remaining two are a female Manchurian crane named Bomnak, and a male Daurian crane named Areta.

Staff from Brno Zoo reported that, after the release, Bomnak flew to a wintering ground near the town of Lushun, China. “In the spring, according to radio data, it turned out that she had arrived back in the Amur region and was at the shore of Lake Sorokino, in the Antonovskoye Forest Reserve. A survey of this area showed that she had returned from the wintering ground in a pair,” said Mikhail Parilov of the Khingan Nature Reserve.

The male Areta wintered on the Korean peninsula and spent most of his time in the south-eastern part of North Korea. He returned to the Amur region about a week later than Bomnak. “He appeared near the reserve, near where he was released last year. He did not stay in the reserve, but instead flew to the Konstantinovsky district. As a non-territorial bird, he embarks on long flights and resides mainly on agricultural land,” added Parilov. The project team are especially pleased that Areta was able to join a flock of wild cranes, even as a bird bred in captivity. He is expected to remain a part of the group until he reaches adulthood in 1-2 years.

You can follow the cranes’ movements yourself on this map.

About the Brno Zoo Repatriation Program

The project for the repatriation and protection of cranes began in 2015, when Brno Zoo first transported two Manchurian crane eggs to a crane reintroduction station in the Khingan Reserve. In the following years, other crane-breeding zoos joined the program, which was subsequently expanded to include Daurian crane eggs. The Khingan Crane Reintroduction Station has been repatriating cranes for more than 30 years, but only now, thanks to cooperation with Brno Zoo, does it have the opportunity to monitor their movement and behavior in the wild.

https://brnodaily.cz/2020/06/23/brno/cranes-bred-in-captivity-return-home-after-winter-in-successful-reintroduction-program/https://brnodaily.cz/wp-content/uploads/2020/06/cranes-foto-archive-Khingan-Nature-Reserve-2-1-1024x683.jpghttps://brnodaily.cz/wp-content/uploads/2020/06/cranes-foto-archive-Khingan-Nature-Reserve-2-1-150x100.jpg2020-06-23T09:27:13+02:00Tessa AdamsonBrnoNewsAnimals,Brno,NewsTwo cranes that were raised in captivity have found their way back after winter to where they were released. Cranes need to learn migration routes from other birds, and establishing that they were able to learn from wild cranes marks a milestone in the project to reintroduce them to...Tessa Adamson T.M.Adamson@hotmail.comAuthorExpat student from the Netherlands, passionate about writing, travelling, languages and politics.Brno Daily