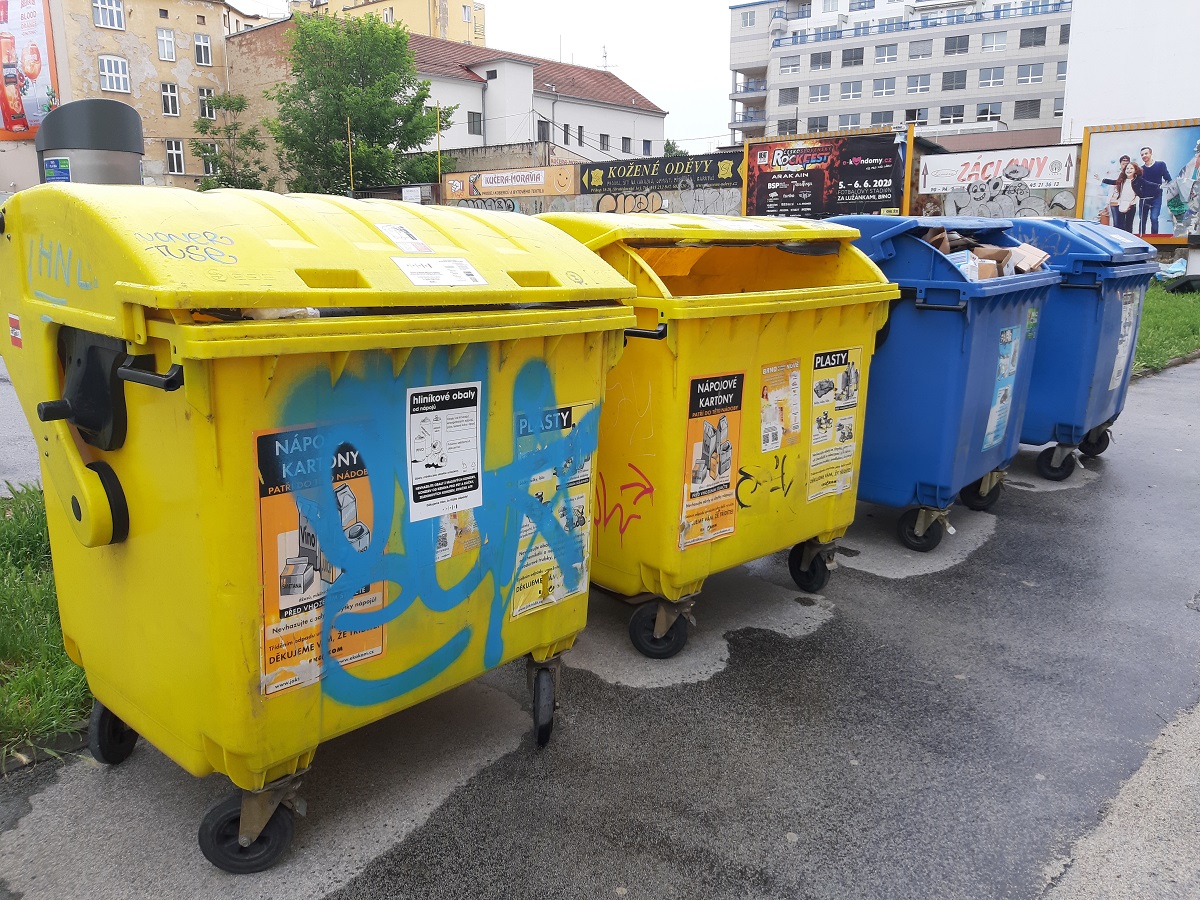 The Czech government will provide financial incentives for municipalities to expand the recycling of metal waste, including food and drink cans, by allowing it to be disposed of in yellow plastic recycling bins. The scheme will be administered by EKO-KOM, the company authorized to provide the bins, and begins in July. Photo: BD.

Czech Rep., May 28 (BD) – Recycling of plastic and glass is quite straightforward in the Czech Republic, using bins placed within a short distance of most people’s houses. However, metal waste is a different story; there are 9,000 containers for metal waste in the country, compared to almost 180,000 for plastic. As a result, while 88% of paper waste is recycled, and 79% of glass, only 57% of metals are recycled.

The Czech government hopes to improve this figure by providing financial incentives to municipalities to allow residents to also use the plastic containers for metal waste, which is currently only possible at certain sites in Czech cities. According to Environment Minister Richard Brabec (ANO), this is the most convenient method. It is then relatively easy to separate metal from plastic using automated processes, either with a magnet or, in the case of aluminium cans, a stream of air.

The move has been welcomed by environmentalists. Speaking to Czech newspaper Prava, Ivo Kropáček, an expert on waste from the Duha (Rainbow) environmentalist group, explained the benefits: “It is very positive, because we have had few metal containers in the Czech Republic for a long time and households have a problem sorting cans, whereas we have a lot of plastic containers.”

EKO-KOM, the company which manages the containers, will pay municipalities per container available for metal recycling, as well as dramatically increasing the money paid to recycling plants per ton of waste recycled, to compensate for the extra costs incurred sorting the metal. These payments will be funded by the Czech government. The aim is to make metal recycling available to most citizens by 2022.

https://brnodaily.cz/2020/05/28/news/politics/recycling-of-metal-waste-to-be-expanded-from-july/https://brnodaily.cz/wp-content/uploads/2020/05/Bins-credit-BD-1024x768.jpghttps://brnodaily.cz/wp-content/uploads/2020/05/Bins-credit-BD-150x113.jpg2020-05-28T16:32:36+02:00Jack StephensCzech Republic / WorldPoliticsCzech Republic,Ecology,Environment,RecyclingThe Czech government will provide financial incentives for municipalities to expand the recycling of metal waste, including food and drink cans, by allowing it to be disposed of in yellow plastic recycling bins. The scheme will be administered by EKO-KOM, the company authorized to provide the bins, and begins...Jack Stephens jack.stephens50@gmail.comAuthorA writer and English teacher originally from London who has lived in Brno since 2011, interested in politics, low culture, and all things strange and/or Czech.Brno Daily

A writer and English teacher originally from London who has lived in Brno since 2011, interested in politics, low culture, and all things strange and/or Czech.
View all posts by Jack Stephens →
« Brno Career Advice App Salmondo Temporarily Offered To Schools For Free
Two New Streets and a Square to be Added to the Map of Brno »