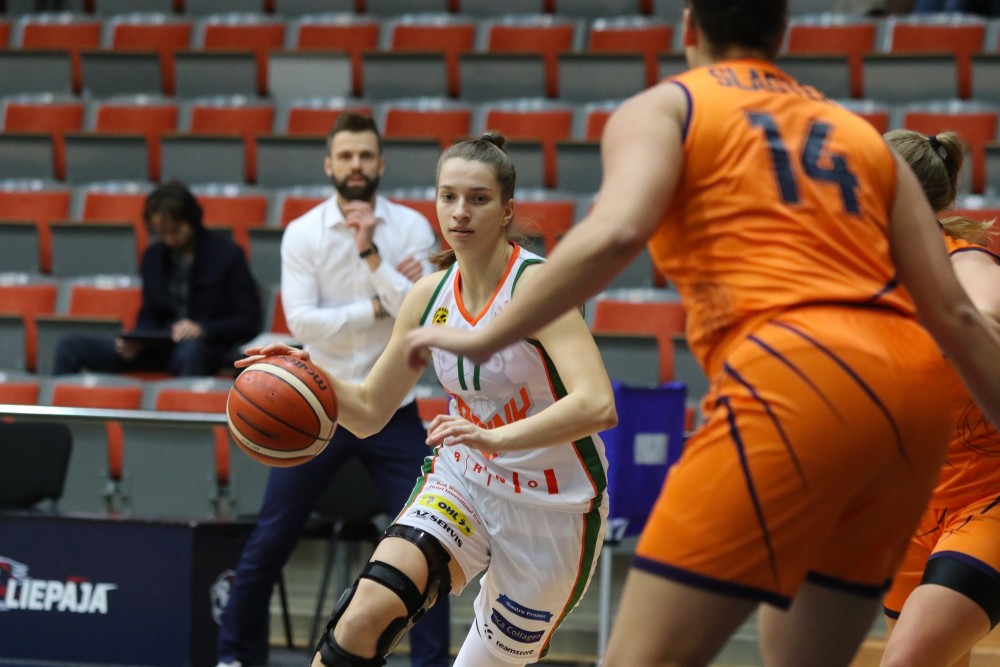 Žabiny Brno have found a lot of success in international play. They start the EWBL playoffs as the top seed from Group A on Thursday. Photo credit: Žabiny Brno.

Žabiny Brno are on a roll. They earned their way to a No. 1 seed in the EWBL by going undefeated in the group phase. Last week, they beat KP Brno in the semifinals of the Czech Cup Final Four and then outlasted Sokol Hradec Kralove in a double-overtime game to win the title.

Last Saturday, they continued moving forward by solidifying their position in the Renomia ŽBL by again beating KP Brno, 55-59, in a road game in Královo Pole.

This week, Žabiny Brno will start the playoff phase of the EWBL season. As the No. 1 seed of Group A, Brno plays the fourth-seed team from Group B: SBŠ Ostrava at home on Thursday at 5:45 p.m. and then again in Ostrava on Sunday at 5 p.m.

In the domestic league, there are three more rounds left in the first phase of the regular season. Perennial champion ZVVZ USK Praha is 15-0. KP Brno and Sokol Hradec Kralove both have 12-3 records. Žabiny Brno and BLK Slavia Praha are both 9-6.

In the Brno rivalry game last Sunday in Královo Pole, Žabiny Brno took a small lead in the second quarter and then maintained it through the defensive second half, when each team could barely clear double-digits in each quarter.

KP Brno, which had won in overtime in Žabovrsky in the previous regular-season meeting between the two Brno teams, was led the 13 points of Michaela Stará.

Since the first match of 2020 — when Brno surprisingly lost, 3-1, at lowly Šternberk on Jan. 4 — Brno has not dropped a set in five matches and it has built an eight-point lead atop the Uniqua Extraliga Ženy standings.

Those five match victories included straight-set wins over top teams, like Přerov on Jan. 23, Olomouc on Jan. 27 and, most recently, Ostrava on Sunday.

The Šelmy now have 58 points in the standings. Olomouc is second with 50 points. Prostějov (41 points) and Ostrava (38) are falling farther back in third and fourth places.

VK Královo Pole has won its past two matches — at home against Liberec on Jan. 25 and at Přerov on Jan. 30. The team is seventh with 22 points.

After beating Zlin in straight sets last Thursday, Volejbal Brno, the men’s volleyball team, has firmly established itself in the top three of the Uniqua Extraliga Muzi.

Brno has 35 points, one behind České Budějovice.

This Saturday, Brno has a big chance to make another move in the standings when they host league-leading Karlovarsko, which has 42 points.

There are six matches left in the regular season.

mmcité1 Basket Brno completed the first phase of the Kooperative NBL regular season on Wednesday night with an 82-98 home-court loss to Kingspan Královští sokoli. Three days later, after the Group A2 schedule was announced, Brno turned the tables and started the next phase of the season with a 76-85 victory against the same team at their home court in Hradec Kralove.

Every win counts because the bottom-of-the-standings team at the end of the Group A2 season will have to fend off regulation to the lower league. Right now Brno is that bottom team.

To the first meeting with Kingspan Královští sokoli: On Wednesday, the first phase of the regular season ended at Campus Square. The game started with a touching tribute to Kobe Bryant, the superstar Los Angeles Lakers player who died in a helicopter crash in Southern California three days earlier. Each team got the ball to observe a moment of silence. Then the crowd and the players applauded Bryant’s storied life and career. The game ended with Brno in last place in the standings with a 3-19 record.

Kingspan Královští sokoli (6-16), NH Ostrava (6-16) and GEOSAN Kolín (4-18) are the other teams in Group A2, where those records are the starting points and where the four teams will play two home and two away games against each other. After 12 rounds, the bottom team will play the top two teams from the lower league for the right to stay among the elite clubs. The top three teams from Group A2 will play for the chance to enter the playoffs with pig-tail series from April 10 to 14. The main playoff bracket is from April 17 to May 30.

In the first Group A2 game, and the second of the week against Kingspan Královští sokoli, Brno played solidly throughout. One difference was Mihkel Kirves, a new player from Estonia, who improved in his second game for Brno, scoring 19 points and grabbing nine rebounds. In his previous game, earlier in the week against Hradec Kralove, he had five points.

Davell Roby was a perfect 15-of-15 from the free-throw line and finished with a game-high 24 points.

mmcité1 Basket Brno will host NH Ostrava this Saturday at 7:30 p.m. in the second game of the Group A2 season.

HC Kometa Brno scored two third-period goals to force overtime. Unfortunately, a minute of extra time was all HC Sparta Praha needed to score the winning goal on Sunday: The game, which was played in front of 14,518 fans in Prague, kept Sparta in fourth place in the Tipsport extraliga with 76 points and left Kometa in sixth place with 70.

Earlier in the week, on Friday, HC Kometa Brno beat BK Mladá Boleslav at home, 2-1, after a shootout.

The next game is at home against HC Vitkovice Ridera next Wednesday at 6 p.m. Then there are a total of nine games left in the regular season.

A connoisseur of the unpredictable and unscripted drama of sports.
View all posts by Bruno Zalubil →
« Police Urge Caution as Brno Sees Three Serious Traffic Accidents in One Morning
Take A Guided Tour Around Brno In English Or German For Just CZK 30 »