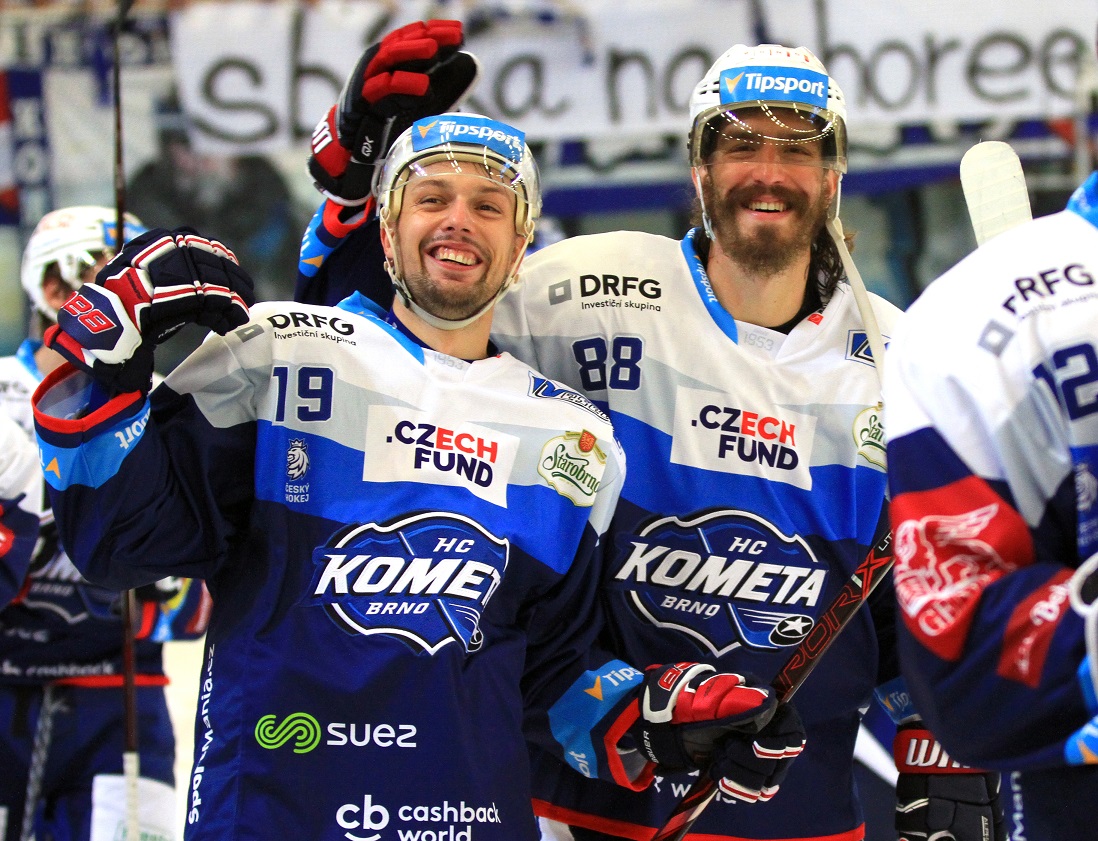 Peter Mueller, right, has returned from an injury and he scored two goals on Sunday. Photo credit: Ivo Dostál.

Most people would say that hockey is the main sport of Brno. It is hard to argue against all of the titles and all of the sold-out games.

The first game is a big one. Tomorrow, longtime rival (and the current league-leading team) HC Sparta Praha will come to DRFG Arena. The puck drops at 5:30 p.m. The game will be broadcast on CT Sport.

HC Vikovice Ridera come to Brno on Saturday at 3 p.m. and HC Energie Karlovy Vary stop by on Monday at 6 p.m.

Kometa will be happy to be home. They finished a series of five road games with two losses last week. Overall, they lost four of the five games.

On Sunday, the team lost at BK Mladá Boleslav, 5-4, when the winning goal was scored in the second minute of extra time.

There were some bright spots. The line of Peter Mueller – Petr Holik – Tomas Vincour accounted for all of the Kometa goals. Mueller had two goals. Vincour had a goal and three assists. And Holik had a goal and two assists.

And all is not yet lost. The team is in seventh place in the Tipsport extraliga standings with 45 points. They are in playoff contention.

After the Mlada Boleslav game, Kometa coach Kamil Pokorný also found some positives: “In the second period, goals started to fall, unfortunately when we scored a goal, the opponent immediately answered. But I have to praise the players, they worked hard. In the overtime we had chances. Boleslav converted its only one. Despite the result, we performed very well.”

The regular season continues until March 6.

League-leading VK Brno fell behind second-place Olomouc before it rallied to win the fourth set and pull away in the fifth. The Šelmy now have a five-point lead in the Uniqua Extraliga Ženy standings.

The top of the standings is beginning to spread out. The VK Brno Šelmy have 43 points. Olomouc has 38. Ostrava is in third with 32. Olymp has 28, Prostějov has 27 and Liberec has 25.

Královo Pole was swept in three sets at Liberec on Saturday. They are in seventh place with 17 points.

After this weekend, the women’s league takes a break until the first week of January. Both local teams start up again on Jan. 4. The Šelmy play at Šternberk at 5 p.m. and Královo Pole hosts Olomouc at 6 p.m.

Volejbal Brno maintained its position in the top teir of the Uniqua Extraliga Muzi standings when it beat Beskydy, three sets to one, at home on Saturday.

Through 12 rounds, the local men’s team is tied for third place with Liberec and Praha at 24 points, although it is officially listed as fifth due to tiebreakers. Nevertheless, with a break for the holidays, Brno is six points behind league-leader Karlovarkso (30 points) and second-place České Budějovice (26).

The season will resume with Brno at Kladno on Jan. 13 in a match that will be nationally televised. Two days later, Brno hosts Liberec at 5 p.m. on Jan. 15.

After rebooting its Kooperative NBL season with two wins, mmcité1 Basket Brno showed more signs that it is a changed team when it took third-place Dekstone Tuři Svitavy to the buzzer on Saturday evening.

Brno, which started the league season with 13 straight losses, beat USK Praha and BK JIP Pardubice and then lost to Svitavy during a series of three home games.

Throughout the Svitavy game, Brno had spurts of excellent play, particularly in the first quarter as they built a 26-13 lead. At the end of the half, Svitavy hit a late 3-pointer to cut the lead to just two, 42-40. In the third quarter, it was Brno’s turn to fall back and rally against Svitavy’s relentlessness and back class.

As the game entered the final quarter, Brno was down by one but both centers were hampered with four personal fouls. Lukas Stegbauer hit two 3-pointers to get Brno back into the lead. Aggressive defense set the tone for an exciting finish.

Two-thirds of the way into the final frame, both centers had fouled out, including Jakub Jokl, who appeared to clearly have established his position in the paint, with 2:53 remaining. This same situation would come up later, and again work against Brno.

With no true center, Davell Roby took over the Brno offense and scored 11 straight points. He scored five times: driving the lane, getting fouled while making his shot and hitting the plus-one to make the score 74-73 with just more than 2½ minutes left; making two powerful low post moves for either side of the key on successive possessions; driving the lane for a short-range basket; and then completing a fastbreak by pulling up for a jumper at the top of the key. Roby finished with a game-high 19 points.

With 6.5 seconds left, Brno had an 82-81 lead. Svitavy came out of a time out and got the ball to Eugene Crandall. He drove into the lane and the Brno defense formed a wall around him. Bryan Smithson, Zdeněk Nehyba and Roby all had their and arms in the air. Smithson got called for the foul that could just as easily have been a non-call. Crandall hit both free throws.

Brno called a timeout, down by one.

With 2.3 seconds left, Radek Farský tried to get the ball in to Roby. Crandall intercepted the ball and immediately stepped out of bounds — all in 2.3 seconds. The final buzzer sounded and Brno did not get another shot at its third consecutive victory.

“What I want to praise, and I am happy to praise this, is the performance of my team,” said Brno head coach Lubomír Růžička. “The boys fought and worked. If we work like this, it will be good. I believe we will achieve our goals.”

Stegbauer finished with 16 points. Smithson had 13.

A connoisseur of the unpredictable and unscripted drama of sports.
View all posts by Bruno Zalubil →
« Lidická Case Closed: Main Suspect To Be Extradited from CR for 18 Months
Czech Your Basics »