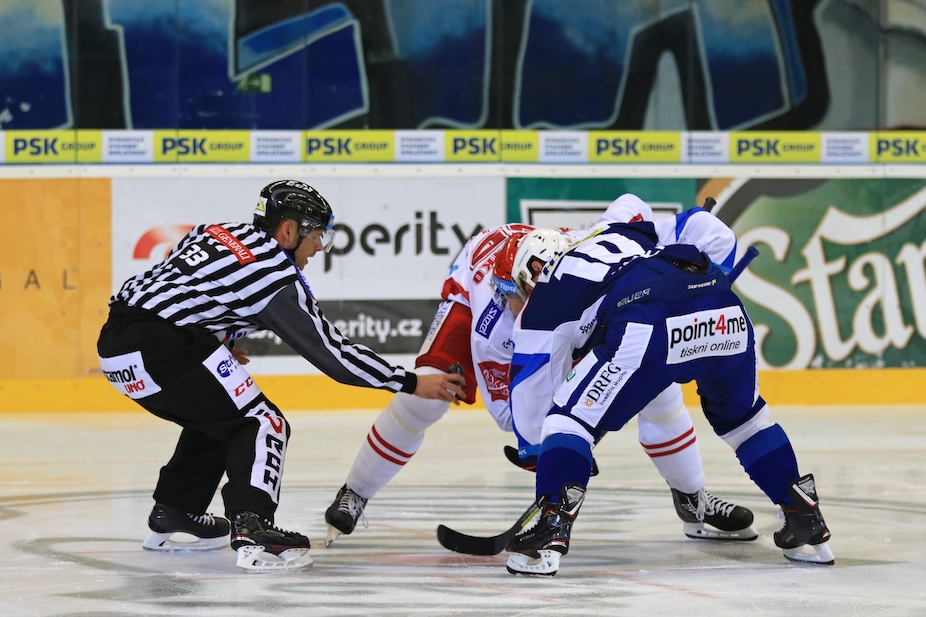 Jaromír Jágr played most of his legendary career far away from the Czech Republic, but this Sunday, he will lead Rytíři Kladno to DRFG Arena. Photo credit: HC Kometa.

Brno, Nov 27 (BD) — Both local women’s basketball teams resume season with wins to prepare for international games; mmcité1 Basket Brno finishes first run through league without a win; Zbrojovka will winter in third place after big win at Pardubice; and the Brno sports results and schedule.

Last week, HC Kometa, as its website proclaimed, ended its “black series” when captain Martin Zaťovič scored in extra time to beat Mountfield HK. The 3-2 victory was worth two points because Brno lost the lead in the final minute of regular time when Hradec Kralove pulled their goal tender for a six-to-four advantage.

Nevertheless, the extra time goal ended a six-game losing streak during which the defense gave up 30 goals.

That symbolic success is important because the team will be on national television on Sunday when hockey legend Jaromír Jágr, perhaps the most famous athlete every produced by this country, will come to town. Jágr is finishing up his career with Rytíři Kladno. The game starts at 5:20 p.m.

Last night, on Tuesday, Brno got three points in the standings when they beat HC Olomouc, 4-3, and moved into the sixth place.

Libor Zábranský, the Brno native who played in the NHL, played on the Czech national team, and returned HC Kometa to prominence, has now earned five points in the three games since he resumed the title of head coach.

Kometa go to Bílí Tygři Liberec on Friday for a 6 p.m. game.

Both KP Brno and Žabiny Brno returned from a two-week break with powerful performances that suggest that they are primed and ready for more success in the second part of the regular season.

They both have international games this week.

Žabiny Brno hosts Spirou Ladies Charleroi in a CEWL game tonight at 6 p.m. KP Brno has traveled to Turkey. They play in Ankara against Botas tomorrow in a EuroCup Group game.

KP Brno (7-2) is in third place in the Renomia ŽBL. They have consecutive home games against Loko Trutnov on Sunday at 3:30 p.m. and against Sokol Hradec Králové on Dec. 7 at 3:30 p.m.

Žabiny Brno is fourth in the league. Their next league game is at ZVVZ USK Praha on Dec. 7 at 5 p.m.

mmcité1 Basket Brno had another shot at the buzzer for victory — its third of the first half of the season — but the ball banged off the side of the rim and the Brno men’s basketball team failed to win a game in the first run through the Kooperative NBL 2019-20 season.

“This was a cruel game because we gave it our all,” said head coach Lubomír Růžička. “It is a shame. I think it shows that we are alive, that we are breathing. We are just missing some quality and some athleticism. That is sport. It is just not working for us to break away (from our losing streak).”

Brno had season bests from three players: Radek Farsky led Brno with 22 points by going 3-for-3 from 2-point range and 5-for-10 from 3-point range; Lukáš Stegbauer had 17 points; and Jakub Jokl, the 208cm post, had season highs with 12 points and eight rebounds.

Interestingly, Davell Roby, who played for Brno last season, also appeared on the court. It was his first game of the season and he got a lot of playing time. Last year he averaged 12 points a game and contributed on the defensive side of the ball.

The remaining 11 rounds of the first part of the regular season will have another game against every team in the league. The top teams will earn a berth in Group A1, like Brno did last year, and then the postseason. The teams who are lower in the standings will play each other in Group A2, where they risk relegation to a lower league.

FC Zbrojovka made an important statement on Saturday morning: We want back want back into the top league.

Brno travelled to Fortuna:Nadordni Liga-leading Pardubice and rallied for the victory, 1-2.

Jakub Přichystal had first-half goals to tie score and then give Brno the lead that they would not relinquish in the second half. The goals were the first to be scored this season at Pardubice’s home field.

Zbrojovka is squarely in the middle of the main fight for promotion to the Fortuna Liga.

FK Pardubice (11-2-3, 35 points) is atop the standings, despite one loss and one tie from the two games against Zbrojovka. FC Vysočina Jihlava (9-5-2, 32 points), with whom Zbrojovka has battled so often in both the first and second leagues, is second.

For what it is worth, Zbrojovka’s remaining schedule is advantageous because it brings most of the top teams to Brno: Dukla Praha on March 20; Jihlava on April 19; and Žižkov on May 8.

SK Líšeň finished its fall campaign a week early. Líšeň is 6-5-5 with 23 points and in the upper half of the standings in eighth place.

https://brnodaily.cz/2019/11/27/sport/brno-sports-weekly-report-legend-jaromir-jagr-comes-to-town-sunday/https://brnodaily.cz/wp-content/uploads/2019/11/Kometa271119.jpghttps://brnodaily.cz/wp-content/uploads/2019/11/Kometa271119-150x100.jpg2019-11-27T10:15:37+01:00Bruno ZalubilSportBasketball,Brno,Czech Republic,Kometa,SportJaromír Jágr played most of his legendary career far away from the Czech Republic, but this Sunday, he will lead Rytíři Kladno to DRFG Arena. Photo credit: HC Kometa. Brno, Nov 27 (BD) — Both local women’s basketball teams resume season with wins to prepare for international games; mmcité1 Basket...Bruno ZalubilBruno Zalubilbzalubil@hotmail.comAuthorA connoisseur of the unpredictable and unscripted drama of sports.Brno Daily

A connoisseur of the unpredictable and unscripted drama of sports.
View all posts by Bruno Zalubil →
« Drunk Woman Accidentally Enters Strangers’ Flat and Comforts Their Child
MittelCinemaFest 2019: Festival Of Italian Cinema Comes To Kino Art »