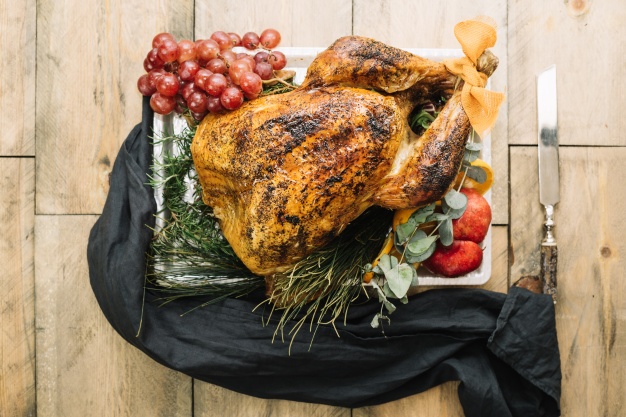 As a teacher of English here in the Czech Republic, I have talked about Thanksgiving, the American holiday, countless times.

Here are some facts: Fourth Thursday of November. Roast turkey, yams, gravy, stuffing. Family get-together. American Football. The next day is Black Friday. A few days later is Cyber Monday. It is all an important part of American culture.

This is important for my high school students because they might draw “Holidays in English-speaking Countries” during their graduation exam — which is also known as the most stressful test of their young lives — so they’d better be prepared to talk turkey.

That is why, this week, I will talk about Thanksgiving with my students.

They always want personal stories, so I will tell them about my family back home in the U.S.: My mother usually serves a 20-pound turkey, which is about 9 kilograms. She is Czech, so she will make sauerkraut (zeli) and dumplings (knedlíky) in addition to the American fare, which includes mashed potatoes, sweet potato pie and a bean casserole (which must be new because I don’t remember ever having eaten it).

The inevitable question that I will get is: just how big are ovens in America?

More generally, Thanksgiving has a lot of interesting aspects. It is a non-denominational holiday, which means that people of all religions gather together much more than during Christmas, Passover or Easter. Of course, politics always seems to come up, especially when an uncle or a grandmother (or both) get a bit too much alcohol into them.

For the record, the ovens are not that much bigger in America. The birds may weigh more, but the meat is spread evenly around their bodies. It is a tasty meal and pretty easy to cook. If you have the frozen ball that is common in the United States (and which is now available in Makro and Tesco and other local supermarkets), then you end up with about 95 percent meat and leftovers for several days.

If you’re interested, don’t be afraid to cook one. There are plenty of recipes and YouTube videos online. It is hard to screw up. Just remember to baste it often so that the meat doesn’t dry out. And, if you’ve never eaten one, it would be worth the experience.

Here are some other fun facts that I share with my students (with the belief that, if you make something interesting, then you make it memorable):

Of all of the maturita graduation tests in which I have taken part, no student has ever had trouble with describing Thanksgiving. Maybe strange stories are memorable, although I have had more than a few students recite that the men watch American Football and the women cook the turkey.

Sometimes a joke (read: the truth) has a way of being remembered.

https://brnodaily.cz/2019/11/23/column/bruno-teaching-turkey/https://brnodaily.cz/wp-content/uploads/2019/11/thanksgiving-turkey_23-2147709471.jpghttps://brnodaily.cz/wp-content/uploads/2019/11/thanksgiving-turkey_23-2147709471-150x100.jpg2019-11-23T13:45:08+01:00Bruno ZalubilColumnBrno,Brno Expats,Food,NewsPhoto credit: Stock picture / Freepik. As a teacher of English here in the Czech Republic, I have talked about Thanksgiving, the American holiday, countless times. Here are some facts: Fourth Thursday of November. Roast turkey, yams, gravy, stuffing. Family get-together. American Football. The next day is Black Friday. A few days later...Bruno ZalubilBruno Zalubilbzalubil@hotmail.comAuthorA connoisseur of the unpredictable and unscripted drama of sports.Brno Daily

A connoisseur of the unpredictable and unscripted drama of sports.
View all posts by Bruno Zalubil →
« Is Same-Sex Marriage Coming To The Czech Republic?
What’s Up Brno? – Events in Brno, Week n°48 »