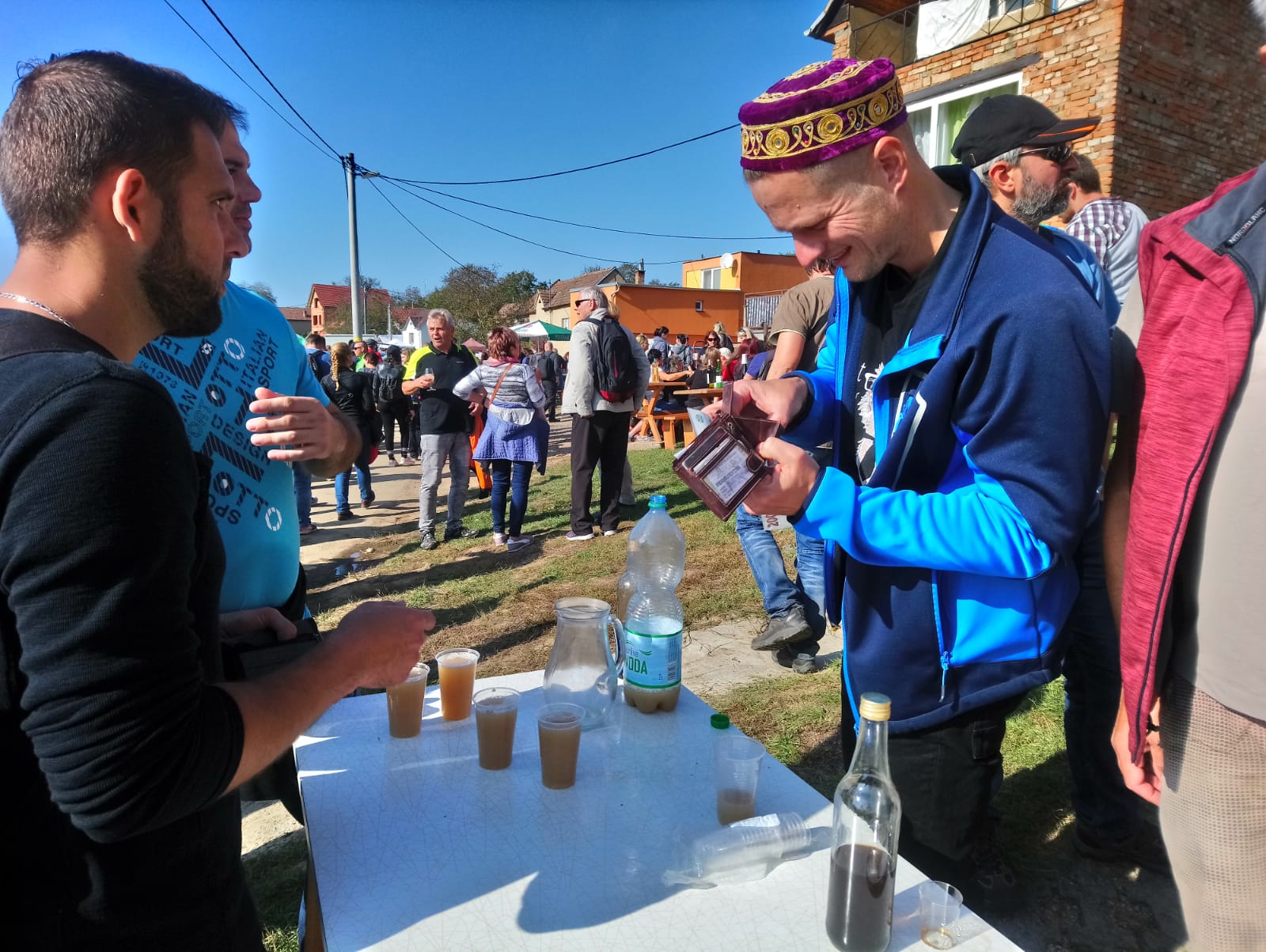 Every year on the second Saturday in October between Mutěnice and Milotice you will find thousands of Czechs doing what they love – walking and drinking; it’s the Burčák walk. Photo credits Vicky Kurylak and Charles du Parc.

Brno, Oct 28 (BD) – Burčák, if you haven’t already discovered it, is the delicious but dangerous, partially fermented wine that is on sale everywhere around Brno from late August till November. Although it tastes just like fruit juice it can be up to 7 percent alcohol.

Mutěnice is a great starting  point as the transport links are strengthened just for the day and the journey from Brno takes around an hour and a quarter. We set out from the station to run the gauntlet of many Burčák sellers.  We managed to avoid the first few only to be tempted by a guy who looked like he was offering homemade slivovice from his living room. This was exceptionally good, very smooth and not at all fiery – definitely a good start to the day. We worked our way through the village sampling a very fresh and fruity Frankovka burčák and one or two whites. You really need to limit yourself in Mutěnice; if you do the full route to Milotice, there is another 15km and countless opportunities to sample the delightful produce  of the vinyards. Housed in many lovingly decorated buildings,  the wine cellars are archetypical South Moravia and the whole village evokes tradition. In Mutěnice, you also find bigger, more commercial wine cellars where you can also stay overnight.

After climbing through the village for a few hundred metres you break out into a landscape of growing vines and a feeling of space. The views of the surrounding landscape get better and better until you reach Vyšicko. There is a lookout tower but as there are no trees, you get a fine view without queueing to climb the tower. The next part of the route is the most crowded with people moving in both directions. The next focal point is Pod Dubňanskou horou, where you will find a stage with live music and more of a party atmosphere. This is the start of a whole ‘street’ of over a hundred, mostly family owned, wine cellars.

We were searching for the wine cellar of Jiří Hofman, who with his father were offering their homemade Burčák and pork from a roasting pig. Somewhat incongruously wearing a Turkish style hat, Jiří first offered us some shots of their excellent homemade ořechovice, a spirit made from walnuts. You could really get the flavour of walnuts and it slid down with great ease leaving a pleasant aftertaste. The Hofmans are typical of the many family vineyard owners in this area; you won’t find their produce in any shop; they produce wine just for their own consumption and a few privileged friends. Curiously, the next door cellar was attracting an ever increasing crowd for no obvious reason. Jiří explained that it was for the ‘orloj’. Every hour, the owners give a somewhat satirical performance by appearing at the first floor window of the cellar dressed in various costumes with some current relevance; this time there was a guest appearance by ‘Ester Ledecká’, the famous skier and snowboarder.

Although the day is mostly about drinking, there is no shortage of food on offer. Think sausage, big slabs of pork, and chunks of bread slathered with pork fat. However, amongst the meatfest there were also bramborák (potato pancakes) and langoš (deep fried batter), and even some more unusual morsels for vegetarians such as pumpkin pate. It seems that everyone who can turn their hand to producing some food suitable for ‘on the hoof’ eating puts out a table and makes a few extra crowns.

After Dubňany, the wine cellars thin out. And you can see the evidence that many people had started out earlier than us (the advertised start is 8am). Grassy banks were covered with people lying flat out and ‘taking a breather’ and some groups  of walkers had to support members who were finding it a challenge to keep upright.

For us, the further few kilometres to Milotice seemed a step too far.We headed for the bus stop we could see at the end of the path only to find it was only served Monday to Friday. It seemed hard to decipher  which would be the nearest bus stop at which a bus was likely to stop, so we resorted to a taxi to take us back to Mutěnice. Although we expected to catch a train at 5pm to Hodonín, this was nowhere to be seen and the harassed České dráhy staff had no idea about its likely appearance. So, along with hundreds of others, we got on the first train to arrive, which eventually got us back to Brno without further problems.

https://brnodaily.cz/2019/10/28/travel-tips/burcakovy-pochod-or-the-march-to-oblivion/https://brnodaily.cz/wp-content/uploads/2019/10/burcakovy-pochod-czech-republic-2019-1024x770.jpeghttps://brnodaily.cz/wp-content/uploads/2019/10/burcakovy-pochod-czech-republic-2019-150x113.jpeg2019-10-28T18:24:18+01:00Charles du ParcTravelBrno,Brno Expats,Burcak,Czech Republic,English-friendly,Expats Czechia,Food,WineEvery year on the second Saturday in October between Mutěnice and Milotice you will find thousands of Czechs doing what they love - walking and drinking; it's the Burčák walk. Photo credits Vicky Kurylak and Charles du Parc. Brno, Oct 28 (BD) - Burčák, if you haven’t already discovered it, is...Charles du ParcCharles du Parcchaduparc@gmail.comAuthorCharles du Parc comes originally from London and worked there in fashion retailing for several years. Before coming to the Czech Republic in 2005, he ran his own delicatessen and café in a small town on the south coast of England. He has also served as a judge for the World Cheese Awards. Having fallen in love with Brno,he now regards it as home and works there as a freelance teacher, writer and translator.Brno Daily

Charles du Parc comes originally from London and worked there in fashion retailing for several years. Before coming to the Czech Republic in 2005, he ran his own delicatessen and café in a small town on the south coast of England. He has also served as a judge for the World Cheese Awards. Having fallen in love with Brno,he now regards it as home and works there as a freelance teacher, writer and translator.
View all posts by Charles du Parc →
« What’s Up Brno? – Events in Brno, Week n°44
Brno-Střed District Council Proposes Barring Trams From The Pedestrianized City Centre »