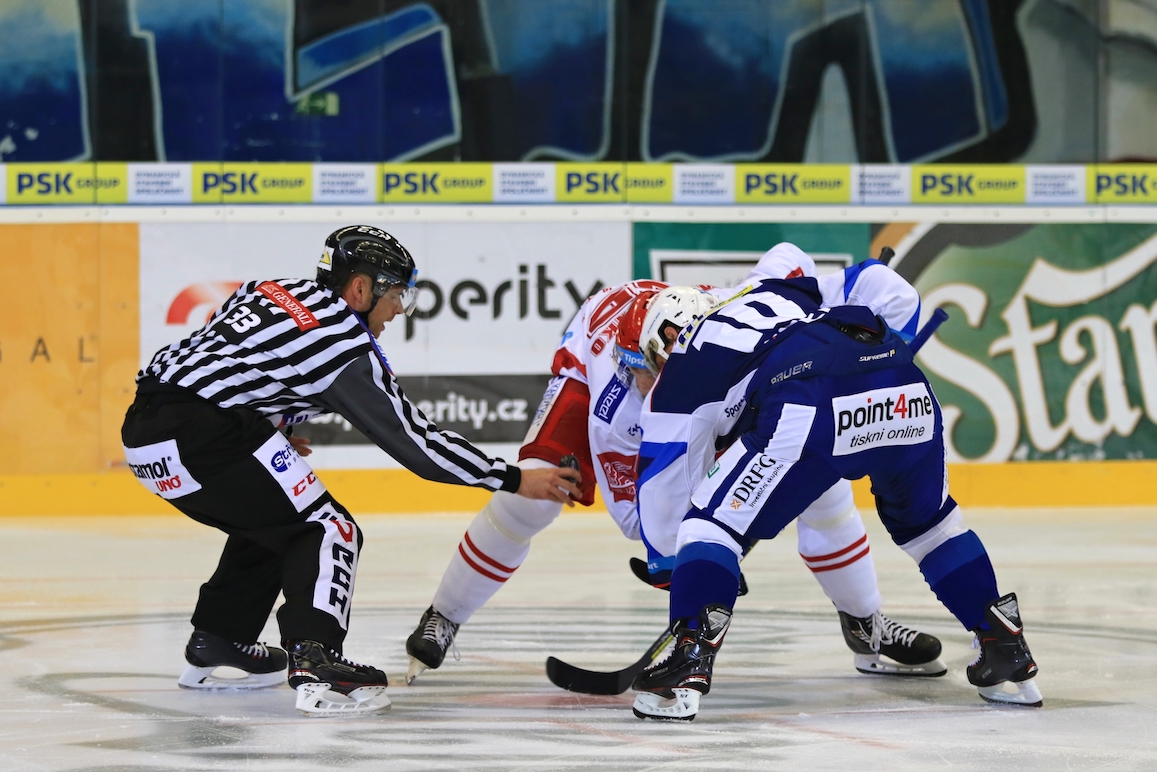 Kometa has surged to the top of the Tipsport extraliga with 24 points from eight wins in nine games. Photo credit: HC Kometa.

HC Kometa Brno has moved into first place after beating HC Škoda Plzeň, 3-1, on Saturday and then traveling to Bohemia to beat Jaromir Jagr and Rytíři Kladno, 2-3, on Tuesday to win a fourth game in a row.

The team had a four-game winning streak before an uncharacteristic 0-7 loss at home to regional rival Zlín on Oct. 6. Otherwise, from Sept. 22 to Oct. 22, Kometa has earned 24 points with eight wins in nine games.

The run has put them at the top of the Tipsport extraliga standings with 27 points. They have two games in hand to second-place Třinec (25 points).

Kometa came back from a 0-2 first period deficit against Kladno. They will try to extend their current streak with two home games: HC Dynamo Pardubice on Friday at 6 p.m. and HC Verva Litvínov on Sunday at 5 p.m.

In the most pressure-packed moments of the rivalry matchup between KP Brno and Žabiny Brno, Veronika Remenárová tried to put up a 3-point shot to beat the shot-clock buzzer. It was blocked easily and dramatically by Žabiny’s Jusinta Matuzonyté.

That was the beginning of overtime. There was still a lot of game left.

Remenárová got another chance at a 3-ball. She hit it. Later, she got to the line and sank a free throw. Then, with 48 seconds on the clock, Remenárová came through again, this time breaking through a foul to score a field goal and adding the free throw to complete a 3-point play in order to, effectively, ice the game — a 73-83 KP Brno overtime victory in Žabovřesky on Sunday.

The loss snapped a six-game winning streak for Žabiny Brno, which included three EWBL games and a CEWL game.

Remenárová, who scored seven of her 11 points in overtime, was but one of the stars for KP Brno (5-1 in the Renomia ŽBL this season). Michaela Stará also had seven points to help the scoring spurt in overtime. She finished with 14 for the game. Gabrielle Green proved to be a constant force on both sides of the ball.

Green came off the bench late in the first quarter and made an immediate impact. To begin the second quarter, she made three steals to help KP Brno rebound from a slow start and begin to establish a strong defense.

“We had a team meeting and we watched video and talked about the defense in the game against Gorzów (POL) where we lost by 36 points,” Medvecký said, referring to the EuroCup game that KP Brno lost 93-57 last Thursday. “I said that if we do that again it’s our death. Maybe (Green) understood my English.”

Green finished the game with eight steals, and disrupted the Žabiny Brno offense at least four additional times. The rest of her statistics were just as impressive: nine assists, eight rebounds and 14 points. She drew six fouls and committed only one.

“I love getting steals,” Green said. “It’s part of my game — anticipating where the ball is going to go and getting it.”

The next Battle of Brno is scheduled for Feb. 1 in Kralovo Pole.

Tonight, KP Brno will host Botas (TUR) in a EuroCup game at 6 p.m. Before tipoff, Edita Šujanová, who retired after last season, will be honored for her long and successful career, which started and ended in Kralovo Pole.

FC Zbrojovka Brno scored three goals in a 12-minute stretch during the first half on Friday night and beat visiting FK Vanrsdorf, 4-1.

It was the head coaching premier for Miloslav Machalek, who replaced Pavel Šustr two weeks earlier.

Jakub Přichystal, a 23-year-old who played for Machalek in Líšeň last season, scored in the 30th and 84th minutes. Antonin Růsek had a goal in the 35th minute. Ondřej Vaněk converted a penalty kid just before halftime; he now has three goals and three assists in five games.

In the past three games, two under Sustr and one under Machalek, Zbrojovka has outscored its opponents 10-3. Overall, Zbrojovka is second in the league with 24 goals scored and fourth in the league

Zbrojovka is now in fifth place in the Fortuna:Narodni Liga with a record of 6-4-2 from 12 matches.

Zbrojovka plays at FK Viktoria Žižkov in Prague on Saturday at 1 p.m. There are four games left in the fall half of the season. After Žižkov, Zbrojovka hosts Vyšehrad on Nov. 1 and Prostějov on Nov. 8, and then travels to Pardubice on Nov. 23. The spring season begins in early March.

Robert Kafka and Milan Valachovič, the new coaches for SK Líšeň, made a winning debut with a 1-2 victory at FK Banik Sokolov on Saturday.

Líšeň was down by a goal at halftime. Then, Jan Hladik converted a penalty kick and, in the 61st minute, Martin Zikl scored the winning goal.

Líšeň is in the middle of the league standings with a record of 4-4-4 for 16 points.

Lokomotiva Brno-Horní Heršpice has won the Moravian series (so far). The women’s football team from south Brno opened the season with a victory over 1. FC Slovácko in Uherské Hradiště and they rallied from behind to get a point in a 1-1 game in Horní Heršpice on Saturday.

That means that Lokomotiva has a 3-1 lead in the first games of the Battle of Moravia, although there is a possibility for more games later in the season.

This game, as befitting a rivalry, was tightly contested in the first half. Both teams fought for control of the midfield and earned some decent scoring opportunities. The intensity was palpable. Even the head coaches were sniping at each other.

Just minutes before halftime, Slovácko’s Kristýna Příkaská took a shot from the corner of the penalty box and lofted the ball just over the Lokomotiva goalkeeper’s hands.

Halftime seemed to change the balance. Slovácko maintained control of the ball and stayed on offense.

Eventually, Lokomotiva got the ball down to the Slovácko goal and earned a corner kick. Nikol Chlápková headed the ball across the goal mouth and off the post. Lucie Lišková was in the right place at the right time to put the rebound into the goal.

Lokomotiva has another game this weekend. FK Pardubice (1-0-7), the last team in the standings, comes to town on Saturday at 11 a.m.

Then, there are two more games in the first half of the season. Lokomotiva will go to Dukla Praha on Nov. 2 and host FC Viktoria Plzeň on Nov. 16. The season resumes in February.

Three teams have failed to win a game in the Kooperative extraliga through four rounds so far this season. Two of the teams will meet on Saturday at Campus Square at 7:30 p.m.: mmcité1 Basket Brno will host GEOSAN Kolín.

This game will be the first in Brno for a new player: Pape Diatta. The Senegalese forward scored 12 points in Svitavy while wearing the jersey of Richard Körner. Körner, one of the highly touted new players when the season began earlier this month, has apparently left the team for BK Inter Bratislava, where he has already appeared in a game.

A connoisseur of the unpredictable and unscripted drama of sports.
View all posts by Bruno Zalubil →
« Reality Check: What’s Going On At The Immigration Office on Hněvkovského?
Nine Practical Tips For Your First Month In Brno »