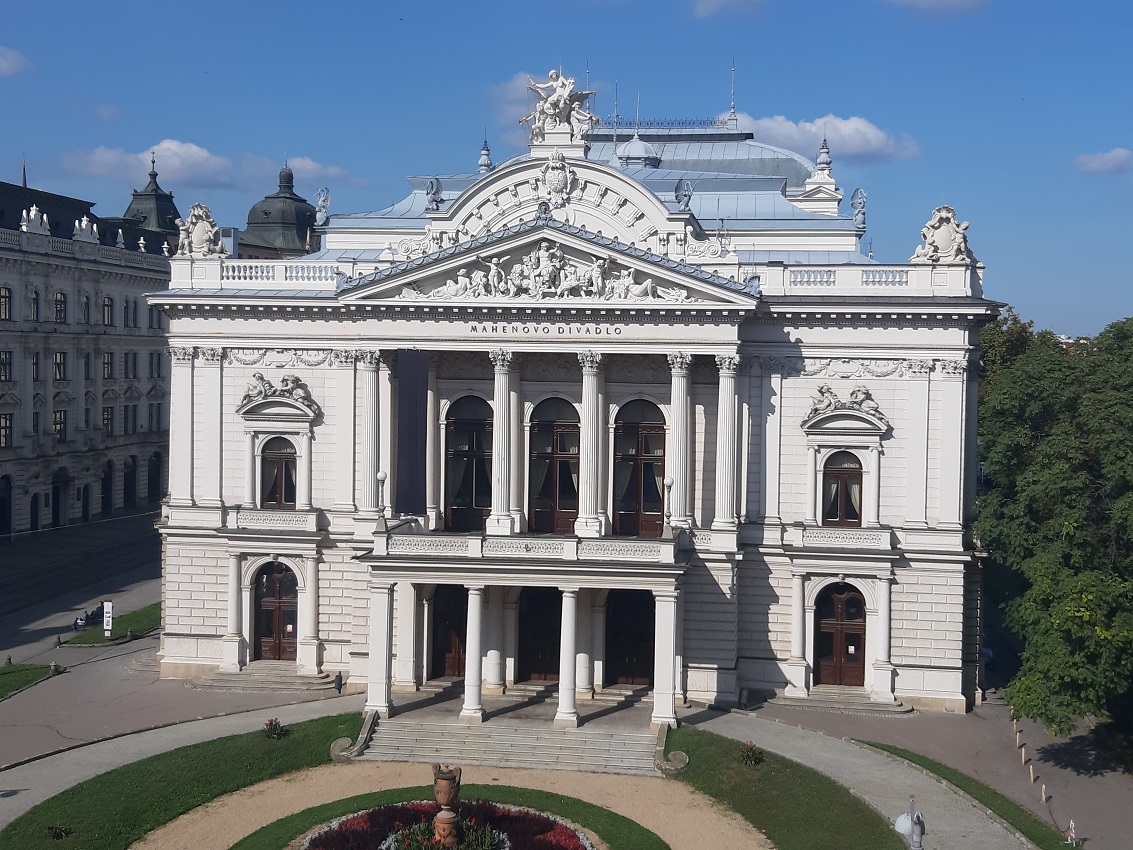 Black flags are flying outside the Mahen Theatre today in honour of the legendary Czech theatre and film actress Vlasta Chramostová, who died yesterday at the age of 92. Photo: KK / Brno Daily.

Brno, Oct 7 (BD) – Chramostová starred in 35 films in a career beginning in 1949. She trained at the Brno State Conservatory and spent four years with the National Theatre Company in Brno before moving to Prague to join the Vinohrady Theatre, where she would remain for most of the rest of her career. Her early career brought much critical acclaim; she starred in Martin Frič’s 1950 film “The Trap”, which was entered into the Cannes Film Festival, and in 1965 she was awarded the title of National Artist.

However, similar to many Czech cultural figures, 1968 changed her life forever. As a prominent public opponent of the Russian occupation of Czechoslovakia, she was effectively blacklisted and frozen out of Czech public life. Her appearance that year in Juraj Herz’s spectacular classic of Czech horror, “The Cremator”, would prove to be her last in a feature film for almost 30 years.

Chramostová and her husband Stanislav Milota remained active in dissident politics, helping to circulate samizdat publications and setting up a resistance theatre in their home. Chramostová was among the first signatories of Charter 77, the anti-Communist civic initiative which began in 1976. While continuing to be active in the resistance, the couple supported themselves by making and selling lamps.

After the Velvet Revolution, Chramostová returned to the National Theatre in Prague. In 1998 President Václav Havel awarded her the Order of TG Masaryk III. Class for her contributions to democracy and human rights. In 2015 she received an honorary doctorate from JAMU, the music conservatory in Brno, and last year she was inducted into the National Theatre Hall of Fame. She died on Sunday, aged 92, and her death was announced by Tomáš Staněk, spokesman for the National Theatre.

https://brnodaily.cz/2019/10/07/news/vlasta-chramostova-brno-born-actress-and-dissident-dies-aged-92/https://brnodaily.cz/wp-content/uploads/2019/10/mahen-theater-black-flag-1024x768.jpghttps://brnodaily.cz/wp-content/uploads/2019/10/mahen-theater-black-flag-150x113.jpg2019-10-07T12:49:10+02:00Jack StephensCzech Republic / WorldBrno,Famous People,HistoryBlack flags are flying outside the Mahen Theatre today in honour of the legendary Czech theatre and film actress Vlasta Chramostová, who died yesterday at the age of 92. Photo: KK / Brno Daily. Brno, Oct 7 (BD) - Chramostová starred in 35 films in a career beginning in 1949....Jack Stephens jack.stephens50@gmail.comAuthorA writer and English teacher originally from London who has lived in Brno since 2011, interested in politics, low culture, and all things strange and/or Czech.Brno Daily

A writer and English teacher originally from London who has lived in Brno since 2011, interested in politics, low culture, and all things strange and/or Czech.
View all posts by Jack Stephens →
« Summary of 2019 Changes To Czech Immigration Law
“Moravian Autumn” Festival Presents The Complete Sonatas of Mieczysław Weinberg »