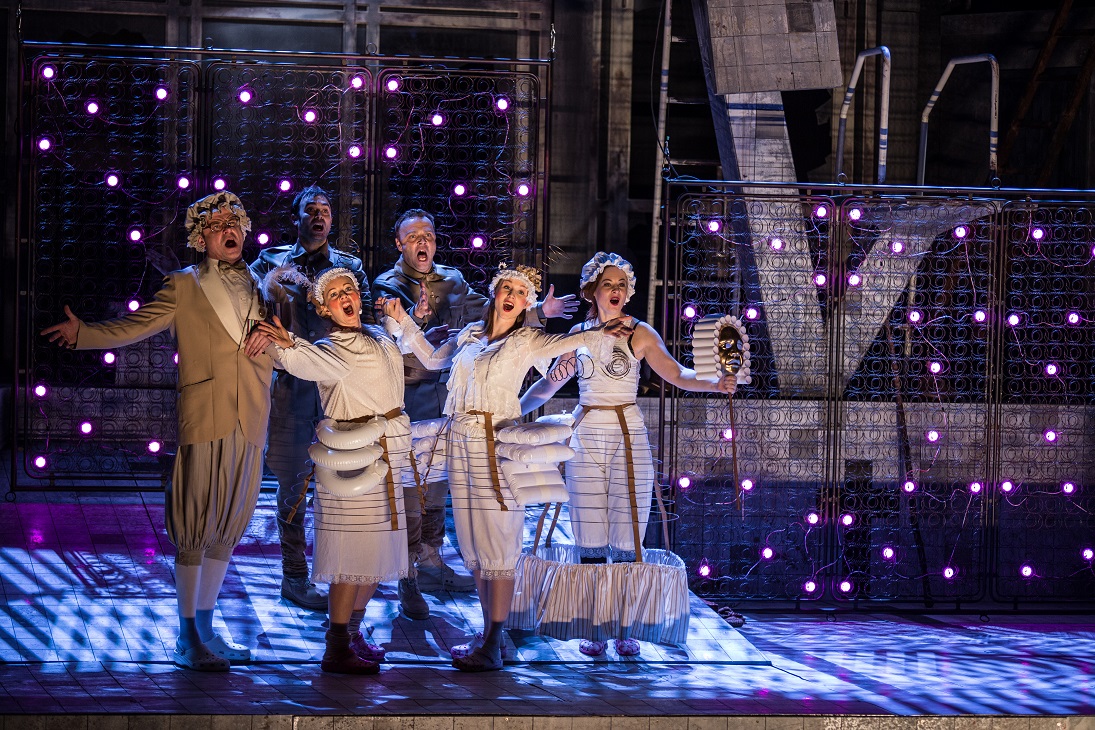 After the theatre holidays, the three theatre houses of the National Theater in Brno (NdB) open their doors again for both Czech and international theatre-goers. In September, the drama house of NdB will be staging three popular performances with English subtitles at its home at Mahen Theatre. Opera will include the premiere of The Tales of Hoffmann – Opéra Fantastique by Jacques Offenbach. Ballet will open the first month of autumn with two shows under the stars and amaze us with the timeless love story Swan Lake. And it all will kick off in spectacular style with a free concert on the piazzetta of Janáček Theater, featuring “samples to taste the best of the upcoming season.” Photo: Night of Fools, courtesy of NdB.

Brno, Aug 31 (BD) – Mahen Theatre’s renovation will continue in the new season. The exterior of the 1882 neoclassical building is currently being revamped; in the future the interior of the iconic Brno theatre house will also undergo renovation work, according to Martin Glaser, head of NdB. In 2019/2020 the work will not interfere with the theatre production. A new client center in Janáček Theatre, with an entrance on Rooseveltova, will open in September.

Season Launch – Free concert on the Piazzetta of Janáček Theater

In a fantastic opening to the new season, a large concert will be staged in front of Janáček Theatre on September 6 to launch the new season at NdB. The show will feature “samples” of all the upcoming premieres and shows you can expect to see in the 2019/2020 season, performed by Václava Krejčí Housková, Jana Šrejma Kačírková, Pavla Vykopalová, Adria Široká, Jiří Sulženka, Roman Hoza, Ondřej Kopík and other soloists from Janáček’s NdB Opera.

The heads of NdB and the NdB drama, opera and ballet houses will welcome the spectators. The opera choir will also be present, accompanied by the Janáček Opera Orchestra of the NdB under the baton of Chief Conductor Marko Ivanović.

Entry is free, and the concert starts at 6pm. Our editor Bruno describes his experience with opera in his column “Br(u)no: Continuing the Evolution of Musical Taste” (Saturday 31/8). The event on the piazzetta will start at 11am with a fashion market.

On September 19, there is a production of The King’s Speech, which depicts a difficult stage in the life of the future King of England, George VI, played by stuttering Martin Sláma. His speech therapist is Ladislav Frej, the star of Czech theatre and film.

The next day, we will visit Paris and witness the tender moment when mime artist Jean-Baptiste Debureau meets Garance, the love of his life. This adaptation of the famous French film “Children of Paradise”, based on the script by Jacques Prévert, is an epic love story full of intrigue and jealousy. This production of the show, entitled “Milenci nebes”, takes place on September 20.

On September 22, the tone changes completely for the riotous laughter of the very well-received Australian comedy Night of Fools (“Cosí”) set in a madhouse with a group of crazy patients trying to play theatre – or rather, trying to play Italian opera. How will they eventually manage it?

September premiere – The Tales of Hoffmann

“Love is a flame which burns in one’s eyes, love is a sea of tears one must cry…”

Only the prologue and epilogue, where the poet Hoffmann, in love with the singer Stella, entertains the guests at a pub is real. Nobody knows whether the stories of the three women he loved are true, or if they are just the mind of the poet escaping into a world of bizarre fantasy…

The librettist Jules Barbier was inspired by the characters and tales of poet and composer E.T.A. Hoffmann, one of the first exponents of romanticism, to write a play with the same name, in collaboration with Michel Carré.

French composer J. Offenbach is connected mainly with the operetta genre, though he also created two operas, The Rhine Nixies and The Tales of Hoffmann, neither of which he managed to complete, though they are still popular in the opera repertoire.

In the Tales of Hoffmann, Offenbach did not completely reject all influences from the world of operetta, but the extensive lyrical parts and sophisticated dramatic passages rank this work alongside that of authors such as Gounod and Bizet.

The new NdB production will be the first collaboration of the directorial duo SKUTR, known for their creative and imaginative approach, with the Brno Opera ensemble. The main character will be portrayed by Italian tenor Luciano Mastro (photo above).

The Tales of Hoffmann (French: “Les contes d’Hoffmann”), subtitled Opéra Fantastique by Jacques Offenbach, will premiere on September 20 at Janáček theater, performed in the original French language with Czech and English subtitles.

Libiam ne’ lieti calici – or for those of you who don’t speak Italian or Opera: “Let’s drink from our joyful chalices!”. The summer season of “Opera na Špilberku” will close with the famous works of Giuseppe Verdi: Nabucco, the opera piece about the journey of the Jewish people to freedom, with Luis Cansino, A. L. Bogza, and Jiří Sulženko in the lead roles, and La traviata, with Jana Šrejma Kačírková (Violetta), Peter Berger (Alfredo), and Svatopluk Sem (Germont).

The NdB ballet ensemble is celebrating 100 years in existence in the season 2019/2020. “It’s a great sensation, there are not that many ensembles with such a long and rich history. It is an honor for me, the dancers and the whole team to be present at the dawn of a new century of NdB Ballet in Brno,” commented Mario Radačovksý, head of the NdB Ballet.

The “Summer Ballet Cocktail”, the successful series of open-air performances from the Brno National Theatre Ballet, will continue into the first days of September in Biskupský dvůr.

On September 24 and 27 “Swan Lake“, a legendary title synonymous with the word “ballet”, will take to the stage of Janáček Theatre.

The NdB ballet features “Swan Lake” with the traditional choreography by Marius Petipa and Lev Ivanov, under the experienced lead of the prominent longtime ballet master of La Scala, Robert Strajner. The performance will feature spectacular and original stage design by Peter Horne and costumes from Roman Šolc.

Brno Daily is a media partner of NdB, focusing on its English-friendly production.

https://brnodaily.cz/2019/08/31/culture/national-theater-in-brno-english-friendly-drama-opera-and-ballet-in-september/https://brnodaily.cz/wp-content/uploads/2019/08/ndb-september-1024x683.jpghttps://brnodaily.cz/wp-content/uploads/2019/08/ndb-september-150x100.jpg2019-08-31T13:36:50+02:00BD StaffArt & CultureBrno,Brno Expats,Culture,English-friendly,TheatreAfter the theatre holidays, the three theatre houses of the National Theater in Brno (NdB) open their doors again for both Czech and international theatre-goers. In September, the drama house of NdB will be staging three popular performances with English subtitles at its home at Mahen Theatre. Opera will...BD StaffBD Staff team@brnodaily.czAdministratorBrno Daily - English News and Events in Brno.Brno Daily