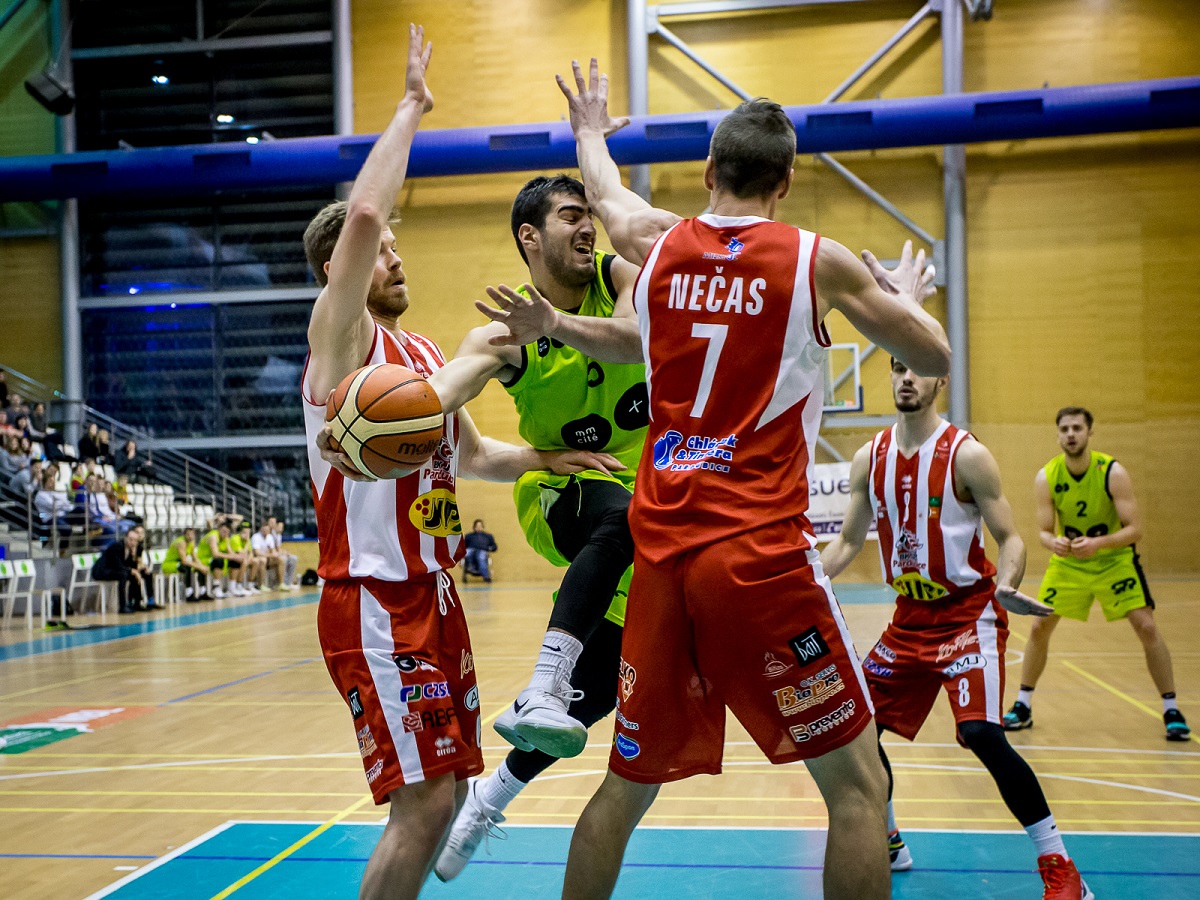 The Brno men’s basketball team has struggled to a 25-51 record over the past two seasons. New coach Lubomir Růžička hopes to turn things around when the 2019-20 season starts in the fall. Photo credit: Jan Russnak.

Brno, Jul 3 (BD) — Draci and Hroši resume play in extraliga Top6; Brno Cricket Club is runner up in both T20 divisions; FC Zbrojovka and SK Líšeň have two and a half weeks of training before start of Fortuna: Narodni Liga season; HC Kometa Season starts Sept. 13; and the Brno sports results and schedule.

Lubomir Růžička has been named the new head coach of the Brno men’s basketball team.

Last season was Brno’s best, but it was an up-and-down ride that started strong, slumped enough to prompt a head coaching change, recovered enough for advancement into Group A1 and spurted forward with two wins to provide hope in the early stages of Group A1 play. Unfortunately, the team could not get traction against USK Praha in the pre-Playoff Series and lost the best-of-three-game series, 2 games to 0, and finished with an overall record of 11-25.

Růžička, 34, has established himself as a top coach over the past decade. In addition to four titles in six years with youth players in Pardubice, he has had successful stints in Prostějov, Svitavy and league powerhouse Nymburk. He was also an assistant coach with the Czech men’s national team.

Last year, he coached Svitavy to second place in the regular season with a record of 22-14.

“We chose Lubomír mainly because he is a very good and experienced coach who has the same philosophy as our club,” Jimramovský said. “He has a desire to work with young players and I believe that it will be of great benefit to both their career development and the whole club.”

Said Růžička, who signed a two-year contract with Brno: “I like the fact that the club wants to build a roster of young Czechs, supplemented by two to three foreign players. I look forward to a new team and a new environment. There is a lot to do with assistants and guidance before the start of team training — both with the roster composition and with the planning of individual players’ current preparation. Last but not least, I look forward to Brno fans.”

Previous coaches were unable to get the team to a respectable position in the standings. Slovenian Dejan Jakara led the team to a 14-24 record in 2017-18 and to 3-4 before he left the team in early November of the 2018-19 season. Czech assistant Martin Vaněk stepped in as the provisional coach for two losses. Then, Greek Christianos Chougkaz took control of the team, leading it into Group A1, a loss in the pre-Playoff series and a final record of 11-27; the team was 8-21 under Chougkaz.

The Kooperativa NBL will being in late September. The schedule has not yet been announced.

After a two-week break, the Top6 phase of the extraliga baseball season will resume with Eagles Praha (8-1) leading the way and Arrows Ostrava (6-2) in second.

The final results of the Czech Cricket Union T20 seasons are in: Brno finished second in both the first division and the second division.

You’d better buy a Zbrojovka Brno scarf because there will be some cold nights of football this season. FC Zbrojovka Brno has requested to use Friday night as its default for the 2019-20 season. Kick off will generally be 7 p.m.

Zbrojovka will begin it second season in the Fortuna: Narodni Liga on Friday, July 19 at 6 p.m. at FC Sellier & Bellot Vlašim.

SK Líšeň, on the other hand, will begin its first season in the league on the following day, Saturday, July 20, at home against FK Varnsdorf. Kick off is 5 p.m.

The first Zbrojovka home game will be against FK Pardubice on July 26 at 7 p.m.

True, the summer has only just begun. But, this is the Czech Republic, and ice hockey is never far away.

https://brnodaily.cz/2019/07/03/sport/brno-sports-weekly-report-basket-brno-announces-ruzicka-as-new-head-coach/https://brnodaily.cz/wp-content/uploads/2019/07/basketbrno030719-1024x768.jpghttps://brnodaily.cz/wp-content/uploads/2019/07/basketbrno030719-150x113.jpg2019-07-03T10:52:09+02:00Bruno ZalubilSportBasketball,Brno,Expats Czechia,SportThe Brno men’s basketball team has struggled to a 25-51 record over the past two seasons. New coach Lubomir Růžička hopes to turn things around when the 2019-20 season starts in the fall. Photo credit: Jan Russnak. Brno, Jul 3 (BD) — Draci and Hroši resume play in extraliga Top6;...Bruno ZalubilBruno Zalubilbzalubil@hotmail.comAuthorA connoisseur of the unpredictable and unscripted drama of sports.Brno Daily