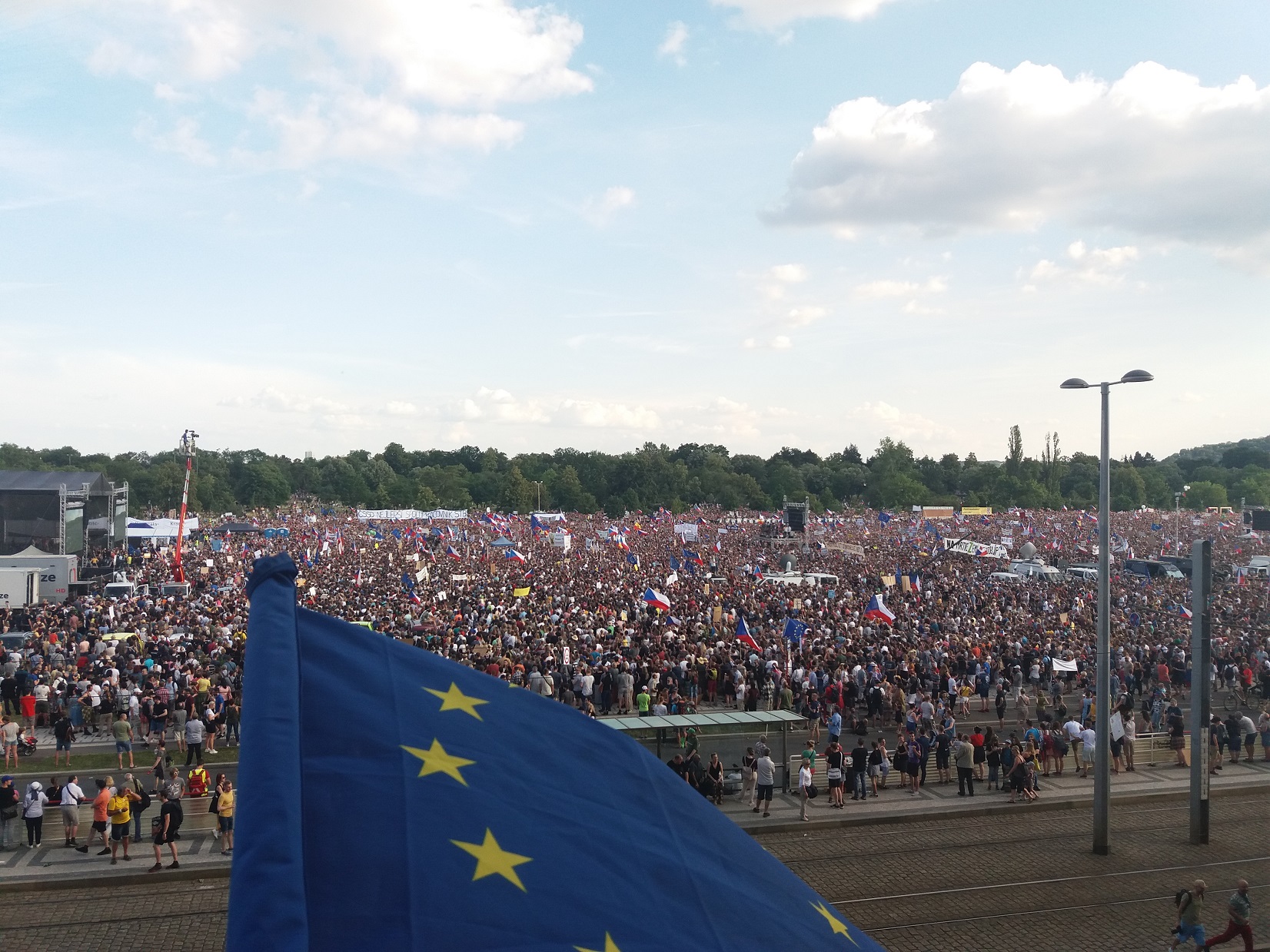 Yesterday, over 250,000 people gathered in Letná in Prague to express their discontent with the current government, led by Prime Minister Andrej Babis. Photo credit: Jack Stephens.

Brno / Czech Rep., Jun 24 (BD) – The protest was organised by campaign group Milion Chvilek Pro Demokracii [“One Million Moments For Democracy”], who are behind the anti-government protests that have been held in hundreds of towns and cities around the Czech Republic for the past two months. The protests have continued to grow, culminating in a national event on 4 June in Wenceslas Square attended by an estimated 120,000 people, and yesterday’s protest in Letna, which according to data from mobile operators was joined by around 250,000 people.

The protests were sparked by developments in the investigation into the financial affairs of Prime Minister Andrej Babiš and the Agrofert Group, the holding company he created to operate his business empire. A recent preliminary audit report from the audit of European Commission found Babiš guilty of conflict of interest related to EU subsidies received by Agrofert, in a case known as the “Stork’s Nest” Affair, after the Agrofert-owned recreational complex near Prague which is at the centre of the investigation. Following the release of the report, Babis replaced the Minister of Justice with Marie Benesova, who has always been a public supporter of him and a close friend of his ally, President Milos Zeman. Critics accused Babis of replacing the Minister of Justice in order to block the progress of the investigation, sparking the current protests. (Read more about the background of the protest in our previous article: “Large Protest of Up To 500,000 People Planned For Prague’s Letná Park This Sunday“.)

In response to the conflict of interest allegations outlined by the EU audit last week, the parliamentary opposition parties ODS, Piráti, KDU-ČSL, TOP 09, and STAN announced that they would seek a vote of no-confidence in Babiš’s minority government, which consists of ANO and ČSSD with support from the Communist Party. The no-confidence vote is planned for this Wednesday.

Brno Daily was at the event in Letná and we will provide more analysis and reaction to the event in the coming days.

https://brnodaily.cz/2019/06/24/news/politics/quarter-of-a-million-czechs-protest-in-prague-against-prime-minister-babis-and-justice-minister-benesova/https://brnodaily.cz/wp-content/uploads/2019/06/Letna-protest-1024x768.jpghttps://brnodaily.cz/wp-content/uploads/2019/06/Letna-protest-150x113.jpg2019-06-24T10:49:37+02:00Jack StephensPoliticsBabiš,Czech Republic,PoliticsYesterday, over 250,000 people gathered in Letná in Prague to express their discontent with the current government, led by Prime Minister Andrej Babis. Photo credit: Jack Stephens. Brno / Czech Rep., Jun 24 (BD) - The protest was organised by campaign group Milion Chvilek Pro Demokracii , who are behind...Jack Stephens jack.stephens50@gmail.comAuthorA writer and English teacher originally from London who has lived in Brno since 2011, interested in politics, low culture, and all things strange and/or Czech.Brno Daily

A writer and English teacher originally from London who has lived in Brno since 2011, interested in politics, low culture, and all things strange and/or Czech.
View all posts by Jack Stephens →
« RWS Moravia’s Growth Prompts New Flagship Brno Office
Conference on Program for Water Management and Sustainability Projects in South Moravia »