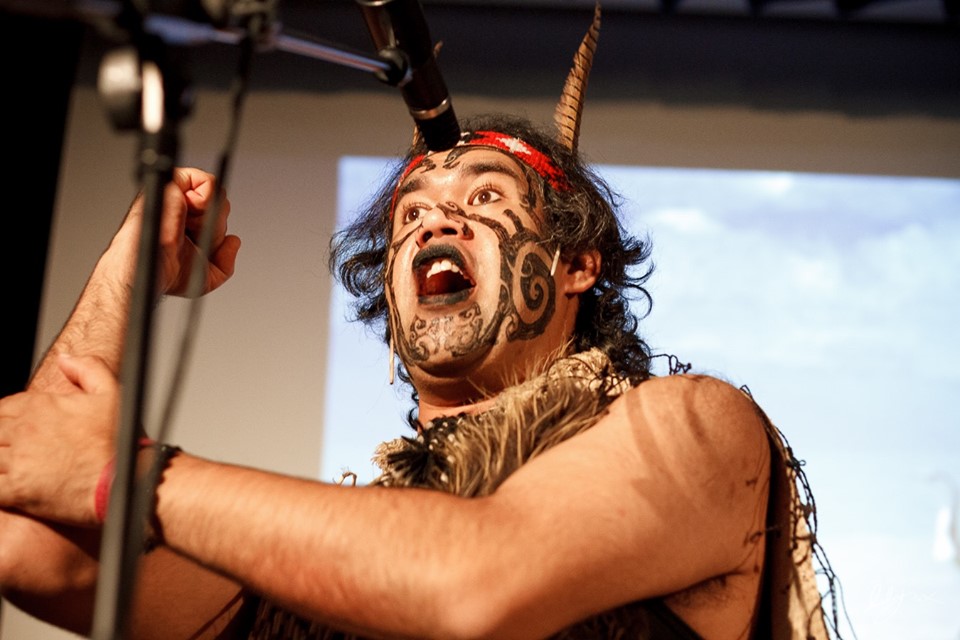 Brno, May 31 (BD) – Whakaari Rotorua’s tour of the Czech Republic started on April 25 and will continue until July 23, presenting Maori culture to Czech people and aiming to emphasise the already strong links between the two cultures. The first Czechs arrived in New Zealand 155 years ago, coming from Stod in the Plzen Region to found the settlement of Puhoi, where their descendents still live. The first settlers from Moravia arrived ten years later.

According to Frank Grapl, the group’s leader, the Czech heritage in New Zealand is still visible and growing every year, with a number of Czech schools around the country for children to learn the language, and also many Czech cultural events that include food, art and music festivals, and exhibitions of Czech heritage. Grapl is himself half-Czech; his father is from Brno originally, but left in 1950 having been sent to a forced labour camp by the communist regime for speaking out in favour of democracy and freedom. He met Frank’s Maori mother in Rotorua, where Frank still lives today.

Frank told Brno Daily that he feels closely connected to his father’s country, having visited 19 times starting from the age of four. Famous Czechs including Vaclav Havel, Alexander Dubcek, Jarda Dusek, Dan Landa, and Chinaski have stayed at his family home during visits to New Zealand.

He can identify some differences between his Czech and Maori roots: “Maori are more straightforward, relaxed and less stressed people. Czechs in general are more reserved and conservative when they first meet each other as strangers.”

The tour will arrive in Brno on June 4, with an evening of traditional Maori song and dance at ArtBar Druhy Pád. The evening will also include a discussion of the links between Czech and Maori culture, and the group will end the evening by teaching everyone how to do New Zealand’s famous dance, the Haka.

The group also plans to stage a world record attempt for the most people doing the Haka, in Wenceslas Square in Prague on November 17, to mark 30 years since the Velvet Revolution. They are aiming to include 60,000 people in the event.

Get the news first! Subscribe to our daily newsletter here. Top stories of the day in your mailbox every morning

https://brnodaily.cz/2019/05/31/events-in-brno/czech-maori-cultural-organisation-to-visit-brno-as-part-of-national-tour/https://brnodaily.cz/wp-content/uploads/2019/05/Whakaari-Rotorua.jpghttps://brnodaily.cz/wp-content/uploads/2019/05/Whakaari-Rotorua-150x100.jpg2019-05-31T08:46:02+02:00Jack StephensEvents in BrnoBrno,Culture,Czech Republic,Dance,Events in Brno,Festival,MusicThe tour by Czech-Maori organisation “Whakaari Rotorua” is marking 155 years since the first Bohemians landed in New Zealand, and 145 since the arrival of the first Moravians. Photo credit: Courtesy of Whakaari Rotorua. Brno, May 31 (BD) – Whakaari Rotorua’s tour of the Czech Republic started on April 25...Jack Stephens jack.stephens50@gmail.comAuthorA writer and English teacher originally from London who has lived in Brno since 2011, interested in politics, low culture, and all things strange and/or Czech.Brno Daily

A writer and English teacher originally from London who has lived in Brno since 2011, interested in politics, low culture, and all things strange and/or Czech.
View all posts by Jack Stephens →
« Ceremonial Opening of the Meeting Brno Festival
National Theater in Brno: June Highlights »