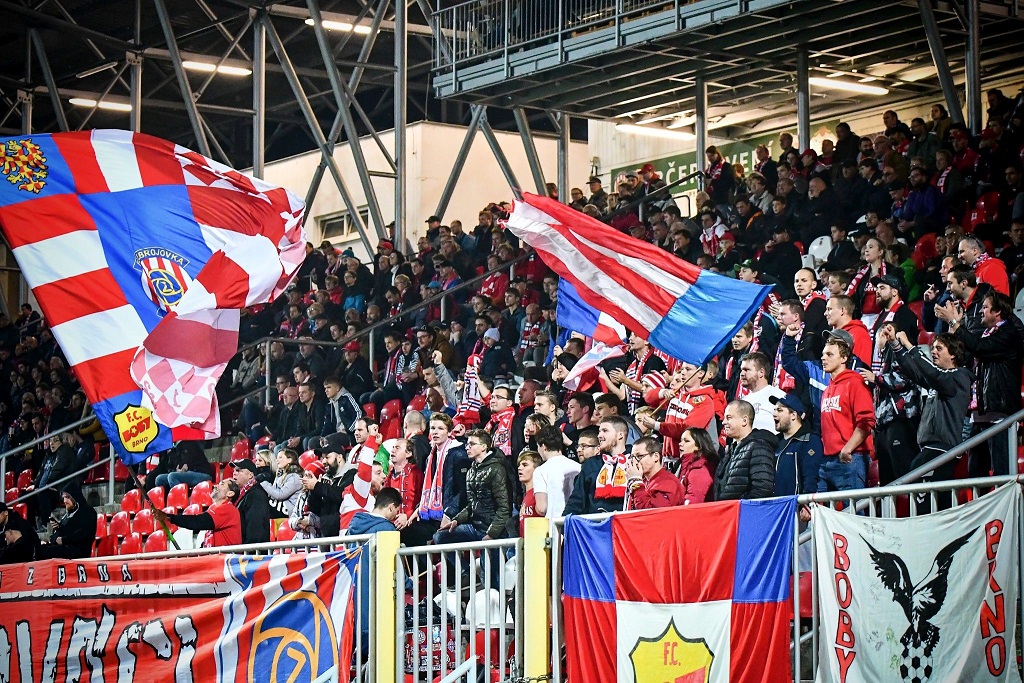 The stands were packed Tuesday night and the fans serenaded FC Zbrojovka after an important 2-0 victory. Photo credit: FC Zbrojovka.

In front of more than 4,000 people and a national television audience on Tuesday evening, FC Zbrojovka won a game it had to win in order to keep its hopes alive to return to the top league of football in the Czech Republic when it beat FC Hradec Králové, 2-0.

Zbrojovka needs to finish the Fortuna:Narodní Liga season in at least third place in order to have a chance to advance into the Fortuna:Liga next season; fourth place means a second year in the second league.

The Hradec Králové game was a must win to save the season, and Zbrojovka took advantage of some fortuitous chances. Štepanovský got his first goal late in the first half when he ran after a ball that had drawn the goalkeeper out into the field; when the goalkeeper slipped and fell, Štepanovský had a step on a defender and tapped the ball into the goal.

Four minutes later, a Hradec Králové player was shown a red card and Zbrojovka would enjoy a man advantage through the second half.

In the 83rd minute, Štepanovský scored again. Strangely, a Hradec Králové player appeared injured, yet his teammates continued play over his prone body; when Zbrojovka gained control of the ball, they followed suit and did not stop play — and instead moved the ball to the goal and Štepanovský for the insurance goal.

On Saturday, Zbrojovka beat FK Baník Sokolov, 0-2, with goals from Michal Škoda at the end of the first half and Ondřej Pachlopník at the beginning of the second half. For Pachlopník, 19, it was his first score in four games (and first start) with the top squad in the Zbrojovka system.

Brno most likely needs to win its remaining three games in order to have a chance at promotion. The teams travels to eighth-place Vítkovice (9-7-10, 34) on Saturday, plays its final regular-season home game against 10th-place Třinec (8-6-12, 30) on May 18 and then finishes the regular-season at second-place Jihlava (16-5-5, 53) on May 25.

FC Lokomotiva-Horní Heršpice will host FC Viktoria Plzeň this Saturday at 11 a.m. at its field in South Brno. Lokomotiva is in the lower bracket of the country’s top women’s football league. They were able to get a point last Sunday when they tied host FC Hradec Králové, 1-1.

The eight-team league split evenly into a Championship Bracket and a Playout Bracket after the first 14 rounds. Lokomotiva needs to survive the lower bracket in order to stay in the top league next season. Lokomotiva started play in the Playout Bracket with a 1-1 tie at FC Viktoria Plzeň.

Lokomotiva had a chance to reach the top flight of the restructured league, but they were unable to beat 1. FC Slovácko in the final game of the regular season. They lost in the final minute of the league’s most-attended game of the season.

The second-team of the Lokomotiva-Horní Heršpice football club won the Czech Cup for their division when they beat Viktorie Plzeň, 5-1, last Wednesday.

The Brno Sígrs beat the Brno Alligators in the first Battle of Brno, 22-35, on Friday.

Veteran quarter Tomáš Fortelný brought the Alligators (0-4) back into the game in the second half when he threw two touchdown passes, a 7-yarder to David Michálek midway through the third quarter and a 4-yarder to Jaroslav Doležal with 9:33 left in the game.

Fortelný also connected with Doležal for a 24-yard touchdown in the second quarter.

Battle for Brno II will be Saturday, June 22, on the same field in Bystrc at 5 p.m.

Brno Cricket Club beat the host Prague Barbarians Cricket Club on Saturday to even its record in the young T20 League season. Brno was 110-3, from 16 overs; Prague had gone 108-7 from 20 overs.

Brno will open its home season this Saturday against Vinohrady Cricket Club at 3 p.m.

A connoisseur of the unpredictable and unscripted drama of sports.
View all posts by Bruno Zalubil →
« Police Searching for Hit-and-Run Suspect
Week of the City: a Festival Celebrating Brno »