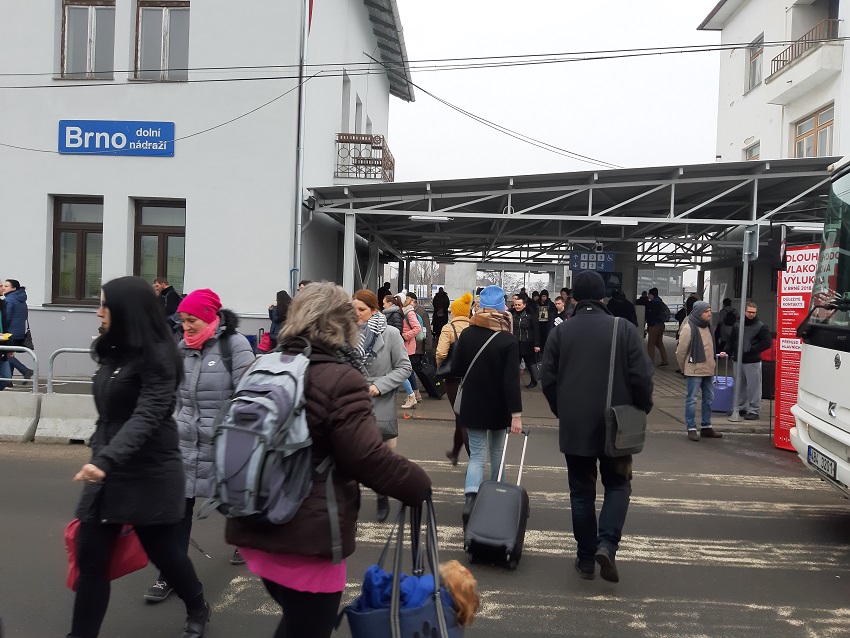 Brno Daily has been down to Dolni Nadrazi to talk to passengers about what it’s like using the temporary station. Photo Credit: KK.

Brno, Feb 17 (BD) – By now, many Brno residents have had to catch trains from Dolni Nadrazi, the temporary station that is being used for most of the rail traffic in and out of Brno while extensive works are being carried out at the main station – works that are scheduled to take around a year to finish. In recognition of how long this situation will be in place, the city announced some revitalisation of the area around Dolni Nadrazi (Read more in our previous story: “Lower Station in Brno to Get a “Facelift” in Spring”). However, this work won’t happen until the end of April, so, for now, passengers using the station are stuck with what’s there now. We spoke to some of those passengers about their experiences.

One passenger, Laura, used the station for the first time about a week ago and was dismayed by the lack of facilities: “I had a good chance and enough time to explore Dolni nadrazi as my train was 40 minutes delayed. I bought a coffee from a coffee machine in a waiting container, literally a container, like the one they have on construction sites, that was packed with people because it was a cold day. Unfortunately, that meant it smelt very bad of body odour. As the delay was extended I went to the bathroom in the main concrete building. The workers were finishing the faucets and everything was brand new. It made me wonder what people were doing before, as the workers had apparently just finished.”

Aside from the lack of facilities, one thing that has annoyed many Brno residents is the inconvenience of having to get a separate bus. A passenger travelling with her whole family, Anne, explained: “Getting to the Dolni station and getting into town from there simply isn’t as easy as it was. It’s not the hellscape people make it out to be, but it’s definitely an added inconvenience, especially for people who don’t speak Czech. It doesn’t make a good first or last impression of Brno.” Another passenger, Gianni, agreed: “There’s a really nice view of Spilberk and Petrov that cannot fail to remind you of how far you actually are from the city centre.”

The city authorities have responded in part to these problems, recently announcing plans to move the bus stop closer to the station and add parking facilities for those picking up and dropping off.

According to Petr Kratochvil (ODS), the city council member for transport: “The measures we are gradually adopting should contribute to the comfort of passengers who are forced to use this railway station. We believe that the planned parking lot, which will allow you to bring or pick up your loved ones from the station, will be a welcome improvement for the people of Brno.”

Overall, passengers don’t seem impressed with the new arrangements. But it’s not all bad news. As Anne said: “It’s still less unpleasant than a bus in or out of Zvonarka.”

https://brnodaily.cz/2019/02/17/news/transport/reality-check-travelling-from-the-temporary-station-dolni-nadrazi/https://brnodaily.cz/wp-content/uploads/2019/02/Dolni-nadrazi-Brno-8.jpghttps://brnodaily.cz/wp-content/uploads/2019/02/Dolni-nadrazi-Brno-8-150x113.jpg2019-02-17T10:38:36+01:00Jack StephensTransportBrno,News,Tourist,Transport,Urban PlansBrno Daily has been down to Dolni Nadrazi to talk to passengers about what it’s like using the temporary station. Photo Credit: KK. Brno, Feb 17 (BD) - By now, many Brno residents have had to catch trains from Dolni Nadrazi, the temporary station that is being used for most of the rail...Jack Stephens jack.stephens50@gmail.comAuthorA writer and English teacher originally from London who has lived in Brno since 2011, interested in politics, low culture, and all things strange and/or Czech.Brno Daily

A writer and English teacher originally from London who has lived in Brno since 2011, interested in politics, low culture, and all things strange and/or Czech.
View all posts by Jack Stephens →
« New Play in English from BEST Divadlo, “Wenceslas Square”
In Pictures: Voting Underway to Choose Design for Zone 2 of Nová Zbrojovka »