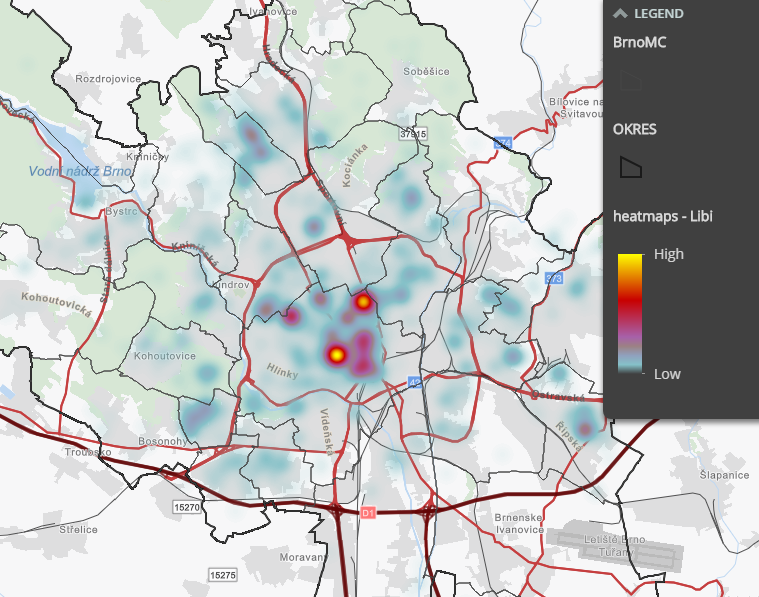 For a newly published “Emotional Map” of Brno, the City Authorities turned to the people who know it best: the local residents. Images: MMB.

Brno, Jan 31 (BD) – The map was created between Spring and Autumn and comes two years after the first map of this kind. However, this time the survey used different questions and focused more on individual urban districts. Questions used for the new map included:

Deputy Mayor Tomas Koláčný (Piráti) summarised the results: “The results are clear: people like districts with a lot of greenery, such as Lužánky, Špilberk, Kraví hora, Holedná, or Palackého vrch, places with a higher quality of living such as Medlánky or Kohoutovice, or districts such as Masarykova čtvrť with a combination of both characteristics.” These places were often described as “quiet and relaxing, with a pleasant atmosphere.”

At the same time, the map confirmed the findings of the 2016 map project, that the city’s most troubled areas are the area around the railway station, Cejl, and Mendlovo namesti. The words most commonly associated with these areas include “dirt, stress, fear, unpleasant surroundings, bad smells, rubbish, and excessive advertising.”

In general, respondents commented that the city needs more greenery instead of asphalt and concrete, as well as public toilets and benches for rest and shade during the summer months. Brno residents would also appreciate more available drinking water, and more information signs in the subway under the railway station.

The survey indicates that “Brňáks” see the historical center of Brno, along with the adjacent areas of Špilberk and Lužánky Park, to be the centre of Brno and the beating heart of the city’s life, with secondary centres also mentioned including náměstí Míru on Kraví hora, Slovanské náměstí in Královo Pole or Přemyslovo náměstí in Slatina.

The results also highlight areas for future development: “These areas are the so-called Southern Center and Zábrdovice. People also identified other sites of interest with great development potential, including the former Zbrojovka complex, the area around Vaclavská and Mendlovo náměstí, and places further outside the centre such as the area behind the Zetor complex in Líšen,” added Koláčný.

These results will now be passed on to Brno City Council and the councils of the city’s districts, and used as the basis for preparations for the city’s new Action Plan, #Brno2050, to be completed in 2020. A detailed breakdown of the map and its results can be viewed here.

https://brnodaily.cz/2019/01/31/news/politics/new-emotional-map-measures-public-opinion-of-brnos-city-districts/https://brnodaily.cz/wp-content/uploads/2019/01/emotional-map-brno.pnghttps://brnodaily.cz/wp-content/uploads/2019/01/emotional-map-brno-150x118.png2019-01-31T15:12:21+01:00Jack StephensPoliticsBrno,Environment,lifestyle of health and sustainability,News,Politics,Urban PlansFor a newly published “Emotional Map” of Brno, the City Authorities turned to the people who know it best: the local residents. Images: MMB. Brno, Jan 31 (BD) - The map was created between Spring and Autumn 2018, and comes two years after the first map of this kind. However, this time...Jack Stephens jack.stephens50@gmail.comAuthorA writer and English teacher originally from London who has lived in Brno since 2011, interested in politics, low culture, and all things strange and/or Czech.Brno Daily

A writer and English teacher originally from London who has lived in Brno since 2011, interested in politics, low culture, and all things strange and/or Czech.
View all posts by Jack Stephens →
« Free WiFi on Brno City Transport; Trial Starts on Friday
CZK 66 Million from City Budget Allocated to Sports Clubs; A Quarter of the Total Will Go To Kometa »